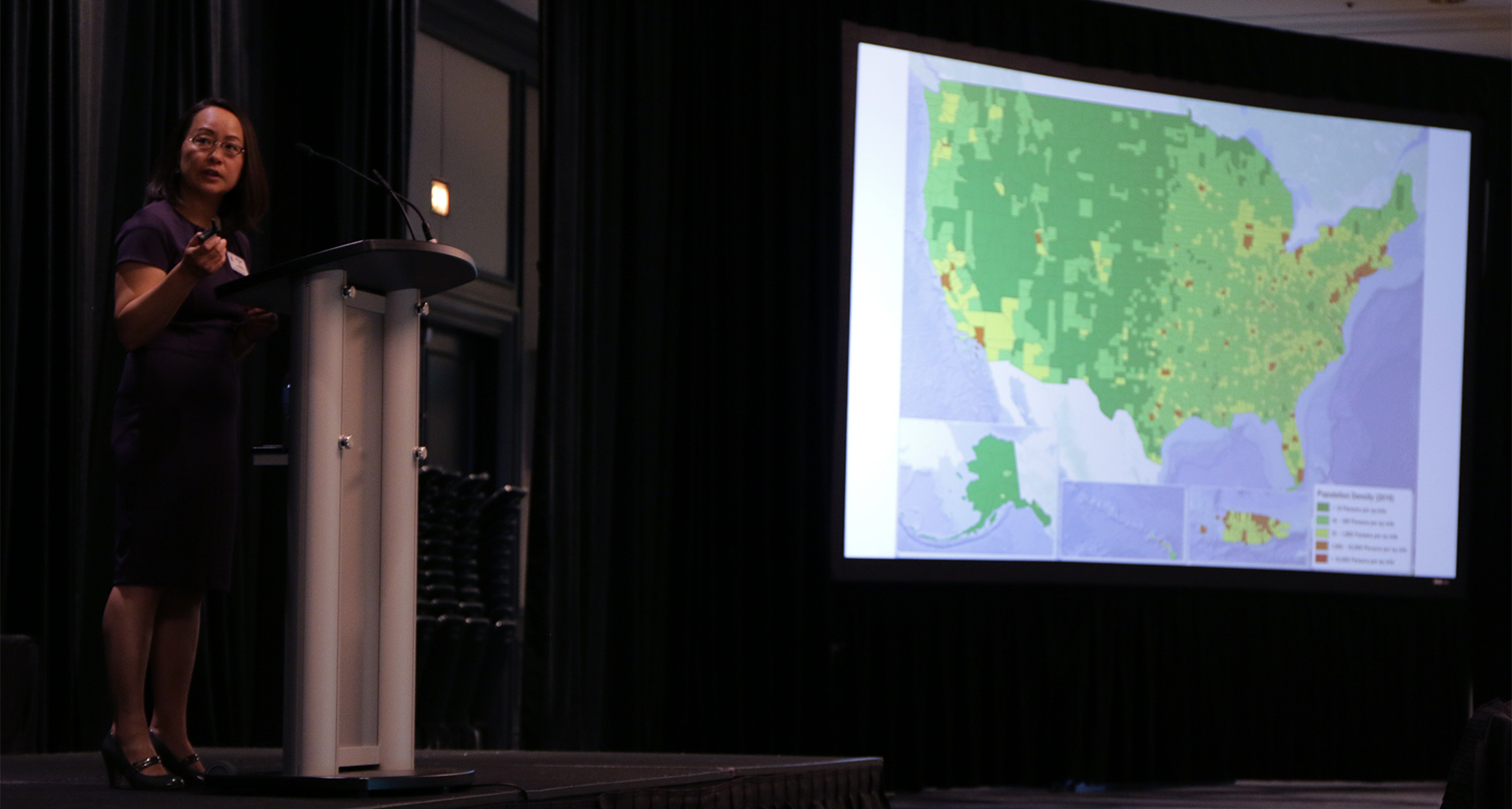 Jihyun Oh, director of Mid Council Ministries, illustrates a population shift in the U.S. over a 10-year period. Photo by Fred Tangeman.

Anyone who has taken part in a whitewater rafting trip knows there are times where you can relax and other times when you have to navigate some very rough water. That’s the analogy leaders in the Office of the General Assembly used in their discussion on day one of the Mid Council Leaders Gathering in Baltimore.

Hundreds gathered for the three-day conference to delve into what it takes to be church in a time of change. Jihyun Oh, director of Mid Council Ministries, and the Rev. Tim Cargal, manager of ministry preparation and support within OGA, led a discussion on “Challenging Currents of Pastoral Leadership.” In their presentation, the two discussed shifts in urban/suburban populations over the past 10 years. 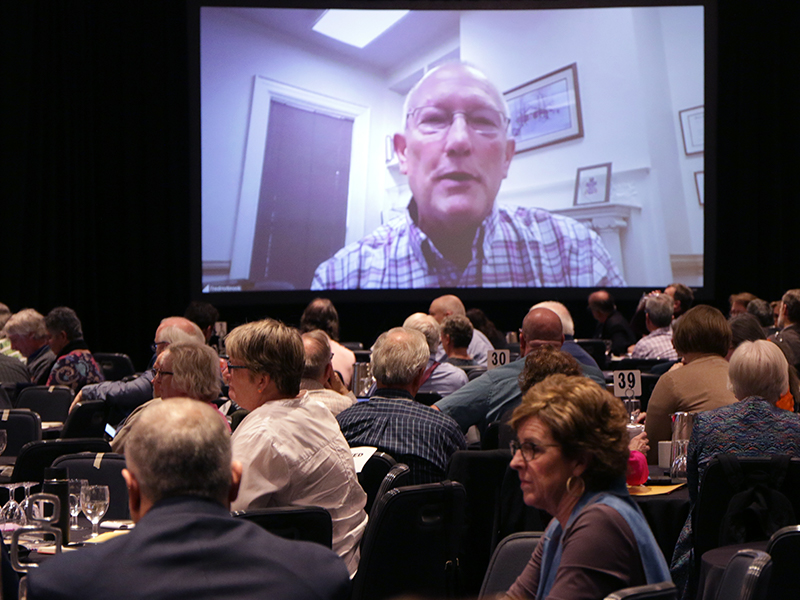 The Reverend Dr. Fred Holbrook, interim general presbyter and stated clerk with the Presbytery of the James, joins the Mid Council Leaders Gathering via Zoom. Photo by Rick Jones.

“There are population movements that are not in our control. Now we are beginning to see younger people moving into smaller towns and large communities,” said Oh. “We need to determine how the movement impacts the economic prospects of the area in order to have vital congregational witness and what models they will need to use”

Cargal says there are opportunities for churches in areas where the population is decreasing. 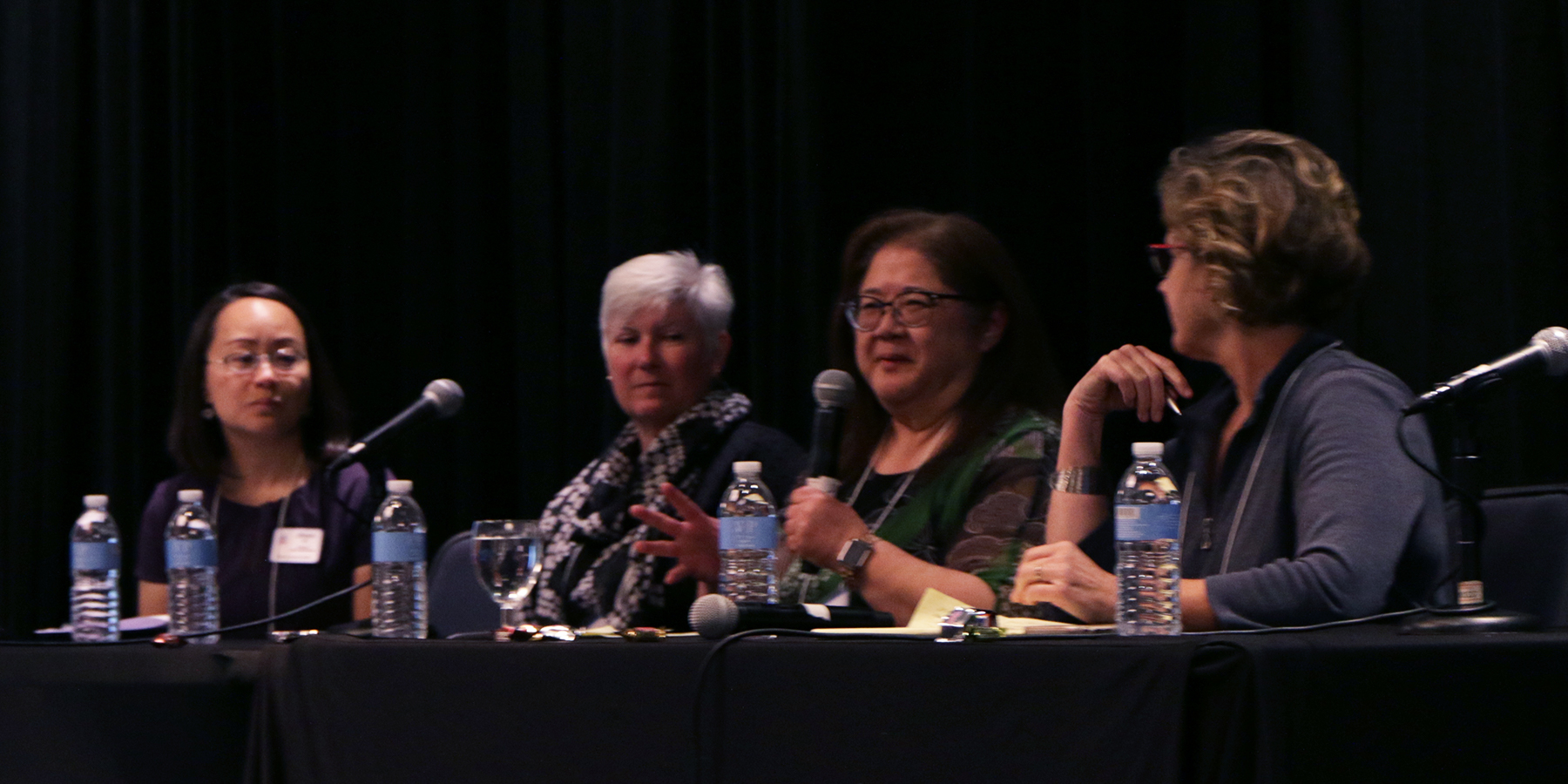 The Rev. Dr. Fred Holbrook, interim general presbyter and stated clerk with the Presbytery of the James, joined the conference via Zoom. He says churches need to consider new ways to minister.

“We have to figure how to swim along the shore and miss the riptide,” he said. “We are challenging currents in the church today, but I am encouraged and hopeful for the wild and crazy ways we are having to swim and avoid the riptide in order to support churches in our area.”

Attendees were given an opportunity to meet at their tables to assess their concerns and issues around pastoral leadership in changing times. Church leaders reviewed the input and shared some of those findings at the conclusion of the first plenary.

“There were large themes around personal relationship and building community and what we need to do. It’s very relational,” said the Reverend Tricia Dykers-Koenig, associate director of Mid Council Ministries in OGA. “How we are together as community was important as well as how we communicate with one another. Many felt it was important to walk alongside our presbyteries and congregations and listen. The need for assessment tools, technology, leadership development and sharing of resources were also discussed.”

Dykers-Koenig said imagination, openness, creativity, exploration, experimentation and not being afraid to fail were among the other themes raised among attendees.

“We will take this information that has been provided, read it more carefully, and send a full assessment back through the mid council relations newsletter,” she said. “We hope they will continue to talk with each other about these issues.”

The afternoon plenary focused on “Being Church While in Transition and Shifting Boundaries.”

The conference continues with additional plenaries and workshops on Saturday. The gathering concludes on Sunday with worship and additional discussion. The MCLG will be followed by the meeting of the Association of Stated Clerks.