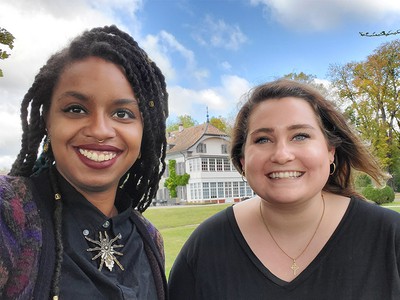 Two recent Presbyterian seminary graduates are being given an opportunity to study ecumenism from one of the top institutes in the world. Margo Richardson and Quantisha Mason are the newest Eugene Carson Blake Scholars, who are now enrolled at the World Council of Churches' Ecumenical Institute in Bossey, Switzerland.

The international centre is one of the leading institutes that brings together diverse cultures, backgrounds, and churches for study and personal exchange.

“This truly feels like the most generous, once-in-a-lifetime opportunity,” said Richardson. “Even though I may not know what the future holds, I know that God was calling me to this place, and I am so grateful that the PC(USA) gave me the opportunity.”

Richardson graduated in May with a Master of Divinity degree from Columbia Theological Seminary.

“The PC(USA) has done so much for me that it is hard to put into words,” said Mason. “Not only have I been supported financially, I have felt at home within our church. I have been given platforms to speak from and been allowed to ask hard questions.”

Mason is a young adult volunteer (YAV) alumna who is vibrantly engaged in the work of the church.

“Mason and Richardson bring many gifts to the work of ministry, which include passion and critical theological thinking,” said Everdith Landrau, manager of ecumenical relations with the Office of the General Assembly. “This is why the General Assembly Committee on Ecumenical and Interreligious Relations (GACEIR) made the bold decision to award both students the Eugene Carson Blake Scholarship.

“I live into my ministry believing that Christians must reassert our identity as God’s beloved children,” said Richardson. “I believe that as a Christian leader, it is my responsibility to work with others in God’s light so that we may see and believe this common identity, rooted in the love God shows to us in the person of Jesus Christ.”

Richardson says Columbia Seminary gave her several opportunities to travel, study, and intern abroad during the three years of her MDiv studies.

“After my first year of seminary, I felt that God was calling me to expand my horizons and engage in ecumenical work through interning at a church in South Africa,” she said. “This experience was beyond transformative and has served as a huge step in my discernment process that has now led me to feeling called to this rewarding and vulnerable work.”

For Mason, the opportunity to work overseas has been impactful.

“I had the privilege to spend a year as a young adult volunteer where I served in South Korea,” she said. “Since then, I have had the honor to return to Korea as a member of a peace delegation by the discretion of General Assembly.”

Eugene Carson Blake was a Stated Clerk of the General Assembly who served as the president of the National Council of Churches as well as general secretary of the World Council of Churches. The scholarships, named in his honor, are awarded to individuals with a strong interest or commitment to ecumenical engagement, participation in PC(USA) congregations, academic ability, and the potential for ecumenical and interfaith partnership with a church in the future.

Richardson believes the biggest challenge she faces in the future is working in a world where differences create division and conflict.

“I believe difference and diversity among groups of people should be a welcome reality, as we offer our diverse histories, gifts, and perspectives across lines of division,” she said. “I hope, with God and the PC(USA), to continue to find opportunities for ecumenical dialogue in a more formal capacity after my studies at the Ecumenical Institute.”

“Getting others to see the importance of ecumenical relations and active truth-telling in an age of oppression is a challenge,” she said. “I believe if we are going to survive and thrive as a church, we must first look to ourselves and our position in this world and make a stand.”

Both Richardson and Mason believe that in order for young people to make a difference, they must get involved and not be afraid to speak up.

“I feel called with excitement to create spaces for younger Christians to engage in ecumenical dialogue,” said Richardson. “I believe that dialogue is the stepping stone for reconciliation, and I believe that young voices need to be given more opportunities to sit and speak at the table.”

Mason says people of faith should stand “loud and proud” in the face of adversity and work toward something more beautiful than can be imagined.

“Ecumenical work is as much Christian apologetics as it is turning inward with a hermeneutical eye and looking at yourself and faith with suspicion,” she said. “Just because the reality is hard does not mean we get to check out or stand at the back of the room.”

Topics: Office of the General Assembly