Co-Moderator sees progress in the inclusion of women 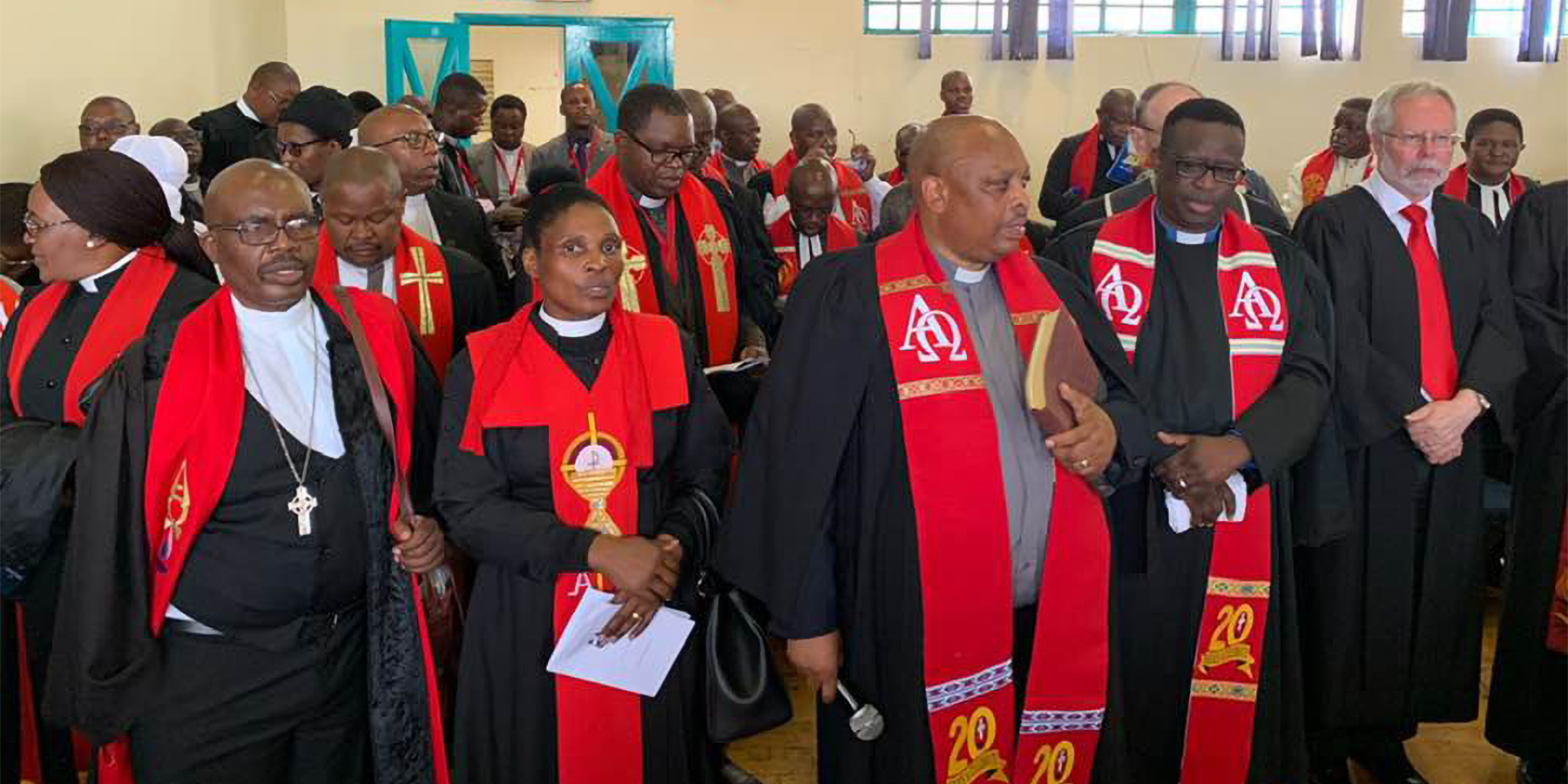 A delegation from the Presbytery of Northern New England (PNNE) recently traveled to South Africa to commemorate a 20-year partnership with the Presbytery of Amathole in the Eastern Cape around East London, South Africa. The delegation included the Rev. Cindy Kohlmann, Co-Moderator of the 223rd General Assembly (2018), who also serves as the PNNE’s resource presbyter.

“This partnership was in its beginning stages when the Presbyterian church in South Africa reunified after the end of apartheid, a celebration in 1999 that members of our presbytery attended,” said Kohlmann. “Being present at the 20th anniversary of that celebration and having the honor of representing the Presbyterian Church (U.S.A.) with my presence was an amazing honor.”

The group arrived in Port Elizabeth, South Africa, on the southern tip of the country, and spent three days in worship and celebrations, the first at the St. James Church, where Kohlmann participated along with other church leaders, including the moderator of the Uniting Presbyterian Church in Southern Africa.

“Once at St. James Church, I joined the other dignitaries at the front table while the rest of our groups found seats. It was not a surprise to me that I was the only woman at the front, and I could tell that the audience of mostly women were intrigued and curious,” said Kohlmann.

The Reverend Dr. Allan Boesak, the South African Dutch Reformed Church cleric, politician, and anti-apartheid activist, delivered the sermon, addressing violence against women and the church’s treatment of LGBTQI siblings, according to Kohlmann.

“He closed with a story that centered around wounds, the wounds of Jesus and our wounds as we follow the wounded Savior. He asked us what wounds we would show to the High King in the final judgment. What wounds have we incurred in the fight for justice and love?” Kohlmann said. “What wounds has the church inflicted, instead, as we have fought with each other and dismissed the ‘least of these’ from our midst as unsavory and unwanted? Which wounds will we have to show when we are confronted by Jesus with the wounds he received out of love for us?”

The celebration continued the following day at an open-air stadium with speakers and performers on the field and the crowds in the stands.

“Arriving at the stadium, the group of honored guests were brought to the top floor of the stadium, some to sit in the uppermost rows and some, including me, directed to glassed-in box seats,” said Kohlmann. “I joined the moderator and his wife, his chaplains, and a previous moderator of the Presbyterian Church of South Africa, one of the original denominations, who also served as moderator of the Uniting Presbyterian Church in South Africa (UPCSA), one of only two elders to do so in their history.”

“The event,” she said, “included a procession of presbyteries, music, dance and speaking.” 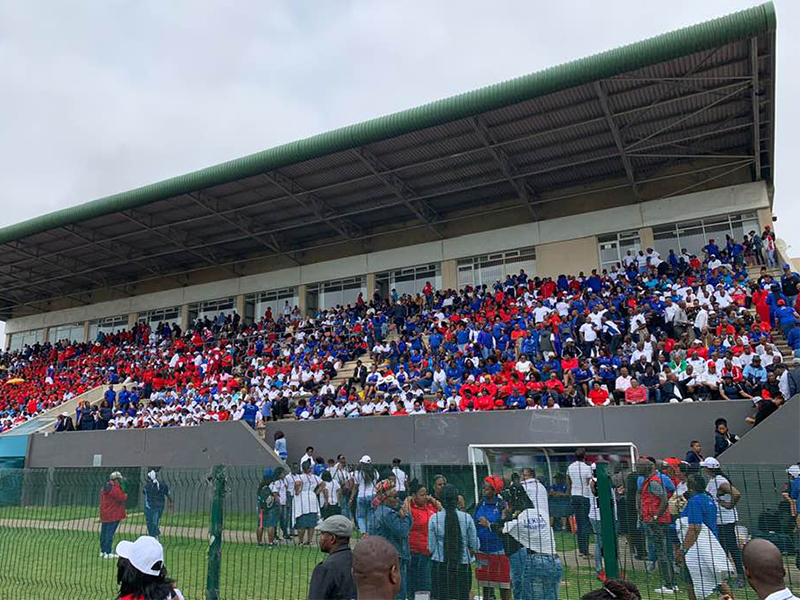 Kohlmann says the family of John Knox Bokwe, a legend in the Presbyterian Church in South Africa, was on hand to bring greetings. A representative of the municipality spoke about the scourge of violence against women and children, calling on the church to be active in responding to the problem.

“In fact, the UPCSA had prepared a proclamation declaring ‘No more!’ The church was called on to stop harboring men who abuse women and children and to do more to care for and protect those who had been targeted,” she said. “The group of honored guests, which were many, brought greetings before the moderator’s address, and were asked to limit our time since we were, not surprisingly, running late. There was so much joy in the celebration, so much singing and dancing, that it was hard to keep the program moving forward. A good problem to have!”

Kohlmann was among a group of guests that delivered greetings before the moderator’s address.

“I shared our commitment to be a Matthew 25 church, seeing Jesus in the face of the ‘least of these’ and responding with compassion, care and justice,” said Kohlmann. “I thanked the UPCSA for being partners in this mission and ministry, because we can’t do it alone. Certainly, if we want to establish the kingdom of heaven here on Earth, it will take all of us living as the hands and feet of Christ.”

Kohlmann presented gifts to the moderator, including a set of the new Book of Common Worship and Book of Daily Prayers. She also presented the moderator and general secretary with bracelets from Vision 2020.

The final day included a closing worship service. Kohlmann says she was thrilled to see the number of women clergy scattered throughout the crowd.

“The last time I was in South Africa in 2010, there were very few women studying to become ministers and they were engaged in a ferocious uphill battle in a very patriarchal society. In fact, every trip prior to this one, I was greeted by more than one person who was confused. ‘You’re a woman mfindisi [minister]? There are women pastors?’" she said. “I made it a point of speaking to many of the women in the room, some of whom had been in their congregations for almost five years. I even encouraged one to see if her presbytery would nominate her to stand for moderator-elect!”

Kohlmann says the crowd of worshipers and attendees topped 4,000.

“The congregation was singing as we processed, a swell of sound that was just glorious. Presbyterians can sing, and African Presbyterians can really sing,” Kohlmann said. “In a three-hour service, which is standard in the Xhosa-speaking churches I’ve visited, at least 1/3 if not 1/2 of that is singing and dancing. The time goes by quickly when surrounded by such music and joy!”

The Rev. Dr. Colin Cowan, General Secretary for the Council for World Mission, delivered the sermon, preaching on the theme “Living Our Legacy.” He addressed the major problems facing the world, including hunger, climate change and water scarcity, encouraging attendees to begin work now to address these problems.

Kohlmann says Cowan asked attendees to imagine the world they wanted to leave to their children and grandchildren, and then told the crowd the church has a major role to play in doing the work to create that world.

“It was a rousing sermon and much in line with what we in the PC(USA) are committed to: dismantling structural racism, eradicating systemic poverty and being vital congregations,” she said. “I firmly believe that a mark of being a vital congregation is engaging with our neighbors in order to establish justice. Until we are doing that work, we have not yet fully claimed the totality of who God wants us to be as the hands and feet of Christ.”

Kohlmann says there is still a lot of work to be done in the region, but she’s hopeful. “The work we have before us as a denomination mirrors the work before the UPCSA, and there is still plenty for us to partner around in the years to come.”