The Reverend Dr. Greg Ellison appears on Coffee with the Clerk 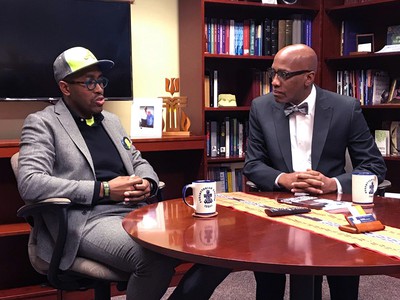 Churches, companies, nonprofit organizations, and seminary students are having hard conversations about how to connect in an ever-changing world. The Reverend Dr. Gregory C. Ellison, II, author of the book "Fearless Dialogues," shared his strategy for connecting different classes of people during this week’s broadcast of “Coffee with the Clerk,” with the Reverend Dr. J. Herbert Nelson, II, Stated Clerk of the General Assembly of the Presbyterian Church (U.S.A.).

Ellison is a familiar face to PC(USA) leaders across the denomination. Last year, he led a daylong seminar at the Mid Council Leaders Gathering in Chicago. Ellison is founder of Fearless Dialogues, a grassroots organization that creates opportunities for unlikely partners to engage in hard conversations, see the gifts in others, and work for positive transformation in self and others.

Ellison says the organization grew out of a conversation he had on a local NPR radio station about the struggle for marginalized people to be heard.

“As a young black professor who wrote about young black men, I was immediately coined as an expert, invited to do interviews on NPR and other stations. I recognized during those conversations that there was not a very healthy model for conversation in some of those spaces,” he said. “I was told I had 20 seconds to argue my point and then someone would rebut what I say. I would talk about 15 seconds and someone would cut me off. I thought to myself, I don’t even talk to those I don’t like this way; there has to be a different way for people to engage.”

Ellison is associate professor at Emory University’s Candler School of Theology. While on the air that day, he invited people to come to campus to discuss what was happening to young people in this country.

“As many as 400 people showed up and most were students. There were also single mothers with high school students, elected officials, drug dealers, police officers, and UPS workers,” said Ellison. “After an hour and a half of conversation, because we had created such a unique space with live music and artwork to stimulate conversation, nobody left. People stuck around. We realized we had stumbled on to something.”

Ellison says Fearless Dialogues has grown into a full-fledged nonprofit organization where unlikely partners engage in “hard and heartfelt” conversations.

“To date, we’ve worked with over 30,000 leaders, people in faith communities like mid council leaders, and 1001 (new worshiping) congregations, churches, corporate groups, professional sports team, universities, and schools, helping them to think through issues of implicit bias and conflict transformation and community building,” he said. “It provides people opportunities to relate to each other in more meaningful ways and to see the gifts in others and hear value in stories and work for change.”

Ellison says they base their work around three pillars: seeing, hearing, and change.

“If I cannot see the person in front of me that has something meaningful to say, see them as a whole person created in the image of God, there’s no way I could hear anything that they say that is meaningful and having possibility to contribute to my life and the life of our community,” he said. “However, a lot of corporations, faith communities, and educational institutions rush to change without first fully seeing the people around them and hearing the stories that give their lives meaning. Therefore, we believe if we can see or hear the individuals beforehand, any change created will not be sustainable.”

Referring to his meeting with mid council leaders last year, Ellison said they focused on what they must do to see how often unacknowledged individuals are overlooked because they lack a certain title or come from a different ZIP code.

“We used a series of interactive, theory-based experiments to move these people into deeper levels of vulnerability and connection,” said Ellison. “Experiments on hearing. After those relationships have been fostered, then we began to vision cast together and think about change in a different way.”

Ellison teaches pastoral care and counseling at Emory and seeks to help students who are entering all forms of ministry, whether it is parish ministry, chaplaincy, or working with nonprofits. His specialty is working with marginalized communities.

“At Emory, the classroom becomes a laboratory, an opportunity to think through some of the experiments we might utilize in communities and have students beta test them and think through what this might look like in applying some abstract theory that is palatable and relatable to a large community,” he said.

“My specialty is looking at marginalized communities. How do we care alongside of marginalized persons, as opposed to caring for them?” he asked. “How can you learn alongside persons who may not have the means that you do?”

Ellison says a third of every course he teaches takes students off campus and into conversations with community leaders.

“We may go to a foster home or to a community populated by immigrants and refugees,” he said. “We may spend time in a hospital learning alongside chaplains. Every year, I take students to a funeral home, which I believe is essential in preparing them to go into spaces where they face trauma and death. The worst thing would be for an esteemed minister to work with a grieving family without first understanding what it’s like.”