Home News ‘When things get difficult, we are here to do ministry together’

‘When things get difficult, we are here to do ministry together’ 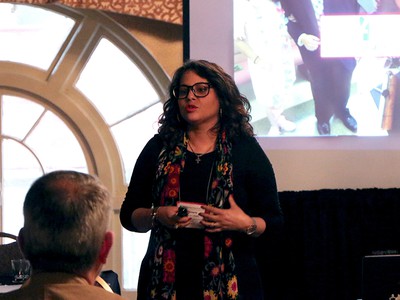 There’s a spiritual side to serving as a mid council moderator that’s every bit as important as “the Book of Order side,” Ruling Elder Vilmarie Cintrón-Olivieri, co-moderator of the 223rd General Assembly, said during a workshop at last week’s Moderators’ Conference she was co-hosting along with her fellow co-moderator, the Rev. Cindy Kohlmann.

“The body you serve is the body of Christ in the place God has called you,” she said. (Before being elected co-moderator of the 2018 General Assembly, Cintrón-Olivieri had been moderator of the Presbytery of Tropical Florida.) “The spiritual component goes further than we might imagine it does.”

Joining the co-moderator to lead the workshop “The Moderator as Spiritual Leader: Caring for Self and Others” was the Rev. Dr. George Goodrich, co-executive presbyter of Yellowstone Presbytery.

“You’ve heard the term ‘non-anxious presence,’” he said. “I am content to be a less-anxious presence.” Then he offered moderators-elect this encouragement: “You may have butterflies in your stomach” in the minutes before the first mid council meeting they’ll moderate. “At least make them fly in formation.”

“The Holy Spirit has chosen you, through the voice of your presbytery or synod, for such a time as this,” Cintrón-Olivieri said. “This is your time for a reason. We might think we don’t know enough or ‘What have I gotten myself into?’ You can’t moderate as another person did — you have to be you. Be vulnerable, and don’t force it.” 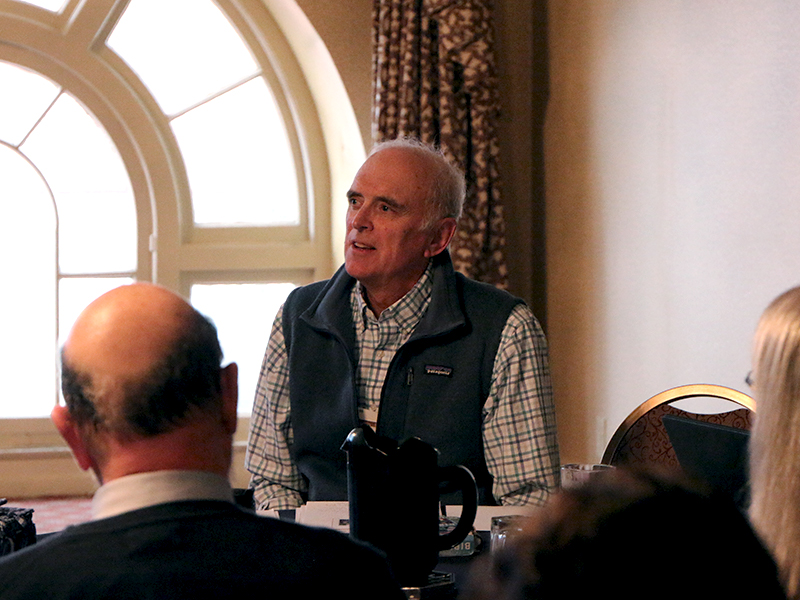 The Rev. Dr. George Goodrich, co-executive presbyter of Yellowstone Presbytery, speaks during the Moderators’ Conference Saturday. Along with Ruling Elder Vilmarie Cintrón-Olivieri , Goodrich co-taught a workshop called “The Moderator as Spiritual Leader: Caring for Self and Others.” Photo by Rick Jones.

Moderators are peacemakers and healers, Goodrich said. They also “represent the body of Christ when the meeting is not in session.” Moderators also help the presbytery or synod “be the church, God’s body gathered together,” he said. Part of their job is “to bring a sense of God’s closeness and transcendence, and we try to understand the times in which we live.”

In Yellowstone Presbytery, each presbytery meeting begins with an exercise called Dwelling in the Word. After presbyters pray, someone reads a selected biblical passage. That’s followed by silence, after which each person discusses with another, among other things, what in the passage captured their imagination and what question they might have of a biblical scholar. Investing in the practice may take a little time from each presbytery meeting, but it’s well worth it, Goodrich said.

“We Presbyterians assume rightly that God is with us,” he said, “but we also assume our process keeps us in God’s purpose.”

Goodrich asked workshop attendees to name ways the Holy Spirit is currently nudging them. Among their responses: “Expect God to show up.” “Love without end.” “Being the light.” “God’s grace is sufficient.” “Well, finally!” “Enjoying the work.” “Humility.”

Goodrich recalled the account in Numbers 13, where a pair of Moses’ spies in Canaan, Joshua and Caleb, are outvoted by their fellow spies over whether to try to overcome the Canaanites, whose land flows with milk and honey.

“The two submitted and stayed with the group. Eventually they saw the revising of their motion,” he said with a chuckle, “and they moved into the Promised Land.”

“All too often,” Goodrich added, “the vision God has is greater than what we assess our own resources to be. I think we dumb down God’s vision because we want to make it manageable rather than dreaming big.”

“There is a city of people there with you, including that great cloud of witnesses that came before you,” Cintrón-Olivieri said near the workshop’s conclusion. “Go that extra mile to develop relationships.”

She then gave the class a bit of homework: Each of the moderators, she said, should write down three steps they hope to take toward growing as a moderator.

“When things get difficult,” she said, “we are here to do ministry together.”