Stated Clerk tells Greensboro congregation to get ready for change 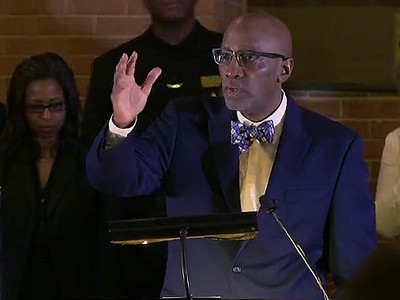 The Reverend Dr. J. Herbert Nelson, II, Stated Clerk of the General Assembly of the Presbyterian Church (U.S.A.), joined interfaith leaders in Greensboro, North Carolina, this weekend for the 40th anniversary of the Greensboro Massacre. The group gathered for worship and remembrance at the Shiloh Baptist Church.

On November 3, 1979, five people were killed and 10 others were wounded when members of the Ku Klux Klan and the American Nazi Party opened fire on participants in a “Death to the Klan” march in the city.

At the worship service on Sunday, a number of religious and government leaders spoke and the five that were killed were remembered. Nelson, who has served churches in North Carolina, was the keynote speaker with the sermon entitled “Paying Our Sin Bill in the 21st Century Church.”

Nelson told the crowd that the time is now for change, saying marginalization and exclusion of people are unacceptable practices. He referred to the shooting at the Charleston, South Carolina, church in June 2015, in which nine people of color were killed during a Bible study. Dylan Roof, who was 21 years old at the time, was later convicted of 33 federal hate crime and murder charges.

“Somewhere he was taught hatred and bigotry. Somehow or another, he learned the vile words of degradation for those who have struggled in this country for more than 400 years,” Nelson said. “The Dylan Roofs of this world are still being trained in North Carolina and across the country. They continue to carry the same hatred and bitterness that we have seen throughout the ages.”

Nelson said the commemoration is a reminder that the racial bigotry and indifference to others shows that the Klan is still a source of hatred and bigotry and is “accepting trainees” in the 21st century.

“The uniforms have changed and the ideology is now being espoused in high places. The uniform has changed, but somehow, the filter has not,” he said. “We are seeing it on full blast in our cities right here in the United States all over again. We saw it in Charlottesville and we will see it again in some period of time.”

Nelson told the crowd that if they are ready to do the work of faith, it won’t be easy.

“The work requires a burden for us to carry, it requires the kinds of things that we often find we don’t want to give up,” he said. “That is why Jesus used vivid examples of why he was moving on, with or without them. Calling them to faith, even though they had unrest and tragedy in their lives. There is an urgent call of the church today. The time is now; there is not enough time to think about it. Jesus is calling us now, no time to pack your bags.”

Nelson said the church needs to come “outside of its own institutional importance” and reclaim the liberating role in the larger context of communities, even at the risk of the life of the clergy and the church.

This is the challenge of 21st century Christianity, to see the church as a movement, a larger context of the community, a community that looks more like what God intends rather than what a city council, commission, or governor wants — and to know in the midst of that, there will be resistances because the money mill is still turning,” Nelson said.

The Stated Clerk concluded his remarks saying the 21st century church is under reconstruction.

“If we think we have all the answers, we are wrong,” he said. “We are dying of ourselves in order to gain more of Jesus. We don’t know where we are going, but we know one who does. God is doing something new and I don’t know what it is, but I can feel the newness in me. We can be the church that will turn around and tackle the forces of evil that dare to take people away from us.”