Home News Ministry updates, motions, and engagement make for a full day for the Committee on the Office of the General Assembly

Ministry updates, motions, and engagement make for a full day for the Committee on the Office of the General Assembly 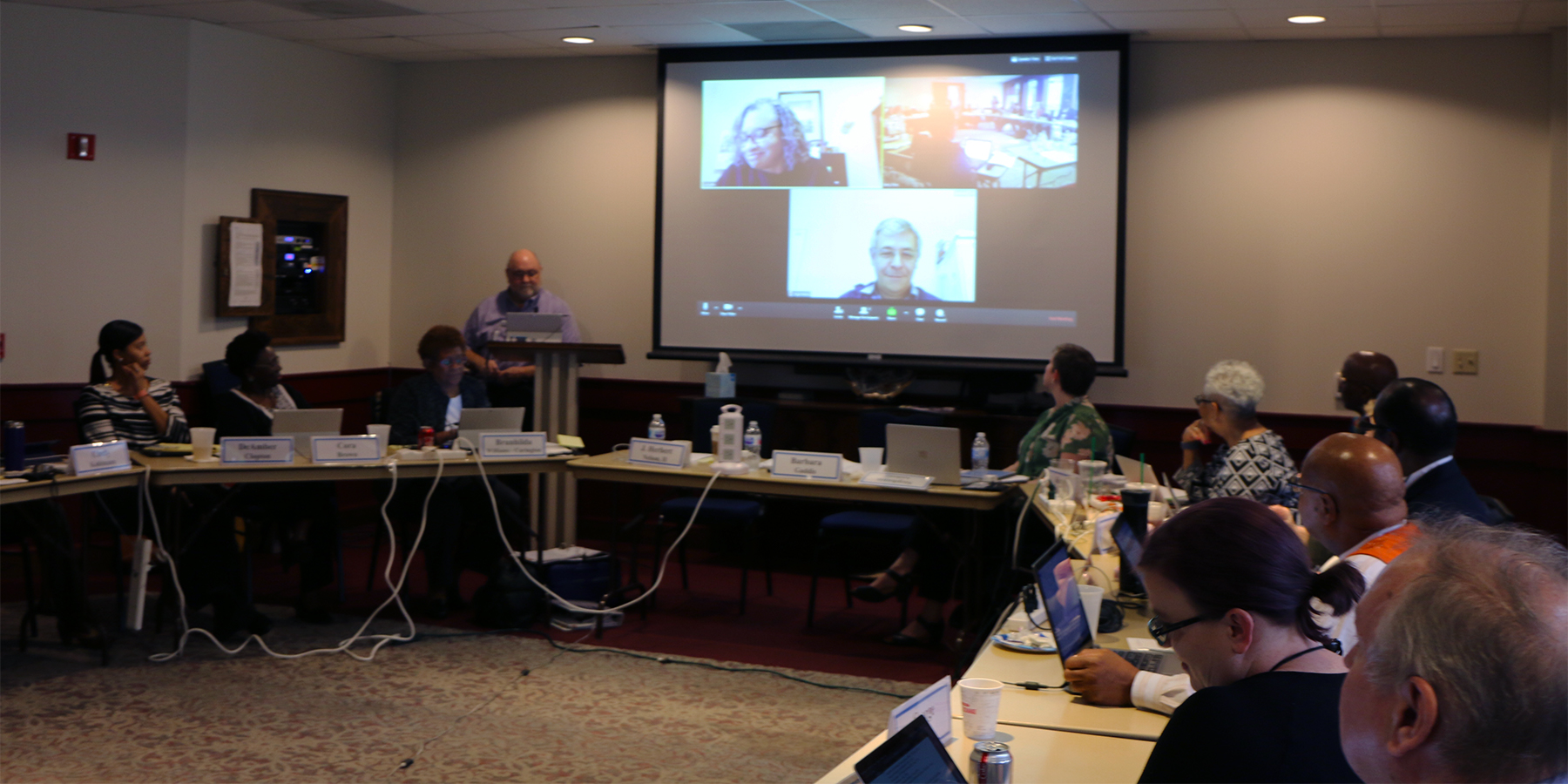 COGA took part in a video conference call with the co-moderators of the Moving Forward Implementation Commission on Tuesday in Houston. Photo by Rick Jones.

More than 126,000 miles traveled in the last two-and-a-half years. During the second day of meetings for the Committee on the Office of the General Assembly, the Reverend Dr. J. Herbert Nelson, II, Stated Clerk of the Presbyterian Church (U.S.A.), provided an update on his visits across the greater church. Nelson says he’s spent a great deal of time on the road, meeting with congregations, mid councils, and synods to gauge where the church is in the new century.

“We are in places where churches are trying to repair, some who are disjointed due to fall out in the denomination, struggling with issues we are facing. People are trying to figure out what to do and where to go,” he said. “But many churches have found creative ways to work and move forward and we have the responsibility to ensure leaders are equipped to do ministry.”

Nelson briefed COGA on his recent trip to Colombia and shared concerns about the challenges people are facing there and in other countries.

“The struggles in Venezuela over greed and oil are forcing people to move into Colombia to save their lives. But Colombia’s infrastructure makes it difficult to take an influx of people,” he said. “We’re seeing this happen all over. We’ve seen failure to do the work that needed to be done in Puerto Rico after the hurricane and we continue to see Haiti and other places demonized over and over again. This is deeply connected with our mission work in the church.”

Nelson says this is a significant time in the life of the church.

“When the church is engaged, there is growth. We have to learn again how to evangelize and call the name of Jesus Christ and not be ashamed and tell the truth about His love,” Nelson said.

The Reverend Cindy Kohlmann and Ruling Elder Vilmarie Cintrón-Olivieri, Co-Moderators of the 223rd General Assembly (2018), presented an overview of their seven months in office. The two reported they had visited three countries outside the U.S., participated in seven PC(USA) gatherings, ten presbyteries, and five synods during their time in office.

Kohlmann briefed COGA on her visit to both Kenya and Liberia as part of a visit with World Mission, while Cintrón-Olivieri discussed her recent visit to churches in Cuba and Florida.

COGA approved a motion to provide $5,000 to the Presbytery of Northern New England, where Kohlmann serves. The funds will be used to help the presbytery conduct business while Kohlmann travels as Co-Moderator.

“This has been a standing rule for some time to assist presbyteries when one of their staff members is serving the national church,” said Kerry Rice, Deputy Stated Clerk, OGA. “We recognize that the nature of a Moderator’s work is different than it used to be, and we want to be able to respond to that request.”

COGA also received updates on Big Tent and the 224th General Assembly (2020), both to be held in Baltimore. Tom Hay, Associate Stated Clerk and OGA’s Director of Assembly Operations, reported that the 223rd General Assembly (2018) came in nearly $300,000 under budget.

The committee received an update on the Hands and Feet initiative in Baltimore and conversed with members of the Moving Forward Commission. Other reports and updates included:

In her report to COGA, Beth Hessel, PHS Executive Director, said that giving to the historical society has improved by 66 percent over the past four years. She added that more than 850 patrons visited the offices in Philadelphia last year to conduct research.

Hessel added that PHS has also secured its first collections from Presbyterian churches in Puerto Rico and is focusing on efforts to recover historic work from African American congregations.

“We want to launch an oral history program and train local volunteers in the art of oral history,” she said. “This will allow us to go to regional areas and maximize the number of stories coming out of congregations.”

COGA concludes its three-day meeting today, with additional reports from staff as well as follow-up discussion on the committee’s role in the 21st century church.