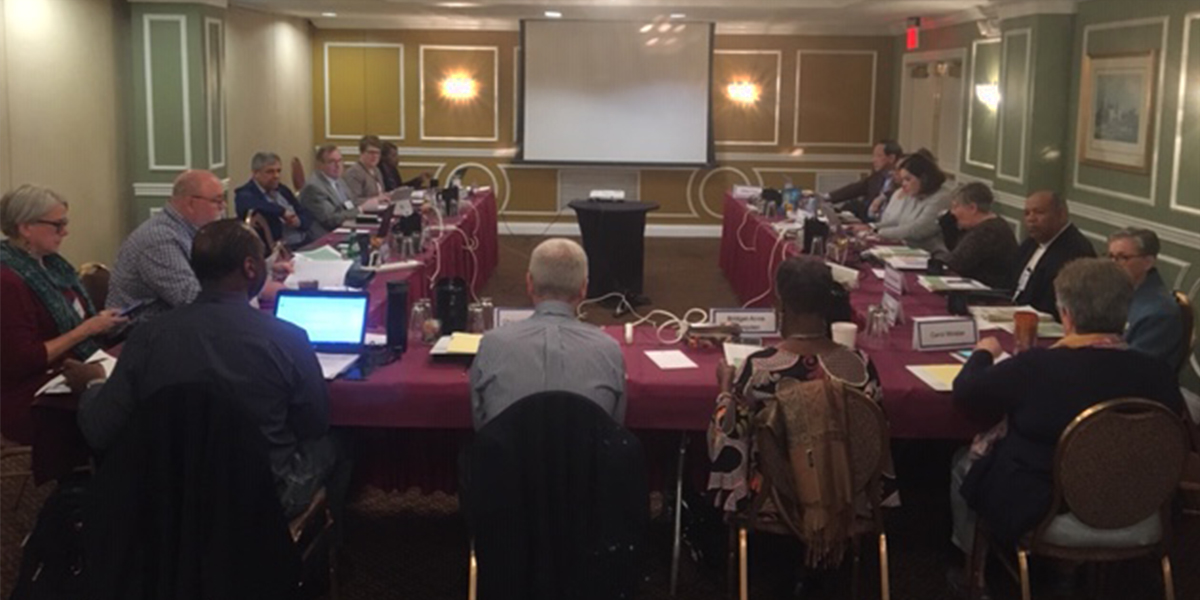 The PC(USA) A Corporation Board of Directors holds its spring meeting in Louisville. Photo by Rick Jones

The Presbyterian Church (U.S.A.) A Corporation (A Corp) board of directors is hoping to identify its final candidate for president early this summer. The board held its regular meeting Friday, saying it believes it will have a highly qualified pool of candidates from which to choose.

“The intent is to cast the net as wide as possible to get some qualified individuals,” said Bridget-Anne Hampden, board co-chair. “We are hoping that by end of April, we can narrow down the number of applicants and bring a slate back to the search committee.”

Hampden says the hope is to have three finalists in Louisville to interview with PC(USA) leadership and select the top candidate in June.

“It is an aggressive timeline, but I think it is doable. We want to keep a sense of urgency in light of losing Mike Miller,” she said. “We want to wrap this up because we have other searches that we have to begin.”

Miller served as acting chief financial officer for A Corp until his death from a heart attack on March 12.

The board also approved a Translation Task Force recommendation that the Administrative Services Group (ASG) begin the process of creating and filling a new position to manage global language services for the denomination. Currently the church provides Spanish and Korean translation and interpretation services. The new position would be responsible for managing and expanding the work.

Board member Sam Bonner, who also served on the Way Forward Commission, said this was an important part of the commission’s work.

“We supported the idea of being able to communicate around the world because our religious hopes and dreams were essential and until now, that process had been limited. The Moving Forward Commission is now working on this and I support this effort,” he said. “Translation is important to Hispanic, Korean, and every community. We want to be able to take that message around the world.”

Deborah Avery, a member of the Moving Forward Commission, appeared before the board to speak in favor of the proposal.

“This is about acknowledging the importance of diversity and wanting more than just inclusion. We want to receive the gift of language from other cultures as well,” she said. “Bringing in a manager allows them to be in the decision-making process of shaping this department.” 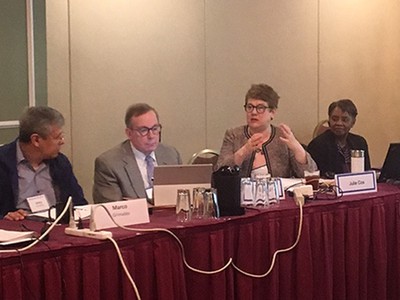 A Corp board member Julie Cox (second from right) discusses the need for a manager of global language services within PC(USA). —Photo by Rick Jones

The board approved a working business plan for the corporation, which had been in the works prior to Miller’s death.

“We talked with Mike about this. We asked him to conduct a survey and he took that to mean looking into the future, not the past,” said Carol Winkler, chair of the corporation’s finance, budget, and operations committee. “That’s how this business plan began, by looking at what different departments would need.”

Board members say it will provide a guide to future work.

“Our legal team picked up the process upon Mike’s death and we worked with managers and department heads to get their input. We weren’t able to get everyone’s feedback,” said Kerry Rice, who is currently serving in a temporary leadership position with ASG. “It is a working document and we will continue to refine it.”

The Reverend Dr. J. Herbert Nelson, II, Stated Clerk of the General Assembly of the PC(USA), shared his vision to utilize the denomination’s offices in downtown Louisville to expand ministry and be a proactive force in the Louisville area.

“We’ve been here for more than 30 years now and we are having good conversations around the hope that we will be a major player in the moral and ethical roles of this city,” he said. “The city needs a moral and ethical core with homelessness all around us and around the new development. There is a role for us.”

Nelson asked the board to form a committee that would explore the various ways the denomination’s office building can be used in ministry and community support.

“How can we use the empty space we have such as a former cafeteria? We could explore such options as a daycare for downtown workers or provide meeting spaces for companies near us such as Humana,” he said. “In the midst of all of the bustling activity downtown, we are missing opportunities to dream and vision what can happen in this space.”

Nelson said another option is to provide bed space to save on hotel costs for people coming to the PC(USA) from out of town.

The board asked Rice to lead the effort to form a committee to explore some of the Stated Clerk’s vision.

The Reverend Cindy Kohlmann, Co-Moderator of the 223rd General Assembly (2018), briefly addressed the board, thanking members for their vision and service.

“You bring imagination in the midst of contracts, budgets, and your love of the church,” she said. “While you provide attention to detail, we know this is about mission and ministry and lifting up and building up the body of Christ, while dealing with the technical issues and where the services come from.”

The Reverend Dr. Diane Moffett, Executive Director and president of the Presbyterian Mission Agency, briefly spoke to the board about her work and desire for evangelism.

“We hope to drill down to what it means to be faithful and relevant at this time. We are re-presenting Christ to the world,” she said. “We have to embody the presence of God. Our denomination is here, and it should make a difference here. We cannot afford to do precious little, we must turn outward to share the love of Jesus Christ in the public square.”

In other business, the board approved a 3 percent salary increase pool for ASG employees and heard from the Reverend Tim Cargal, manager of preparation for ministry with the Office of the General Assembly. Cargal presented plans for a new online leader education initiative that will be unveiled in June.

The A Corp board is scheduled to hold its next meeting July 18–19.