Presbyterian chaplains and a Co-Moderator host forum on veteran suicide

Group looks at ways to battle growing problem in the military 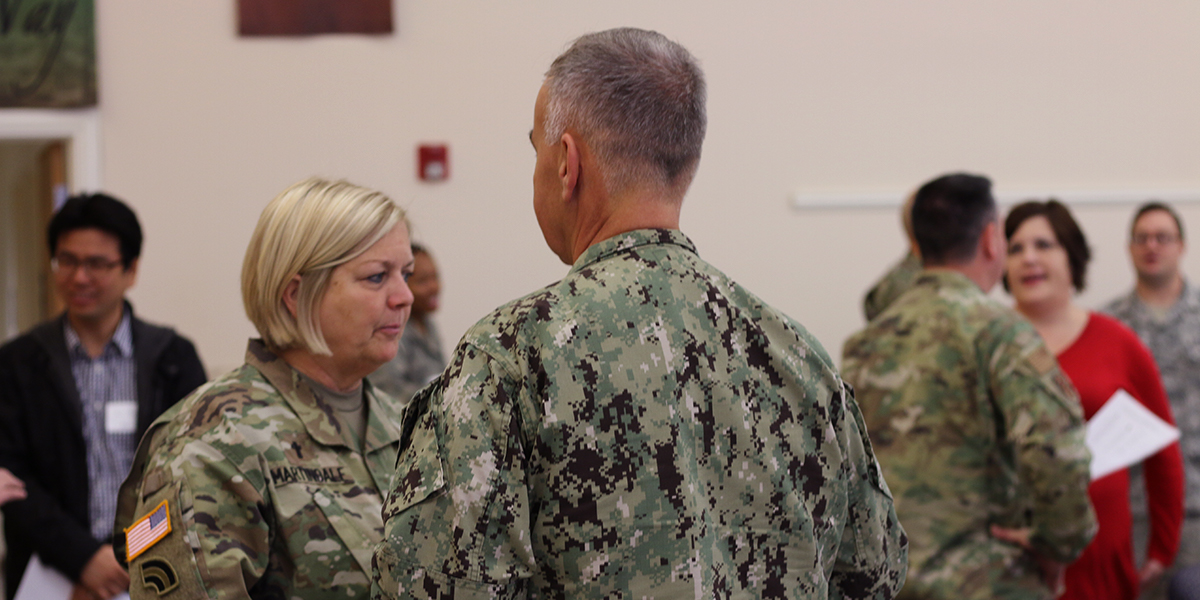 Chaplains, faith and military personnel interact during the forum in Fairfield. Photo by Rick Jones.

When Jose Guzman got out of the army in 1992, he seriously considered taking his own life. He was suffering from Post-Traumatic Stress Syndrome (PTSD). The pain and trauma of being in war drove him to drugs and alcohol and nearly cost him his marriage and ultimately his life. It would take 18 years before he got the help he needed from the Veterans Administration.

As many as 20 veterans take their own lives each day, according to the United States Department of Veterans Affairs, and the problem is getting worse. A group of faith leaders and chaplains gathered at the Rockville Presbyterian Fellowship in Fairfield, Calif., on Thursday to address the growing problem. They represented Presbyterian, Roman Catholic, United Church of Christ, and other denominations. The Air Force, Army, Navy, and Civil Air Patrol were among the branches of service represented.

The Reverend Cindy Kohlmann, Co-Moderator of the 223rd General Assembly (2018) of the Presbyterian Church (U.S.A.), moderated the forum.

“My father was career military and I was a naval officer for four years and in the chaplain candidate’s program while I was in the seminary, so this is something I was very interested in being a part of,” she said. “When veterans go through struggles and are unhappy, the chaplain is usually the first person they reach out to.”

Experts say the causes of suicide among military personnel vary from exposure to violence and war to spending lengthy times away from home and family. Combine those with injury and adjusting to civilian life, and thoughts of suicide are on the rise.

The forum was organized to provide faith leaders with the tools to identify problems and the counsel needed for troubled veterans. Lyman Smith, director of Presbyterian Federal Chaplaincies, opened the conversation by saying the faith community has an opportunity to make a difference in those who are hurting. 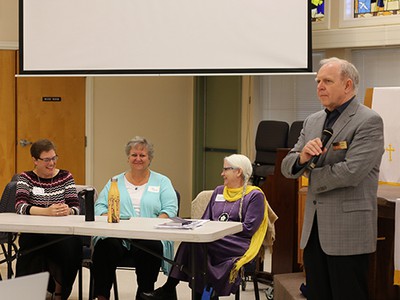 “About 17 of the 20 who take their lives each day have no significant contact with the Department of Veterans Affairs. Who’s going to have contact with them? Communities of faith,” he said. “As elders and members of congregations, that interaction is important as we learn to work together because we have a crisis.”

“This is a heavy conversation. It’s an important conversation. I don’t think I’d be out of line to say that all of us have been touched by suicide one way or another,” Kohlmann told the group. “Our hope is to build a foundation, so we will have new tools to help decrease that average daily number of suicides.”

Dee Cooper, interim executive presbyter of the Presbytery of Heartland in Kansas City, Mo., was one of the forum leaders. She says it’s important for faith leaders to help troubled veterans understand it’s OK to talk about things that are considered taboo.

“We need to help people step out of taboo. There has to be a comfort level where we can step into those places that people don’t talk about,” she said. “We have five emotions—anger, fear, sadness, sexual feelings, and joy. If feelings are not expressed, they locate in our body and don’t go away. Most people you work with have shut down those feelings. It’s key to help them understand what they are feeling instead of remaining in a numb kind of state.”

Cooper told the group that despite the counsel and support, some will still follow through and take their own life.

“In the midst of it, guilt is a special toxic gift that accompanies suicide. It’s a part of it. So many times, we as providers wrestle with guilt thinking we could have done more,” she said. “You may hold on to anger and fear. But, there’s a recognition that every person has a choice for every decision they make in their life. Every person makes a choice. We can’t be the hero all of the time.” 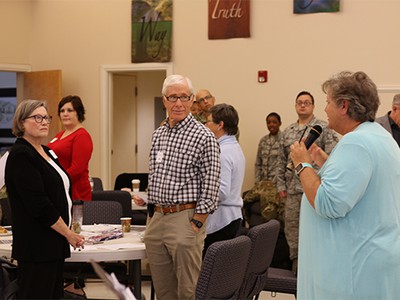 Annamae Taubeneck, a readjustment counseling therapist with the VA Center, shared some of the signs that veterans will exhibit when contemplating suicide.

“When you go to war, your sense of safety is shot and it’s difficult to feel safe after that,” she said. “You can’t trust people. In the military, you don’t go anywhere without a buddy. When you come back to the civilian world, you feel alone and vulnerable as if no one has your back.”

Taubeneck told the group that veterans die by suicide because they lose their self-purpose, feel alienated, or lack emotional support.

“Every generation of veterans return from the military to deal with so much,” she said. “They are focused on employment, housing, education, family support, and have no time to go to meetings during the day to deal with their struggles. Just because they have resources doesn’t mean they will connect with those resources.”

Taubeneck says that if people are in a crisis mode, they won’t make rational decisions.

“When you add a layer of PTSD and other diagnoses they may have, it compounds everything and even if people reach out to them, it’s difficult to connect,” she said. “I feel sad because many killed themselves that wanted help, but for one reason or another they chose to end their lives. The question is always why.”

Guzman now serves as a peer support specialist with the VA. His job is to reach out to other veterans who, like him, have isolated themselves from society and are contemplating ending their own lives.

“I have helped a few veterans that have contemplated suicide and I share my story and they identified the same fears and concerns I had,” he said. “It’s a nice feeling to be able to connect with them because we went through the same things, that feeling that no one understands what we go through and shun us because they don’t want to deal with someone who has PTSD.”

Kohlmann wrapped up the forum by urging faith leaders to reach out. “We need to change the conversation at the church level. If we don’t do that, the issue of veteran suicide will continue for generations.”