Local faith and government leaders to join in walk 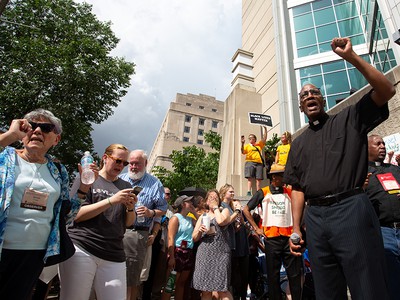 Building on the momentum of the past year, the Reverend Dr. J. Herbert Nelson, II, Stated Clerk of the General Assembly of the Presbyterian Church (U.S.A.), will lead a group through the streets of Louisville, Kentucky, next week, calling for an end to the cash bail system. Nelson has been actively raising awareness on the issue since a march in downtown St. Louis at the 223rd General Assembly (2018) last year.

The PC(USA) has been working closely with The Bail Project, a nonprofit organization that is committed to helping people get out of jail who cannot afford bail.

The Louisville march will be held on Wednesday, June 12, from the PC(USA) offices to the center of the city’s government and legal district, beginning at 1:00 p.m. EST. Several local faith and government leaders will also participate in the march and rally.

Donations are being accepted to help provide the cash for bail. Click here for more information.

In his monthly “Conversations with the Clerk,” Nelson discusses the campaign and the need for change.