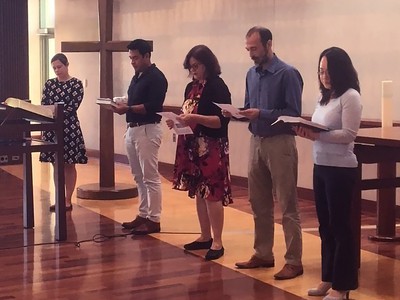 Staff and visitors at the offices of the Presbyterian Church (U.S.A.) in Louisville gathered for the weekly chapel service this week to lift up the courage and faith of immigrants coming to and living in the U.S. The service was led by the Office of the General Assembly’s Immigration Advocacy group as well as staff from other PC(USA) ministries and agencies.

The service was held as thousands of undocumented immigrants brace for potential raids this weekend by federal authorities. U.S. Immigration and Customs Enforcement agencies are expected to launch the raids on Sunday.

Recently, U.S. President Donald J. Trump said the raids would take place after the July 4th holiday if Congress could not come to terms on asylum laws and the number of migrants continuing to reach the U.S. border.

In her chapel remarks, Teresa Waggener, manager of Immigration Legal Resources in OGA, likened families and their supporters to the disciples as they journeyed to Emmaus in Luke 24:13–31. She said that many are “sad and scared” right now just as the disciples were after the death of Jesus.

DO YOU PLAN TO LIFT UP IMMIGRATION IN YOUR SERVICE THIS SUNDAY?

“For more than two years now, friends, family, and neighbors have been reporting to routine ICE appointments and being told that they need to come back with plane tickets to be deported,” she said. “It doesn’t matter how long they’ve been here, what they contribute to their community, the families that they have grown here, or how they will be treated in the nation to which they will be returned.”

Waggener says the closed cases of naturalized citizens are now being re-opened and questioned by a new fraud task force.

“Parents and children continue to be torn from one another in households during ICE enforcement actions and at our borders when they arrive seeking safety,” she said. “People are dying in the difficult and dangerous terrain of the borderlands, dying in the custody and care of U.S. law enforcement. It can be hard, sometimes, to see Jesus.”

Waggener says that the disciples could not recognize Jesus walking with them. She says that it was understandable but that it’s important for the church to stay focused on Jesus during this time.

“Do we really have to keep reminding people that everyone is owed basic human dignity, that we are all the children of God, that kids need soap and toothbrushes, and that family integrity is a basic human right?” asked Waggener. “It can become hard to see Jesus. But Jesus is right here with us, walking with us.”