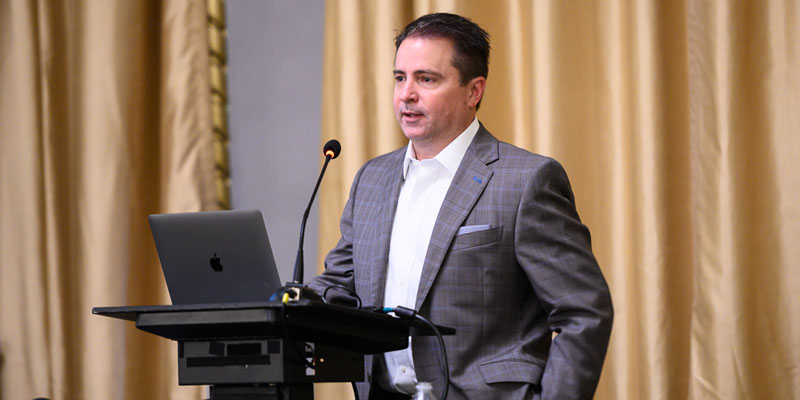 Dr. Robert P. Jones, the author of “The End of White Christian America,” spoke Friday morning during a Big Tent breakfast sponsored by the Presbyterian Foundation. Photo by Fred Tangeman

Religion is at the heart of America’s identity crisis, and Dr. Robert P. Jones has the research and the insight to explore why that’s so.

Jones, the author of the 2016 book “The End of White Christian America,” spoke during a Big Tent breakfast Friday sponsored by the Presbyterian Foundation. About 150 people attended.

There’s little dispute that the White Anglo-Saxon Protestant (WASP) dominance of the 1950s and early 1960s has dwindled significantly. As recently as 2004, 6 in 10 Americans were white and Christian; today that number is closer to 4 in 10. “That’s a lot of movement,” he said.

The segment of the U.S. population that identifies as non-white and Christian is now about 25 percent, he said, with another 25 percent saying they have no religious affiliation. More than 6 in 10 seniors are white and Christian; among young people, it’s closer to 2 in 10.

About 40 percent of adults in their 20s claim no religious affiliation. Just three decades ago, that number was closer to 1 in 10.

White evangelicals are now 15 percent of the population, down from 23 percent in 2006. Mainline Protestant affiliation is currently just below that number, at 13 percent.

Jones explained what he thinks is going on in the minds of white evangelical voters by applying their view of politics to the five stages of grief identified by Elisabeth Kubler-Ross: denial, anger, bargaining, depression and acceptance. Jones said white evangelicals find themselves somewhere between steps 2 and 3.

“With white evangelicals, there is this sense the country is changing, a sense of grief about losing the place of domination and prominence,” he said. That voting bloc, he said, has “struck an end-of-life bargain” with President Trump. “He doesn’t fit their bill, but they think he can turn back the clock,” Jones said, noting the word “again” in the slogan “Make America Great Again.”

When he was campaigning leading up to the November 2016 election, Trump, according to Jones, used to “lean into the mic and say, ‘Look folks, I’m your last chance. You will never see another candidate like me again.’ I think that was a fairly effective approach.”

White evangelical voters have determined that the end — electing a candidate who promises to turn back the clock and return them to prominence — “is so important that the means matters less,” Jones said. “I think there is this kind of desperation.”

Today, Republicans are about 70 percent white and Christian; for Democrats, that figure is about 30 percent. “If that drift continues, we will have one party that is white and Christian, and another party that’s everyone else. That’s a dangerous place for democracy,” Jones said. “It’s become quite personal. That may be no surprise to those of you who have had Facebook interactions.”

Ask Americans whether the country is changing for the better or for the worse, and “it’s a question that splits the country right down the middle,” Jones said.

Among those who say for the better: Democrats, people with no religious affiliation, Latino Catholics, African Americans, young people and white people with college degrees.

And among those who say for the worse: whites, white mainline Protestants over 65, white Catholics, Republicans and white Evangelicals without a college degree.

He concluded his talk by displaying a reimagined version of Norman Rockwell’s famous “Freedom from Want” illustration. In one version of Hank Willis Thomas and Emily Shur’s update, a table crowded with people of various ages and ethnicities awaits the turkey’s arrival. Dad’s wearing the apron, and he’s presenting the turkey.

Jones said he recommends white Christians “find their seats at the table — this time as guests, not as hosts.”