Home News Convocation for Communities of Color concludes its gathering

Convocation for Communities of Color concludes its gathering

Two hundred people talk about what it means to see red 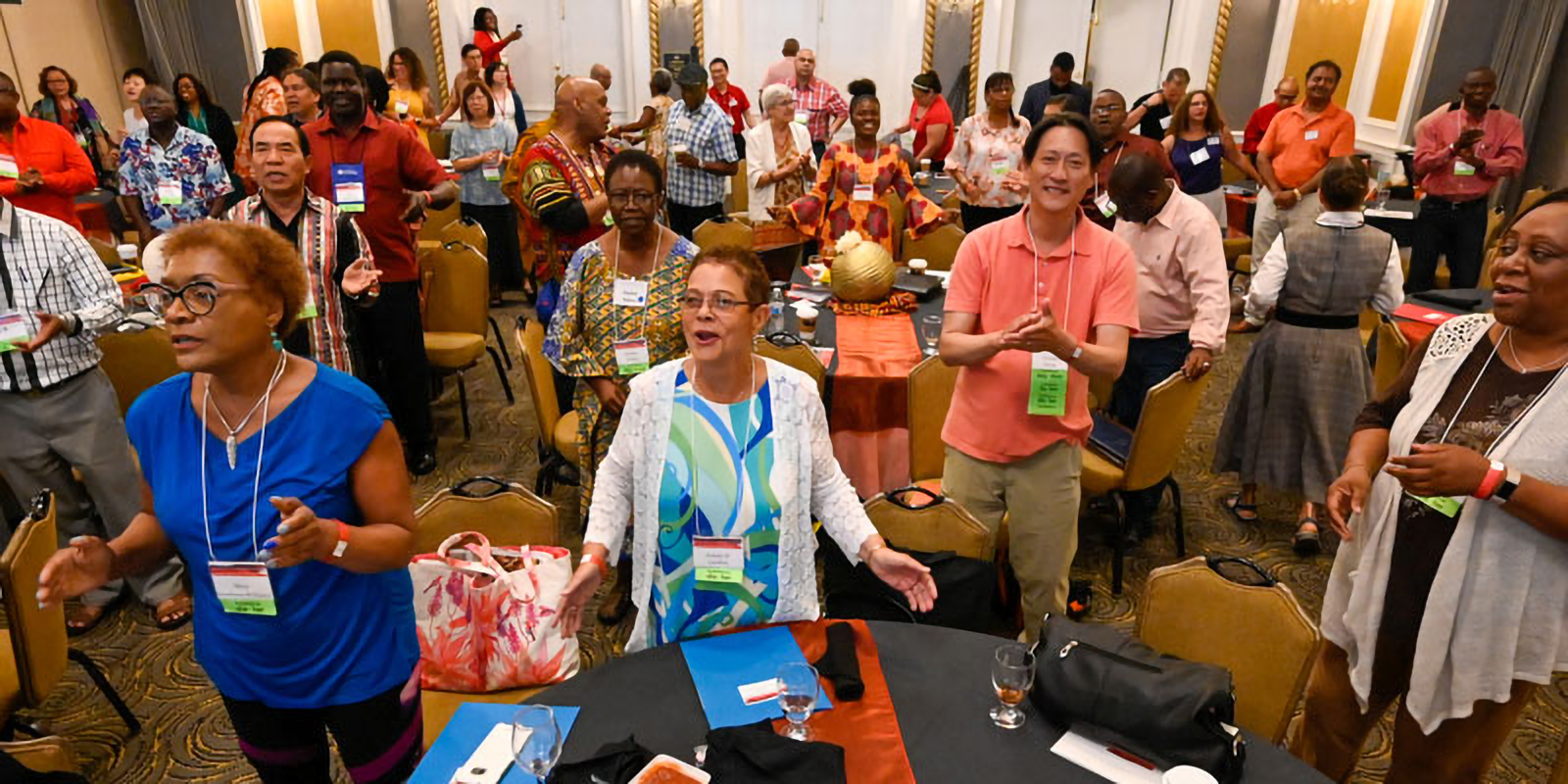 About 200 Presbyterians attended the Convocation for Communities of Color just before Big Tent officially opened Thursday. Photo by Rich Copley.

With the rhythmic beat of the drum and the melodious notes of the soprano saxophone, the Convocation for Communities of Color began with a jazz rendition of the hymn “I’m Going to Live so God Can Use Me.” Recording artist and convocation musicians Warren Cooper and Perpetual Praise filled the room with the sounds of familiar hymns performed with a jazz flair and in a way that lifted the spirits of all in the room, a room that truly looked like God’s beloved community with people of color of every hue.

Africans, African-Americans, Asians, Hispanics-Latino-(a), Koreans, those from the Middle East and Native Americans all gathered in the room for the kickoff for the two-day event held just before the kickoff of Big Tent.

The Rev. Shanea Leonard, associate for Gender and Racial Justice in the Racial Equity & Women’s Intercultural Ministries (RE&WIM) welcomed the 200 guests and expounded on the event theme, “Seeing Red: Movements to Wholeness.” 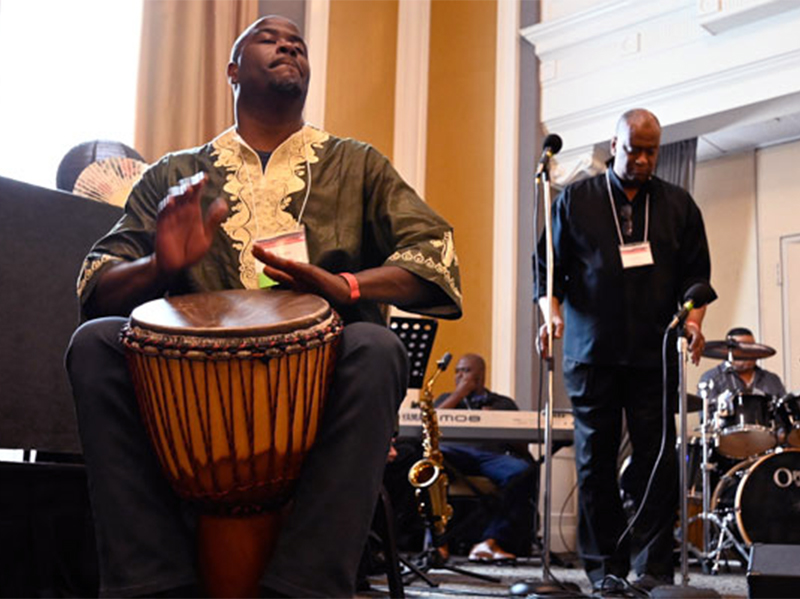 The Rev. Alonzo Johnson provided powerful drumming during the Convocation for Communities of Color. Photo by Rich Copley

“We chose red purposefully,” Leonard said. “Red is the color that makes us stop … makes us rest and reflect.” Seeing red heightens emotions, Leonard said, describing the symbolism of the color for various ethnicities: “Red for the Middle East triggers caution and can even provoke feelings of anger and rage. In the Latin-American flags, red represents unity and reminds us of the blood of those who heroically sacrificed their life for their country. For Koreans, red symbolizes positive and passionate energy and for the Chinese culture, it’s a symbol of happiness, luck, and auspiciousness.”

Leonard then pointed out that for African-Americans, red is the color of blood spilled by police bullets. For others it represents intimate partner violence and homo- and transphobic homicides. “Red is the color we see when a justice system continues to show itself unjust towards black and brown people. And red is the color of blood which was shed on the cross. When we say the theme of ‘Seeing Red,’ we want you to see all that red embodies for you as we journey through this time together.”

The Rev. Dr. Rhashell Hunter, director of RE&WIM, said, “We are here to deepen relationships, to gain emotional and intellectual support. The landscape of the Presbyterian Church (U.S.A.) is changing and has changed. Maybe the reason we need to work toward equipping our congregations, inspiring our pastors and elders and empowering our youth and young adults and connecting with one another is to envision this new landscape.” 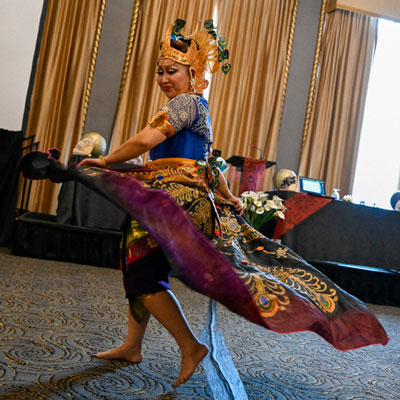 An Indonesian performer offered a dance during the Convocation for Communities of Color. Photo by Rich Copley.

“In doing so,” she said, “we have a greater chance of living out the biblical vision where the humanity of everyone is valued, where God’s love is spread to every race, class, gender and culture.”

The Rev Dr. J. Herbert Nelson, II, Stated Clerk of the PC(USA), told those gathered that “the Lord has called us into some places where people have felt abandoned and some have felt that God has abandoned them.”

In recent and future General Assemblies, God “has called us into places like St. Louis, where there are police killings of which Michael Brown is most remembered.” Others are “still being killed by police who are called to protect and serve. God sent us there. The decision to go there was made several years before we ever heard of Michael Brown. And, several years before that, the Lord called us to be in Baltimore for the General Assembly long before a sitting president would take the opportunity to say this is a ‘rat-infested city.’” 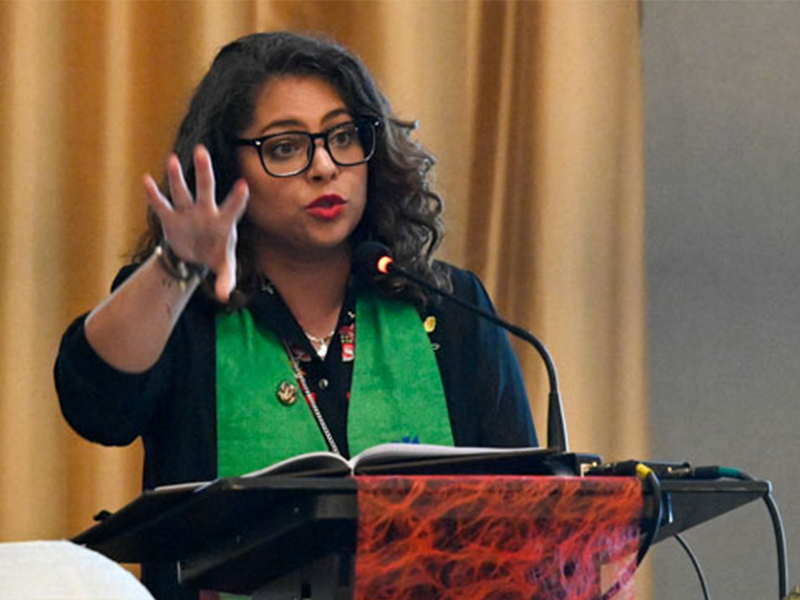 Ruling Elder Vilmarie Cintrón-Olivieri, co-moderator of the 223rd General Assembly, preached during the Convocation for Communities of Color. Photo by Rich Copley.

Opening worship was an intercultural celebration. Worshipers participated in a traditional ancestor acknowledgement and libations ritual. Elona Street-Stewart, executive of the Synod of Lakes and Prairies and a Delaware Nanticoke, formally opened the convocation by acknowledging the Indigenous peoples on whose land the meeting was held. The Indonesian Presbyterian Church shared a Peacock Angelo dance.

The Lord’s Prayer was first led in Arabic and was then prayed in unison in everyone’s own native tongue. Worshipers then took to their feet to join the musicians in an uplifting rendition of “Kumbaya” and a gospel arrangement of “O Happy Day,” made popular by recording artist Edwin Hawkins.

Co-moderator Vilmarie Cintrón-Olivieri, the event preacher and a PC(USA) ruling elder, began with a prayer and a reading from Luke 8:43-56 in Spanish, her native tongue.

“My family wanted more for the new generations: the ability to communicate in the language that would open up doors, and by achieving fluency that would shield us from being mocked or taken advantage of, bullied or marginalized for not speaking English,” she said. “For the sacrifices made and for the vision of a future that included the possibility of engaging in a more plural world, I am grateful to my family.”

“Speaking English enabled me to participate fully in my beloved PC(USA), becoming familiar with the denomination at large at a time when only those who spoke English could effectively serve as commissioners or advisory delegates to a General Assembly, for example,” she said. “And it has allowed me to serve in this eye-opening, life-giving and life-changing ministry as co-moderator with my sister Cindy (Kohlmann).”

In further keeping with the theme, individuals from different ethnicities shared how the U.S. and the PC(USA) have wounded their people. The plenary session reminded attendees of the importance of taking care of their physical, emotional and spiritual well-being. The evening ended in a heritage dinner and celebration — where the guests wore red attire.