DREAAM participants, parents and staff traveled from Champaign, Ill. to participate in Big Tent on August 2, 2019. Photo by Angela Stevens.

Fifty-two young people, staff and parents from Champaign, Ill., traveled to Baltimore to be a part of the Big Tent workshop Loving our Neighbors: Reviving our Witness to Young People by Supporting our Public Schools.

The individuals were there to represent the organization Driven to Reach Excellence & Academic Achievement for Males (DREAAM). DREAAM is a partner of the Presbyterian Church (U.S.A.)’s Educate a Child Initiative launched at the 2016 General Assembly.

The session began with a presentation from the DREAAM students.  Children gathered into their “huddle” to perform a highly energized good morning chant followed by their welcome chant and their tribe chant. The chants are daily rituals practiced by the student participants to build positive affirmations and collective responsibility and to get them excited about their day.

The students also recite five exhortations each day. They say dreamers are: respectful, leaders, work hard, use appropriate words and are positive brothers. Additionally, they say a prayer to remember the children separated from their parents at the border. 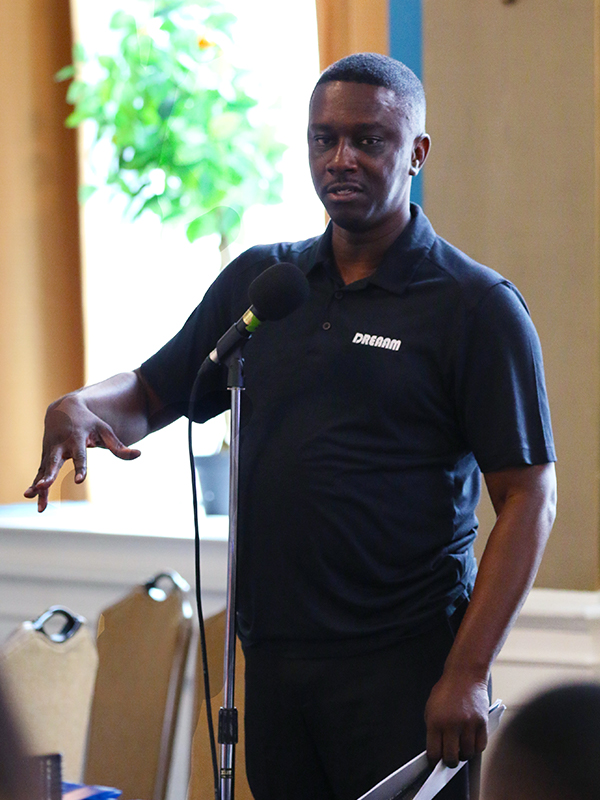 Tracy Dace, founder and executive director of DREAAM, a program of PC(U.S.A.)'s Educate a Child Initiative, discusses the program's mission to address the plight of African American boys. Photo by Angela Stevens.

Tracy Dace, founder and executive director of DREAAM, is a member of Frist Presbyterian Church of Champaign. He has worked in nonprofit organizations and served as an adjunct professor at Parkland Community College.

“God gave me a vision to address the plight of African American boys,” said Dace. “Frist Presbyterian heard my vision in 2015 and decided to support the vision.” Dace says the church has stood beside him and the program since the beginning.

“Churches have opened their doors and given us space to meet. First Pres has allowed us to use their van and supplied volunteers. But what is really exciting is to see the relationships established between the kids and the volunteers,” he said.

The DREAAM program adopts an early intervention model. They began working with children at age five and they remain in the program until age 24. “We use evidence-based practices from research to build the program components, but we also include the culture aspect related to our children,” he said. Dace says they also consider how trauma may play a role in the students’ lives.

DREAAM works to deter the school-to-prison pipeline. “We work to create a school to college pipeline, said Dace. The program is a year-round program that meets with participants at least five times a weak.

— Slightly under half of black male high school students graduate on time.

— Black men make up 4.3% of those enrolled in colleges and universities.

There are five key components to the DREAAM program. They include:

— Jumpstart to school. The program has a primary focus on kindergarten readiness and helps prevent summer learning loss. The program also helps develop soft skills like conflict resolution and communications.

— Dream Big! is the youth development part of the program.

— Motivating more males is all about mentoring the students.

At the conclusion of the workshop Dace provided concrete ways Presbyterian churches can support the efforts to get involved with educating and improving the education attainment for all children. Dace’s recommendations include such activities as:

— Direct service: Fill backpack with school supplies at the beginning of the year and provide extras for new students who move in during the school year.

— Consciousness-raising: Attend school board meetings to learn more about policies with the school system.

— Christian practices: At least quarterly, incorporate children into your congregation’s worship in ways other than the children’s sermon.

A toolkit is available with more information on how to get involved in local schools and the Educate a Child initiative.