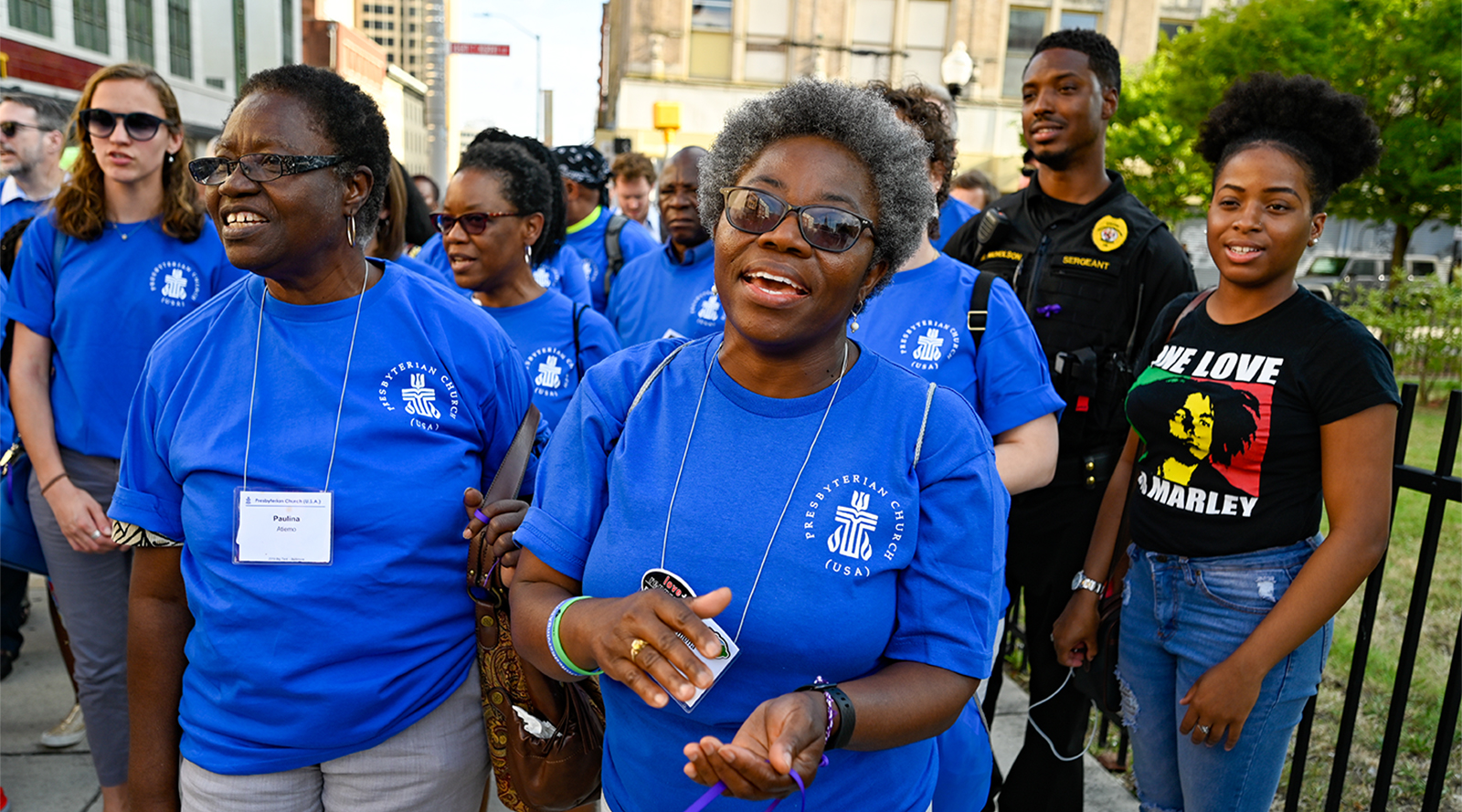 Nearly 200 walk in downtown Baltimore as part of the Baltimore Ceasefire Weekend to draw attention to gun violence. Photo by Rich Copley.

A sea of blue made its way along the sidewalks of downtown Baltimore on Friday evening. Approximately 200 Presbyterians attending Big Tent joined local advocates to speak out against gun violence. The group, dressed in blue Presbyterian Church (U.S.A.) T-shirts, marched as part of the quarterly Baltimore Ceasefire Weekend, a grassroots effort to draw attention to the growing problem.

Five local Presbyterian churches organized the walk, covering several areas where people have died in gun violence over the past few years. Participants stopped at three locations for prayer along the one-hour route. During the time, they would hear about a few of the individuals who had died.

“We need to be able to put a face on violence. These are not statistics or figures on a spreadsheet, these are husbands, fathers, and mothers with children,” said the Rev. Keith Paige, pastor of Cherry Hill Community Presbyterian Church. “These are people just like all of us, seeking a better life, who were cut down in the prime of theirs.”

Paige says actions like the ceasefire walk are encouraging residents to ask questions. 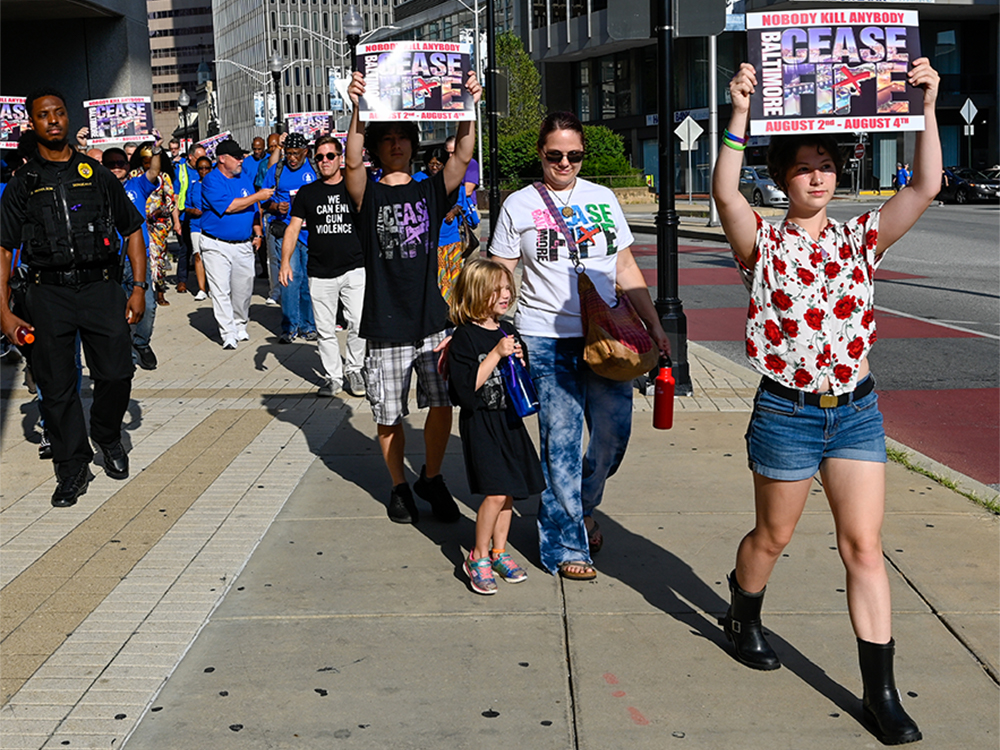 “They want to know how they can make a difference, and this is one way that a difference can be made,” he said. “It allows people to address, not just with words, but with their actions and their solidarity against violence and support of those who have been traumatized by it.”

Baltimore Ceasefire events began two years ago as a citywide call urging residents to avoid murders for a specific weekend. Various groups organize events to draw attention to the issue. When organizers realized that Big Tent would overlap with a ceasefire walk, plans were made to include attendees.

“I think this is a wonderful witness to our city with a mass of blue Presbyterian T-shirts walking together and it gives the sense that somebody else cares,” said the Rev. Deborah McEachran, pastor of Hunting Ridge Presbyterian Church. “I feel like everything we do creates awareness and people are tired and are not going to put up with this.” 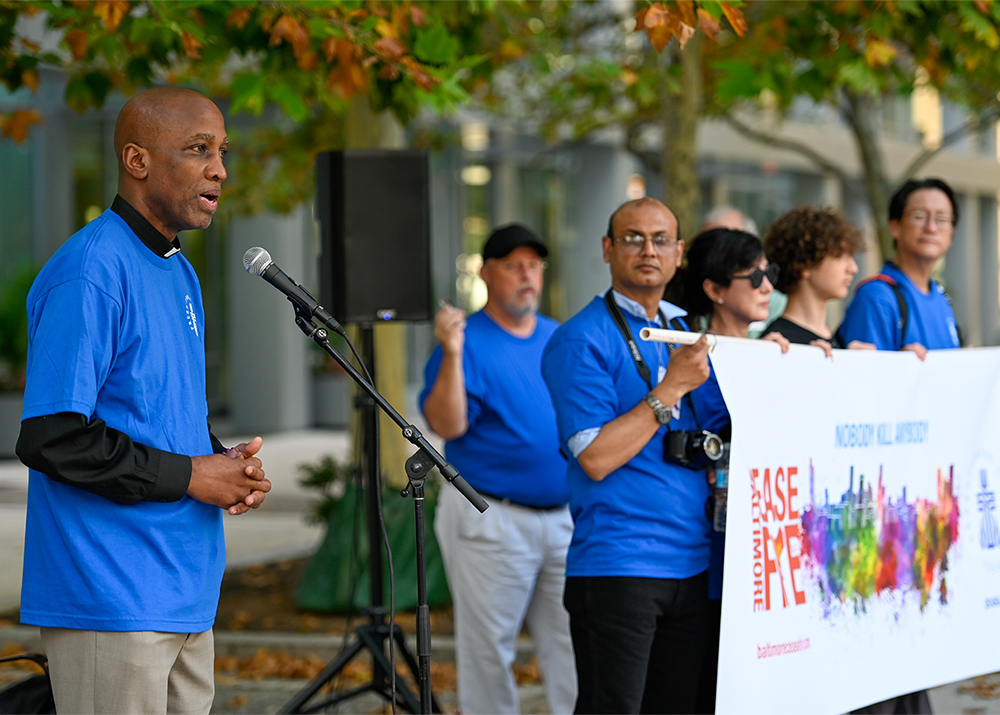 The Rev. Dr. J. Herbert Nelson, II, speaks at the conclusion of the Ceasefire Walk. Photo by Rich Copley.

A woman named Austin is a mother of four who heard about Baltimore Ceasefire and decided to get her family involved.

“Two of my children are Baltimore Ceasefire youth ambassadors. They participate in a lot of activities over the designated weekends and chose to be a part of the walks,” she said. “It’s extremely important to participate. Children know that this is something that they need to be involved with for the community and we need to support it by lifting it up anyway we can.”

Among those participating were Ruling Elder Vilmarie Cintrón-Olivieri and Rev. Cindy Kohlmann, the Co-Moderators of the 223rd General Assembly, as well as the Rev. Dr. J. Herbert Nelson, II, Stated Clerk of the General Assembly of the PC(USA), who addressed the crowd at the conclusion of the walk.

“Downtown Baltimore has become an urban ghetto. We came through parts of the city where people are struggling and living in despair,” he said.  “A few miles away, there are plush homes built in Baltimore County, where we find individuals in one of the richest places in the country, wealthy Americans. This is the dividing line between wealth and poverty.”

Both McEachran and Paige believe the two-year campaign is beginning to make headway. Paige says, “The violence has subsided, people are much more aware, not just of violence itself. There are concerned citizens who are willing to stand up and stand out against it.”