Home News Once you leave, can you go home?

Once you leave, can you go home? 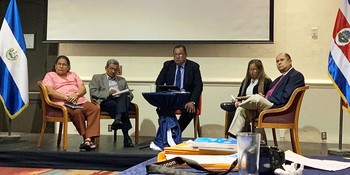 Organizations who have spent a great deal of time with migrants seeking entry into the U.S. will tell you that the driving force for these families is to get away from the violence, gangs and devastating poverty. The families also fear that a forced return to their homeland will result in their deaths.

The migration challenges were the impetus for a recent forum in El Salvador. A number of partners, including the Presbyterian Church (U.S.A.), met to discuss what is being done to address the issue.

“The idea was to bring together national government agencies, local government leaders, and international NGOs (non-governmental organizations) that are responding and highlight how they do that, and to collaborate with and call on people of faith to continue their response,” said Amanda Craft, manager of Immigration Advocacy for the Office of the General Assembly. “No one in El Salvador was looking to the U.S. for answers, but how to regionally address this migration context in faithful ways and how to do that in partnership with all stakeholders at the table. We, in the U.S., were asked to support and accompany that work.”

The 223rd General Assembly of the PC(USA) passed an overture from the Presbytery of the Pacific responding to an urgent plea from the Reformed Calvinist Church of El Salvador (IRCES) around the impact of returnees to the country from the United States. IRCES, a church partner of the PC(USA), sent the action first to the World Council of Reformed Churches. The Presbytery of the Pacific felt the need to ask the Presbyterian Church (U.S.A.) to be part of the solution. The resolution has allowed us to collaborate and support the work of immigration and refugee networks more effectively.

Craft says IRCES has been the leader and has worked with local churches in El Salvador to provide shelter for families who are forced to return.

“They’ve also been connected with religious, non-governmental, and governmental agencies, trying to address root causes of immigration and to address problems for those who are forced to return,” said Craft. “IRCES is a very small denomination of only five congregations. However, they can see the future, and coordinating efforts in El Salvador and with other international partners is important. It is necessary to hold the United States accountable for policies that could force half a million people to be returned in a year’s time.”

Craft says she was impressed with how the groups showed compassion and understanding for families when they are returned to their home countries.

“Generally, there is a strong hesitancy toward those returning because many believe that they must be violent criminals to be returned to El Salvador. They are vulnerable because they don’t have a family safety net,” said Craft. “Criminal networks see them as a potential group to take advantage of. There are a lot of ways they become a targeted group, so the country is still trying to figure out how to re-integrate them. How do we use their skill sets? How can they be certified so they can put their skills to work?” 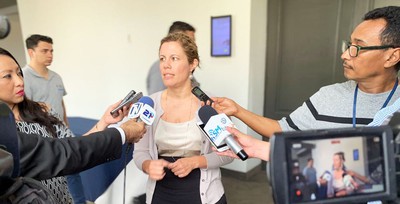 Amanda Craft, manager of Immigration Advocacy with the Office of the General Assembly, speaks with reporters at the forum. —Photo provided

Craft says mayors from a several Salvadoran cities also took part in the forum as the group looked for ways to work together instead of individually. They also believe the best way to address the migration issue with the U.S. is for Central American countries to be unified in their approach.

“If they allow the U.S. to look at them as very small countries and make agreements with them individually, it can have huge repercussions for the region and will never address the issues of why people are migrating and they will never have a voice at the table,” said Craft. “While I was in El Salvador, Guatemala agreed to be named a safe third world country. Anyone passing through Guatemala must apply for asylum, if they are seeking protection. An asylum-seeker's journey stops there instead of heading north to the United States, even though Guatemala will struggle to provide safety and security. This is what happens when they don’t go to the table together.”

Others in attendance echoed the sentiments.

“We are living and responding to a constructed crisis,” said Jorge Peraza Breedy, with the International Organization for Migration (IOM), Chief of Mission El Salvador, Guatemala and Honduras.

“It is true, migrants are the protagonists of the story,” said Father Alejandro Solalinde, Hermanos en el Camino de Mexico. “However, we are all part of the migrant. Their story is our story.”

“Our work will be to encourage U.S. residents to engage members of Congress on this issue and think about how and what foreign monies are sent to Central America,” said Craft. “Is the U.S. working on issues of corruption? Are we being partners that are addressing why people decide to migrate and are we working on how people in the U.S. with limited status have access to permanent residency?”

Craft says the PC(USA) was the only U.S. partner attending the forum. Other historic church partners in El Salvador also participated.

For more information about how the Office of Immigration Issues is working to improve immigrant rights, click here.

Presbyterian World Mission is supporting several ministries with IRCES, including placing a mission co-worker in El Salvador to work on peacemaking and migration issues. They are collaborating on a program from peacemaking initiatives in local schools. Funds to support this work can be directed to this account and earmarked for El Salvador -https://www.presbyterianmission.org/donate/E864600/.

Presbyterian Disaster Assistance has provided funding for IRCES’s work with returned migrants. You can learn about this work at - https://www.presbyterianmission.org/pda-blog/2019/05/20/rebirth-in-el-salvador/.