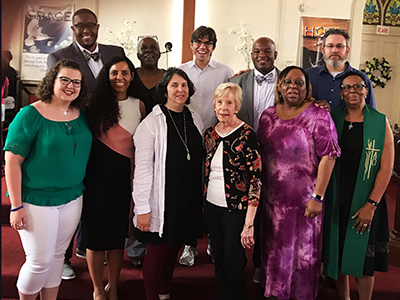 Members of the Vision 2020 Team worshipped recently with Grace Hope Presbyterian Church in Louisville, Kentucky. The pastor, the Reverend Angela Johnson, is at right, first row.

Sometimes you have to step back and listen for God’s voice. Members of the Vision 2020 Team found that out recently during a visit to Louisville. The group held its second face-to-face meeting of the year to work on the proposed guiding statement to be presented at the 224th General Assembly (2020) of the Presbyterian Church (U.S.A.) next summer.

The three-day meeting included time for Sunday worship, and, for this visit, the group chose to join worshippers at Grace Hope Presbyterian Church in Louisville’s Smoketown neighborhood, a mile-and-a-half southeast of downtown. The historically black community is bounded by interstate and CSX railroad tracks. The community got its name from the large number of smoke-producing kilns during the early days of brick-making.

“The GPS of the Lyft driver couldn’t even find the church. The GPS indicated that the church was blocks away from the actual location,” said the Reverend Jerrod Lowry, general presbyter and stated clerk for the Presbytery of Coastal Carolina. “As we passed the church, one of the team members said, ‘wait, that church sign said, “Welcome 2020 vision team.” I think that’s our church.’ It was not on the radar.”

Despite its absence on GPS, committee members say the church was alive and welcoming.

"Grace Hope Presbyterian Church is like many of the churches that I grew up in, churches that love deeply and broadly, churches that don’t necessarily care about worship schedules or following the bulletin, but rather knowing the importance of gathering together, or seeing one another, or being in community,” said Joshua Narcisse, a graduate of Yale Divinity School. “It felt like home. And while sitting in those storied pews, as I was led in worship by an elder who reminded me of the older women who taught me in Sunday school, I heard the words of the guiding statement and was reminded that it will live beyond the conference rooms where it was first born.”

Adaptions of the guiding statement were printed in the church bulletin, and that came as a big surprise to the group. 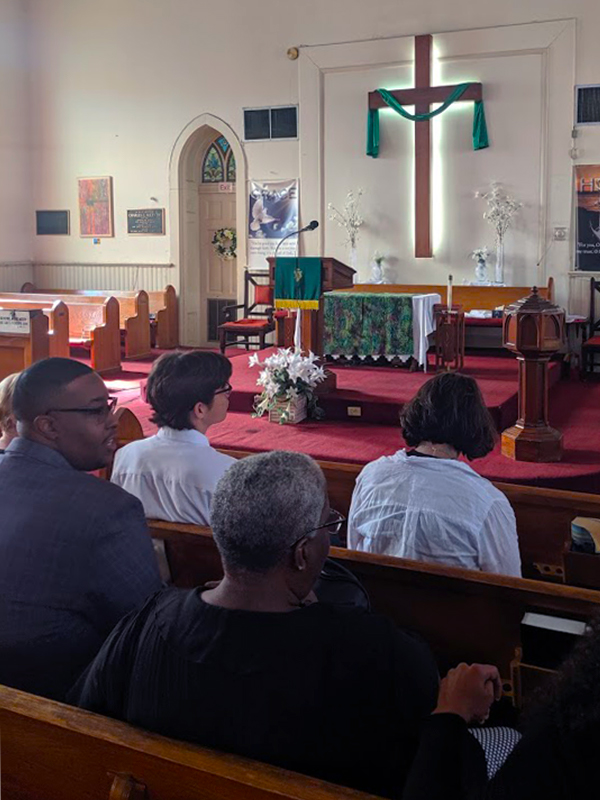 “The Call to Confession and the Assurance of Pardon had been adapted from the guiding statement. To use it in community as part of worship was a gift; we didn’t tell the church to do this, we didn’t give the specific language of the Call to Confession nor of the Assurance of Pardon and yet, it was there—what we had talked about as a group; the guiding statement being able to be used in different ways—including as part of liturgy & worship,” said the Reverend Sabrina Slater, Vision 2020 co-moderator. “We, as the 2020 Vision Team, trust and believe this, but as those who have been part of the team, we don't always get surprised—but here we did! It was the church living into the guiding statement in a way that fit their context, and in a way that also blessed us! The guiding statement is useful in worship. Praise God! It was this grace of encouragement as we continue as a team to be faithful to the invitation of the denomination to offer a guiding statement and do so with deliberate speed.”

The history of the 121-year-old church was on full display as the team was greeted by the liturgist with “We are alive.”

“It was evident by the music of a seven-person choir that bounced and made it impossible for me to sit while singing. It was evident by the length of time it took us to greet this congregation of roughly sixty. We joined a procession that marched around the sanctuary. Only once or twice did I just shake a hand and hear ‘peace be with you’” said Lowry. “Instead we were warmly greeted by those that wanted to hear about our lives and check in with each other. This would lengthen the service, but no one cared. Even the welcome of the children during ‘Time with the Children’ took a great deal of time as each shared their names and heard the congregation welcome them with affirmations of ‘we love you.’”

During worship, the Reverend Karen Sapio, pastor of Claremont Presbyterian Church in Claremont, California, said she was drawn to the picture of William Henry Sheppard, one of the earliest known African American missionaries in the Presbyterian church.

“In previous reading I had done on praying with icons, one of the instructions is always to look at the icon’s eyes. Where is its gaze drawing your attention? What is it asking you to see? I felt as though the picture of William Sheppard was functioning in this way—fixing us with a piercing gaze; asking us to consider his life, his faith, all the ways in which he was prayerful, courageous, united, serving, and alive through Christ and through the church,” she said. “I felt that his gaze would see through any half-hearted attempts by the church to live into this vision without reckoning with institutional racism in the church, our country, and our own hearts.”

The Vision 2020 team said the service and the inclusion of parts of the guiding statement provided the charge it needed to complete its work in Louisville.

Last year, the Vision Team created a guiding statement “God Calls the Presbyterian Church (U.S.A.) to be Prayerful, Courageous, United, Serving, Alive.” The first letter of each word spells out the PC(USA) acronym. Under each word is an explanation as to what it means.

The team was created by the 222nd General Assembly (2016). It has spent the last few months marketing the statement via social media, video, and at PC(USA) events such as Triennium and Big Tent. The team also launched a competition for people to write new hymns in support of the guiding statement.