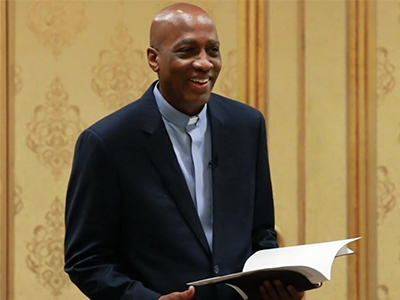 Nelson was the Sunday morning speaker at the convention in Las Vegas.

“It’s good to be among people who at least understand what I say today,” joked Nelson. “It can be a tense job and one we labor over in so many ways. I want to challenge us on how we might re-think how we do this work and live in the reality of our own faith as we walk through the legal procedures.”

Nelson read from the book of James, chapter one, focusing on Scripture about being quick to listen, slow to anger.

“When I read the Scripture and when I think about faith and religion, it’s all about trying to make us better, to live into something far greater than ourselves and to live for something that is always pulling us to become better,” he said. “I’m convinced that’s similar to what this association is about, helping us to become better and giving us some order, providing some sense of how we ought to move in a way that respects one another in opinions that are different from our own.”

The NAP works to educate leaders in effective meeting management through parliamentary procedure. Last year, the Office of the General Assembly entered into a partnership with the organization to look for ways to improve the church’s parliamentary processes.

Nelson said one reason he believes he was elected Stated Clerk was the need for institutional transition and change.

“God gives us life, strength, and health, yet we are called to give that same sense of grace, love, and order in our own deliberations to others. Our role is not to rule as parliamentarians, it is to lead people into a new way, to model a new way of getting things done,” he said. “Parliamentary procedure is not outside the bounds of what God is trying to do in the midst of us every day. God is trying to bring order to our lives in the midst of disorder.”

Nelson concluded by telling attendees that leaders must be willing to work with people, and how the church deals with people can change the tone of a meeting.

“Embrace those who don’t know the rules. We are the ones that will set the tone for what it means to be human and gifted by the Almighty to have the opportunities that we have to come together,” he said. “We make the decisions about the future of organizations that often work to make important decisions in people’s lives.”