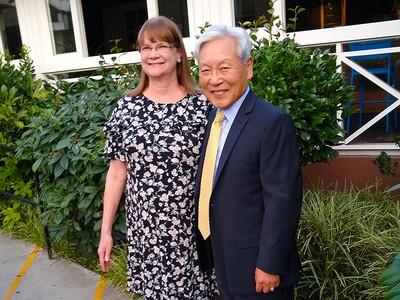 Sandra Hedrick and Moon Lee are running as Co-Moderators of the 224th General Assembly. —Photo provided.

The first candidates have officially announced plans to seek election as Co-Moderators of the 224th General Assembly (2020) of the Presbyterian Church (U.S.A.). Moon Lee, a ruling elder from the Presbytery of the Northwest Coast, and Alexandra “Sandra” Hedrick, a teaching elder and pastor from the Presbytery of St. Augustine, officially notified the Office of the General Assembly of their intentions to run as a team. They are the first to seek election for the upcoming assembly.

For the past 38 years, Lee has served as a ruling elder in congregations in three presbyteries: New York City, Eastern Korean-American and Northwest Coast. He has served as presbytery moderator, stated clerk, chairperson/moderator of the committee on ministry, permanent judicial commission, mission council and other positions.

“Growing up, I thought of no other career option but ministry. I began to appreciate God’s love when confirmed at the age of 13, and faithfully followed the routine of intensive Bible study, prayer, and sharing my rudimentary understanding of God’s grace with others,” said Lee. “I never missed a Sunday worship service.”

Hedrick has served as stated clerk at her presbytery and is pastor of the Kirkwood Presbyterian Church in Jacksonville, Florida. Prior to her ministry, she spent several years practicing law.

“My best gifts would be praying and presence, loving, listening, and encouraging — kind of like a pastor or presbytery leader does. I believe my combination of experiences is very broad and probably helpful,” said Hedrick. “I’m a pastor, served as clerk for seven years, and ruling elder, I’ve been a confused person in the pew, former lawyer, focused on mediation for a lot of those years, and taught law school. I’ve taught Sunday school and yoga.”

Hedrick says she and her husband met in law school. She was a Lutheran at the time, and he was a Methodist.

“When we got pregnant the first time, we decided to start going back to church,” said Hedrick. “We started attending churches and the Presbyterian church down the street from us was home from the beginning.”

The Co-Moderator model was first initiated by Denise Anderson and Jan Edmiston, who served for the 222nd General Assembly (2016) of the PC(USA). Current Co-Moderators Vilmarie Cintrón-Olivieri and Cindy Kohlmann have continued that approach to the role.

Lee says both he and Hedrick have talked and prayed about the decision to seek the office this year. He believes one of the best things they can do, if elected, is to listen to what the church is saying.

“The Bible teaches us to encourage one another to love and perform good deeds as well as listen,” said Lee. “We are so used to teaching, but listening is the first step of learning and we can learn more from each other.”

Hedrick says she draws inspiration by working in justice and reconciliation issues and believes that will be important as the church moves forward.

“We have to become more innovative, inclusive, flexible, collaborative. I follow Presbyterian news and notice a lot of stories about innovation, collaboration between churches, new worshiping communities, and even things I never thought of,” said Hedrick. “I’m totally convinced we have to go down the innovative path and I think the spirit will take us down that path. Things won’t look like they do. We would still have one heart and soul, but there are different and new combinations, collaborations, and forms.”

Lee believes it is important to nurture the next generation of church leaders, saying that in order to do a better job of engaging young people, today’s leaders need to understand them. He adds that love is what has inspired him to seek the office of Co-Moderator.

“I’ve thought about it a lot and I would say the love for God and love for God’s people and the church is my motivation for seeking the call as Co-Moderator. I have been privileged to serve the church in many different capacities for 38 years. I also considered it as a call from God,” said Lee. “Each call has provided me with a deeper understanding of God’s people.”

The election of the new Moderator/Co-Moderators will take place on Saturday evening, June 20, the first full day of the assembly in Baltimore.