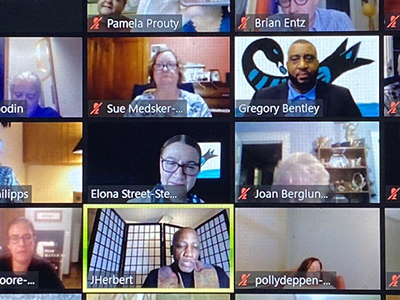 The Reverend Dr. J. Herbert Nelson, II, led the commissioning of Ruling Elder Elona Street-Stewart and the Reverend Gregory Bentley as Co-Moderators during a service with the Synod of Lakes and Prairies. Photo by Rick Jones.

The Co-Moderators of the 224th General Assembly (2020) of the Presbyterian Church (U.S.A.) were officially commissioned Monday night during the fall assembly meeting of the Synod of Lakes and Prairies. The commissioning came at the conclusion of the two-day meeting.

Ruling Elder Elona Street-Stewart, who is the synod executive of the Synod of Lakes and Prairies, and the Reverend Gregory Bentley, pastor of Fellowship Presbyterian Church in Huntsville, Alabama, were commissioned, as they were elected, in an online ceremony. The Reverend Dr. J. Herbert Nelson, II, Stated Clerk of the General Assembly of the PC(USA), spoke at the service.

“You are not called by yourselves but called by the God of great wisdom and power. It is a service that reminds us to give over our full selves to the Almighty,” Nelson said. “The work you have been called to do is special work, calling others and reminding them as you travel and write that they have the responsibility to live for Jesus Christ.”

Nelson said the Co-Moderators come at a particular time of transformative change in the PC(USA).

“We are in a period of so many uncertainties, while reshaping the church of Jesus Christ. In some instances, we are tearing it down and building it back up again,” he said. “We are at a time of struggling to what it means to be church at this particular age and what it means to build the church in a time of pandemic and denominational fallouts.”

Nelson says it is only through Jesus Christ that the church can see victory.

“We give thanks for your uniqueness and recognition as representatives of African American and Native American congregations,” he said. “I’ve never served as a Co-Moderator or Moderator, but I have served the Lord and I want to remind you those words are true: Welcome to the toughest job you will ever love.”

Street-Stewart and Bentley received 304 votes in a first-ballot election at the 224th General Assembly (2020) in June. Aside from moderating the online assembly at the Presbyterian Center in Louisville, the two have conducted their official duties as Co-Moderators in livestreaming sessions and on Zoom calls.

Both hope that 2021 will see a COVID-19 vaccine and an eventual ease in travel restrictions to allow them to meet with churches and presbyteries in person.