Home News Even during a pandemic, God will provide plenty of ‘what is it?’

Even during a pandemic, God will provide plenty of ‘what is it?’ 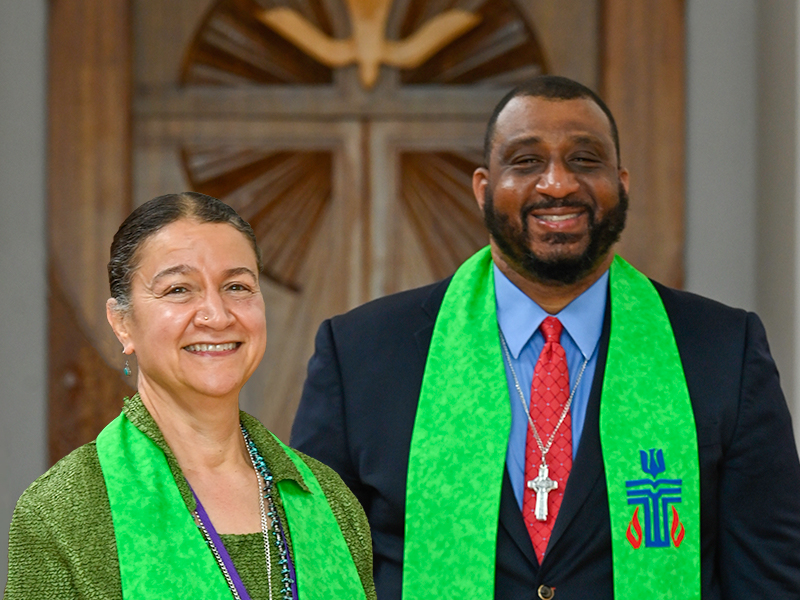 The same God who in the Book of Exodus “turned the Red Sea into an interstate” for the Hebrew people and later fed them six mornings each week with something the people named “what is it?” (manna) will also, according to the Rev. Greg Bentley, “give us some ‘what is it?’ to get us through” the current pandemic.

Bentley, who along with Ruling Elder Elona Street-Stewart is Co-Moderator of the 224th General Assembly (2020), preached Thursday during the opening day of the three-day Moderators’ Conference, being held online and attended by nearly 200 moderators of presbyteries and synods from around the country.

The conference continues Friday with talks about holding purposeful meetings during the pandemic and tips on parliamentary procedure. It concludes Saturday with talks including “Community Engagement in Times of Unrest,” “Conflict and the Constitution,” and “The Moderator as Spiritual Leader (Pandemic Edition)” and closing worship led by the Co-Moderators.

In much the same way God’s people accused Moses of “malicious intent” during the Exodus, “people will accuse you, moderators, of incompetence and malicious intent,” Bentley said. “They’ll say, ‘You are not working in our best interest. You are leading us to harm.’ That is anxiety speaking. We have to have the rootedness to look up to God … God reminded Moses — and God will remind you — that ‘I’ve got your back. I didn’t bring you this far to leave you.’”

After his sermon, Bentley said he was “elephant excited, dinosaur delighted and honeymoon happy” to introduce the Rev. Dr. Diane Moffett, president and executive director of the Presbyterian Mission Agency, who offered moderators an update on the PC(USA)’s  Matthew 25 invitation.

Those in attendance broke into small groups to discuss the Matthew 25 invitation. When they returned, a handful said they knew of some pastors in their presbytery or synod who’d been met with resistance and even anger from church members, especially for advocating that the congregation pursue dismantling structural racism, one of the three Matthew 25 focus areas.

Those concerns drew responses from both Bentley and Moffett.

“Matthew 25 isn’t about how individuals feel,” Bentley said. “It’s about dismantling structural racism and how systems function to create misery and disadvantage, the haves and have-nots. That’s what the vision is aimed at. We are more interested in dismantling structures that produce inequitable outcomes.”

Moffett said she was “blessed to hear from” the moderators. She called the discussion about race and poverty “an uncomfortable place for some people.”

“We can do better,” she said. In Matthew’s gospel, “many people were offended by what Jesus had to say, but he was speaking the truth.”

“We have been called to lift up our voice and preach,” she said. “If we don’t see ourselves as anointed, if we aren’t willing to pick up our cross and suffer some, then we will always be comfortable and we won’t want to risk — and we’ll bear the consequences, including being wholly irrelevant.”

The church “has always been countercultural and counter intuitive,” she said. “We have got to clarify what it means to be a prophetic place, and we can’t do it alone. We are always changing, though the Word remains the same.”

“God has gone before us and given us direction for such a time as this,” Moffett said, pointing to direction from both the 222nd and 223rd General Assemblies that the PC(USA) will be a Matthew 25 church. “The Holy Spirit prepared us for this, and now we need to be prepared to take up our cross and follow Jesus.”

Earlier, the Rev. Dr. J. Herbert Nelson, II, Stated Clerk of the General Assembly of the Presbyterian Church (U.S.A.), told the moderators their work is “not going to be easy, but it can be enjoyable.”

A power of moderators, he said, is “the opportunity to make sure things go smoothly.”

“Lead us through these turbulent times,” he asked them. “Do it with an unrestrained vigor and a presence because you know the One who can make everything better.”

During the last two hours of their time together Thursday, moderators heard from the Rev. Jihyun Oh, director of Mid Council Ministries, about the Intercultural Development Inventory, which the Office of the General Assembly uses to promote intercultural growth. Nearly 180 of the participants were given the assessment in the lead-up to the Moderators’ Conference.

People who take the inventory are assigned a score along a continuum ranging from a monocultural mindset to an intercultural mindset. The inventory includes five orientations: denial, polarization, minimalization, acceptance and adaptation.

The core characteristics of that orientation, Oh said, include highlighting the commonalities of all human beings, recognizing the essential humanity of every person and assuming that people from other cultures are basically like us.

The behavior or affect most commonly demonstrated by people in this orientation, she said, is to treat each person as an individual. There is an interest in people’s differences, she said, but a limited ability to adapt to cultural practices.

A strength of minimalization, Oh said, quoting from the inventory, is that “if you can rely on commonalities to build bridges between cultures, this can be a successful strategy.” The developmental opportunity for those in this orientation is to dig deeper into your own cultural identity to develop more self-awareness.

The inventory “is not a judgment,” she said, “but an encouragement to keep growing in intercultural competence.”