One-day meeting focuses on “Wholeness in Times of Crises” 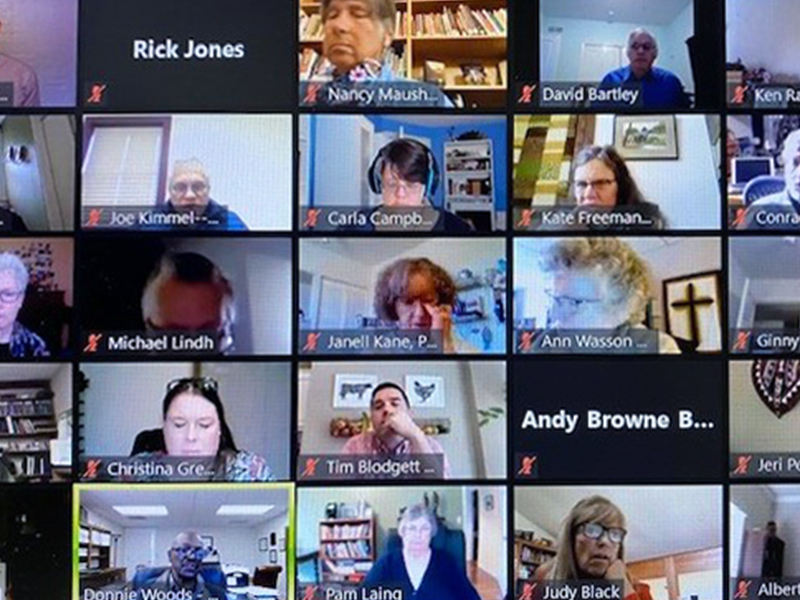 The Mid Council Leaders Gathering was held online this year and reduced to one day.

Mid council leaders from across the country gathered virtually on Thursday for a streamlined, one-day meeting to talk about the issues that have had a huge impact on the Presbyterian Church (U.S.A.) this year. Like most national conferences, the COVID-19 pandemic has forced planners to go online for the annual Mid Council Leaders’ Gathering.

The theme was “Wholeness in Times of Crises” and began with a panel discussion about leadership in a crisis. The panel consisted of the Reverend Dr. Diane Moffett, president and executive director of the Presbyterian Mission Agency; the Reverend Frank Clark Spencer, president of the Board of Pensions; and the Reverend Dr. J. Herbert Nelson, II, Stated Clerk of the General Assembly of the PC(USA).

The conversation began around the impact of the COVID-19 virus on churches the past seven months.

“There’s been a lot of stress around the issue of how to find new ways of doing church, communion, conduct meetings, and especially around technology. Many members feel disconnected and are yearning to be together in the old way,” said the Reverend Dr. Donnie Woods, general presbyter of Charleston Atlantic Presbytery. “Pastors and staff are stressed out with new layers of responsibilities. It has been an ongoing struggle as churches think about moving forward to determine what policies and procedures need to be in place as well as dealing with some technology issues like dealing with copyrights as it relates to music used on Facebook.”

An online poll taken of attendees indicates that the impact of COVID-19 is different from church to church, but fatigue among pastors and staff is high. Spencer says the Board of Pensions has taken steps to try and help in that area.

“We’ve expanded the number of counseling visits that are included in the Employee Assistance Program,” he said. “There are a whole range of counseling opportunities from legal support, ministry, and other areas.”

Susan McGhee, executive presbyter of the Presbytery of Ohio Valley, says fatigue is strong among pastors as some congregations have gone back to in-person worship, even as the number of infections is on the rise.

“Some congregations are singing, even when they are asked not to and members are testing positive for the virus,” she said. “Pastors are looking for guidance on how to encourage congregations to push the pause button and take precautions. I’ve never seen pastors work so hard.”

Despite the troubles, Nelson says he’s seeing a mixed bag of responses and reactions to the pandemic.

“Churches are looking at how to begin to develop/expand ministries that don’t necessarily require going into a building and some are wondering if they will ever go back to a building,” he said. “Aside from fatigue, I’ve seen ingenuity, imagination, and stretching to build on ministry.”

“What this pandemic has done is to push us kicking and screaming into the 21st century with the necessity for a skill set to deal with technology,” said Moffett. “We have to develop 21st century models for ministry. There’s so much we have to consider in terms of becoming adaptable.”

The attendees also took up another pandemic that is impacting the church, racial injustice. In another poll during the meeting, attendees were asked to describe the work of dismantling structural racism. Many shared terms such as challenging, frustrating, slow, evolving, difficult, and limited.

“What we are discovering is more of a propensity to deal with it because of COVID-19, George Floyd, Breonna Taylor, or Jacob Blake,” said Moffett. “It is a complex and challenging thing to lead during this time.”

Nelson says he’s received a lot of feedback across the denomination, both in support of or against the PC(USA)’s public position on structural racism and the Black Lives Matter movement.

“We have to be the church and we have to look at the way Jesus lived. He was a revolutionary, challenging power and principalities,” he said. “The challenge for today is how do we reconcile our own struggle for privilege and power and begin to utilize inner strength to stand with those lost, locked out, and abandoned in this period of history?”

Despite both the pandemic and social unrest across the country, PC(USA) leaders say they are seeing many across the denomination step up to connect and build on ministry.

“We’ve hosted a well-being retreat on a quarterly basis that would normally attract about 125 people each time,” said Spencer. “We now hold these sessions online monthly and we have an average of 250 people every single session. We are reaching thousands now instead of hundreds.”

The Mid Council Leaders Gathering brought together the denomination’s many executive and general presbyters along with stated clerks, Committee on Ministry and Committee on Preparation for Ministry leaders, and business and financial leaders. In recent years, the gathering extended over three days, with several speakers and workshops followed by a meeting of the Association of Stated Clerks. The continued impact of the virus forced leaders to streamline plans.

This year’s gathering was cosponsored by the Office of the General Assembly, the Board of Pensions of the PC(USA), and the Presbyterian Mission Agency.