Home News Harbors and Horizons: Faith and life shaped by both

Harbors and Horizons: Faith and life shaped by both 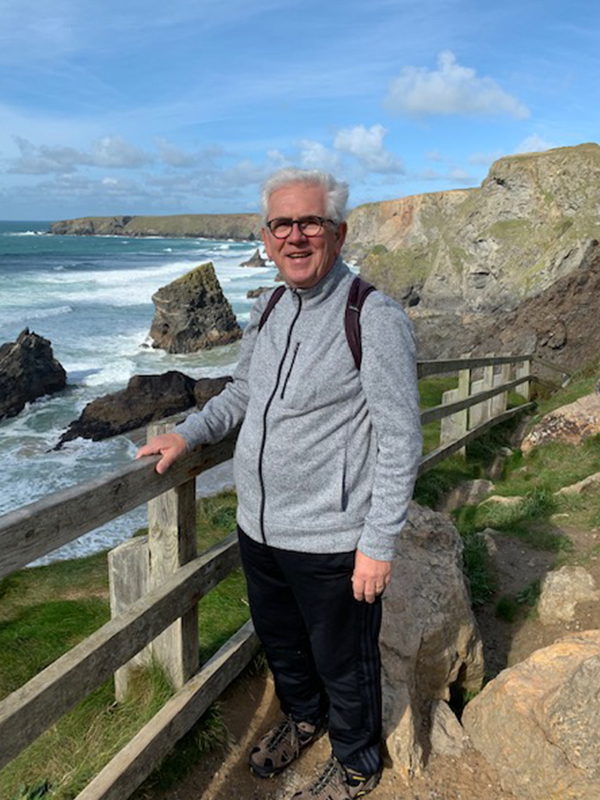 The Reverend Dr. Edward J. Thompson recently celebrated 25 years with the Presbyterian Church (U.S.A.). Raised in Northern Ireland and a graduate of Durham and Edinburgh Universities, he was ordained by Edinburgh Presbytery, Scotland, in 1982.

After serving several years with the Church of Scotland, Thompson came to the PC(USA) where he pastored Presbyterian churches in Kansas City and Naples. He joined the Board of Pensions in 2013 and recently moved to a newly created position with the board as director of interagency relations based in Louisville.

Thompson has shared his reflections of a quarter of a century in the Presbyterian church.

A good number of yesterdays ago, I grew up amidst fathomless harbors and fantastic castles. I now celebrate 25 years living amidst wide horizons and waves of wheat. I think of my faith journey and life pilgrimage as one shaped by harbors and horizons. Harbors, if they are doing their job, offer shelter and a place to prepare for a journey that will take you to wide majestic horizons. Horizons beckon and invite us to venture beyond what is known. Jesus’ call, “Follow me,” is a call with no end date. It is as fresh as the morning sun and as comforting as the setting sun. It’s a call from harbor to horizon.

My journey “across the pond” has been completed by so many before me. Although life-altering, my journey could be likened more to a Sunday afternoon walk when compared with those who generations earlier risked everything to venture into an unknown.

As a young boy I remember Sunday afternoon family walks. Down past the railway station and on through large iron gates into the town park. It was a park for Sunday walking and not a lot else as ball games were “prohibited” and the swings were padlocked on Saturday nights in fear that any child should dare enjoy the Sabbath! Through the park you exited through more iron gates onto the waterfront with the horizon dotted with sail boats and the occasional large freight tanker making its way to and from the city of Belfast, some 10 nautical miles due south. The calm waters of the lough gave no indication of the crossing beyond out into the Irish Sea. On a clear day you could believe that you could see the southwest tip of Scotland to your left, and to your right the tall yellow crane known affectionately throughout Northern Ireland as “Goliath” towering over the distant city landscape. This mammoth crane bore testimony to the muscle and might through years of shipbuilding. Earlier that very muscle and might mixed with the music of wood and metal being fashioned into the Titanic. As that ship got its toes wet on its way to the Irish Sea, those on board looking to the port side enjoyed the majestic site of my place of birth, Carrickfergus, known for its deep harbor and towering castle. The Norman castle is in as good a shape today as it was when it first had overnight guests, some 900 years earlier.

As we walked closer to the castle and harbor my parents’ grip on my hands became tighter! As close as I could get to the harbor edge was my goal! It was over the edge where all the music was. Some 10 feet below, if the tide was out, one could find folks busy on their boats, sweeping and sorting, fussing and fixing, preparing and planning for a sail, but still firmly tied to land. Sunday by Sunday I would hear the same music, see the same folks, see the same boats, which never looked that they had been anywhere since last week! The Sunday afternoon walk continued, this time past St. Nicholas Church that seemed as old as the castle. We would walk through the graveyard and peep through the long, narrow window of the church, the only one not composed of stained glass. This one window had an amazing story. It was so angled that looking through from the outside one had a view of the Lord’s Table. The window was known as “The Lepers’ Window,” through which the sacrament of Holy Communion was passed to those of the town’s leper colony who gathered outside. In its own beautiful way, this window was both a harbor and a horizon, a harbor of grace and mercy and a horizon of hope and holiness, as bread and wine were passed through.

Carrickfergus, with its tall castle and deep harbor, was also a place that, in the 1970s, offered those fleeing the violence and terrorism of Belfast a safe place to rest a while, a harbor of peace from the war of bigotry raging just miles and minutes away.

As a teenager I sat upstairs in church close to the windows that offered a good view outside toward that lepers’ window of the neighboring church and beyond to castle and harbor and to the park where, it being Sunday, the swings would be padlocked so no innocent child could scrape a knee or stir the wrath of God. Those rules were drafted and posted by the town council, some of whom taught me in Sunday school! My window view offered glimpses of elders on duty, whose task was to keep vigil on the outside to prevent us becoming prey to a bomb attack while responding to the call “Let us pray.” This window, so very different from that Leper’s window of grace and hope, of harbor and horizon centuries earlier.

As teenage years gave way to adult life, my journey of life continued to be marked by places of harbors and castles. To castle and cathedral of Durham University, then to New College Edinburgh University in the shadow of Edinburgh Castle. The gates of my childhood park were now replaced by the gates of New College. High on The Mound in Edinburgh, these gates offered a harbor of learning in the reformed faith and as I exited each day through those iron gates, I passed the tall statue not of Goliath but of John Knox with his arm outstretched to the world beyond. This view through the gates was breathtaking across the cityscape, and across the “Firth of Forth” and the wide horizon beyond. From there I exited to serve first a highland parish in Sutherland on the east coast in the shadow of Dunrobin Castle, and then a parish on the west coast, in Troon, with its harbor and horizon.

In 1995 I left harbor to venture forth to fresh horizons on the edge of the Kansas prairie. Yes, this journey could not have been any more different from those who years earlier had crossed by ship and become homesteaders, tilling the baked soil of summer and wrestling the frozen soil of winter. Replaced was the “red sky at night a shepherd’s delight and a red sky in the morning a sailor's warning” with a sky lighting up with the firework of thunder and lightning storm. Torrential rain was now replaced with tornadoes, castles were now replaced with storm shelters. Fields of sheep were replaced by waves of wheat.

You and I share this harbor of Reformed faith. A harbor at its best provides a place of rest and replenishment. In this harbor of faith, we find God’s mercy and grace in abundance. May we hear God’s gentle whisper and even at times may we hear a loud and disturbing voice in the night. Whisper or shout, may the Holy Spirit move women and men to venture out in faith. The lives of Sarah and Abraham, Ruth and Naomi, Samuel and David, Mary and Joseph, Peter and Paul, St. Joan and St. Teresa, John Knox and John Calvin, Bonhoeffer and Barth, the child with loaves and fish, and the folks lowering a friend down through the roof, all speak of faithfulness and following, lives shaped by harbors and horizons.

In this, my 25th year working with the church, I find myself now working for the Board of Pensions of the PC(USA) and a major part of my work is a new venture as a director of interagency relations, working in the Presbyterian Center in Louisville alongside the agencies of the denomination. This work depends on collaboration in our deep Presbyterian harbor of reformed tradition joined with energy and imagination as together we respond to Christ’s call to venture into new horizons and beyond.

The church is often likened to a ship. Ships were not built to clutter up harbors but to venture out toward the horizon with purpose and possibility, with mission and meaning.

I am grateful for those who have helped shape my soul as I continue the never-ending task of following. I am thankful that my “inscape” has been touched by the landscape of harbors and horizons. My challenge is that in the midst of harbors and horizons, can I become a window through which God’s grace and holiness reach in and touch me, prompting me to reach out and touch the world with integrity, faith, and hope.

Tags: board of pensions, edward thompson