Presbyterian-Episcopal dialogue looks at the needs of a changing church

One finding: Ecumenical partnerships often occur at the grassroots level 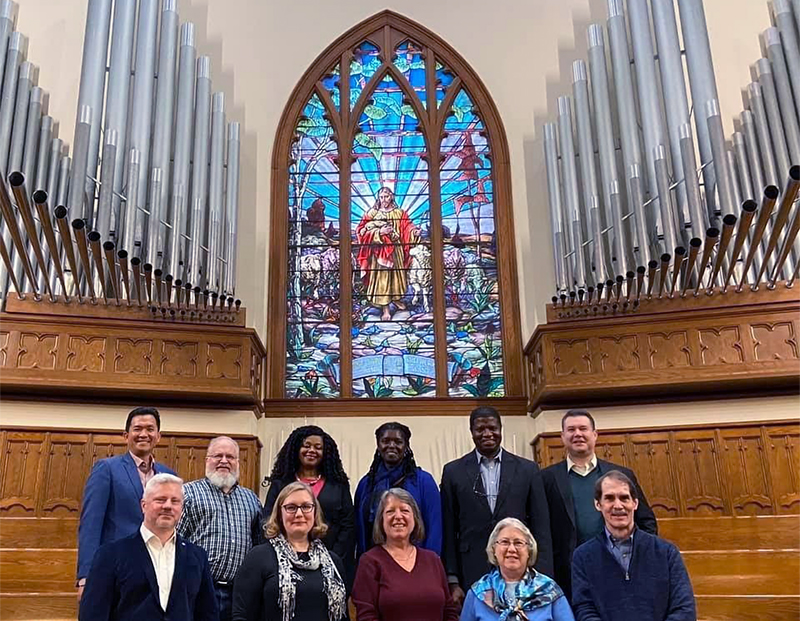 Meeting at First Presbyterian Church in San Diego Feb. 17-19, representatives of the Episcopal-Presbyterian Bilateral Dialogue met and considered how the two ecclesial traditions could partner with each other considering the context of the 21st century church.

Representing the Episcopal Church at the gathering were the Rt. Rev. Eugene Taylor Sutton (co-chair), the Rev. Canon Elise Johnstone (co-vice chair), Dr. Michael Booker, Elizabeth Ring, and Richard Mammana, serving as staff liaison.  Other members of the dialogue from the Presbyterian Church (U.S.A.) are the Rev. Brooke Pickrell and (alternate) Rev. Brian Entz and from the Episcopal Church, the Rev. Dr. Joseph Wolyniak and the Rev. Margaret Rose, serving as staff.

This was the second meeting of the third round of bilateral dialogues between the two ecclesial communions.  The meeting was grounded in prayer, scripture and song.

Representatives discussed at length how the two communions might, at some time in the future, look to a limited exchange of ministers, noting especially the good work that has been done in the Churches Uniting in Christ (CUIC) and the June 2017 CUIC liturgy where all CUIC members recognized the ministries of each member body, in light of the 2008 agreement between the two traditions.

Representatives affirmed that there are practical differences in the denominations, but that as there are fewer  young people who have knowledge of any church body at all, the Episcopal Church and the PC(USA) are in a significant moment of being able to work together to build up the body of Christ.

Both the Rt. Rev. Susan Brown Snook, bishop of the Episcopal Diocese of San Diego, and the Rev. Michael Mudgett, executive presbyter of the Presbytery of San Diego, met with members of the dialogue to share about ecumenical and interreligious partnerships ongoing in the local area, especially those relating to caring for migrants on the border.

The members of the dialogue will meet again September 16-18. They’ll be hosted by The Episcopal Church.