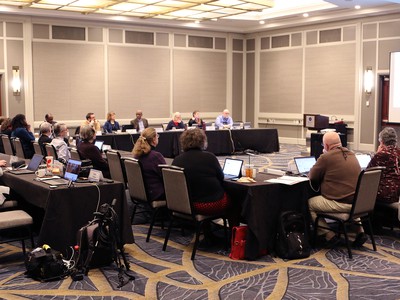 COGA meeting in Baltimore in February 2020. —Photo by Randy Hobson.

In their monthly video conference call, members of the Committee on the Office of the General Assembly (COGA), set aside time from their agenda to share and pray about the impact of COVID-19, also known as the coronavirus, on churches and presbyteries.

The Reverend Eliana Maxim, co-executive presbyter with the Presbytery of Seattle, shared news about the continuing spread of the virus in her community and says U.S. churches and church leaders across the country should be very concerned.

“We are dealing with a different reality now. I’ve got one minister in our presbytery that is gravely ill, and we’ve had several deaths because of the virus, and we can’t do funerals,” she said. “There is one field hospital being built on a soccer field because our current hospitals can’t accommodate all of the patients coming in. We are mobilizing ecumenical partners to look at helping the homeless because the virus will hit them eventually.”

Maxim adds that the impact is taking its toll on pastors and chaplains.

“We should be aware of the realities people are dealing with. We have burned-out pastors, our chaplains are at the forefront, showing up to work every day to deal with end-of-life issues. Families can’t be with loved ones at the end of their lives because it’s not allowed,” she said. “We are entering a grief phase now. We’ve been in our homes for two weeks with the realization that several of our churches in the presbytery will not survive this virus.”

Other COGA members from across the U.S. agreed that some regions have yet to cancel in-person worship and that pastors are “stressed to the max” trying to meet the needs of a congregation.

“We can’t assume everything will be over in two weeks. I’m working on some resources now that churches can use over the next two Sundays,” he said. “In April, we will have worship via Zoom. In the meantime, staff is working remotely.”

Lovell-Martin added that public beaches in Miami County are just now closing amid the spreading virus.

Ruling Elder Vilmarie Cintrón-Olivieri, Co-Moderator of the 223rd General Assembly (2018) of the Presbyterian Church (U.S.A.), says the Presbytery of Tropical Florida is checking in weekly with pastors and church leaders and has suspended in-person worship for the time being.

“This has nothing to do with lack of faith; it’s about being good neighbors and being good to those around us,” she said. “This will take a while, perhaps months, and we should be aware that it will take months for a cure.”

The Reverend Cindy Kohlmann, Co-Moderator of the 223rd General Assembly (2018), lives in the Boston area and says they are a few weeks behind Seattle as far as the virus goes, adding that dorms at major universities are being converted into hospital rooms.

“For those of us who are part-time at the mid council level, or with mid councils with volunteer or no clear leadership, there is a level of support that is missing and that is a need that the synods may not be able to step into,” she said. “There are simply a lot of things we can’t offer because of a lack of personnel and time.”

“We in Nebraska are fortunate that we have a medical center at the University of Omaha that specializes in infectious disease. However, many churches in the state feel like the virus won’t come to them, thinking that small communities won’t be impacted,” she said. “The governor has restricted public gatherings to no more than ten people for two weeks and that includes houses of worship.”

While many families work from home, Masters says that doesn’t apply to her household.

“My husband is a construction worker who still has to work. We are facing the reality that if he doesn’t work, he doesn’t get paid. He does what he can to distance himself from his co-workers,” she said. “In the midst of that, we’re trying to figure out how to take care of a congregation and how to be church so we can avoid what is happening in Seattle, New York City, and Boston.”

Masters says people in her community have heard for weeks from various sources that this is no big deal. Now, she says, they’re learning otherwise.

“A lot of these students are from places affected by what’s going on and are serving in congregations as student pastors,” he said. “In addition, it’s nearing the end of the semester and they’re focused on exams and call searches.”

Maxim urged churches to take the virus seriously. “My fear is that we are at the forefront and it’s coming your way like a tsunami. We still have people meeting for worship in this country and its frightening.