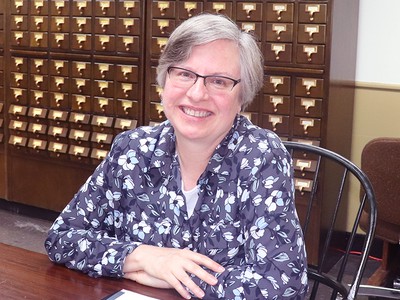 Located in Philadelphia since 1852, PHS is an Office of the General Assembly ministry.

“Nancy not only brings a passion for the work of the historical society, but a deep commitment to the mission of the Presbyterian Church (U.S.A.),” Nelson said. “She is an experienced leader who is respected and effective in making and maintaining relationships. We are grateful for Nancy’s willingness to serve in this new capacity and look forward to the fruits of her leadership.”

Taylor’s track record at PHS is impressive. Since 2011, she has overseen PHS programs and services, edited "The Journal of Presbyterian History" and managed the popular Research Fellowship program.

In the last eight months, Taylor served on the COGA-PHS Task Force that drew up 11 recommendations for the future sustainability of PHS. She also worked to further the society’s four feature initiatives: the Pam Byers Memorial Fund/LGBTQIA+ History Collecting Initiative, the African American Leaders and Congregations Collecting Initiative, the “Building Knowledge and Breaking Barriers” collaboration with the Community College of Philadelphia, and the Religious News Service Photographs Pilot Project.

“I am so proud of what PHS has done over its 160-plus years and what we will continue to do as the national archives of the Presbyterian Church (U.S.A.),” Taylor said. “Our collections speak to the history of the church and the many individuals who have shaped the history of Presbyterianism and Reformed Christianity.

“That history is deeply American in all of its complexity, and it informs our present and future actions as a church, even pushing us to take a different course to mitigate the sins of the past. PHS is blessed to have so many supporters who value the archival work needed to collect, preserve, and share that history.”

Ernest R. Higginbotham, PHS Board chair, said this about the choice of Taylor as executive director: “As acting director, Nancy managed PHS so well our operations did not skip a beat and we retained our full staff and services. As permanent executive director, she will continue to provide terrific leadership and help PHS serve more Presbyterians, scholars, and students in this challenging time and for years to come.”