Committee confident of 'prophetic vision' for the PC(USA) 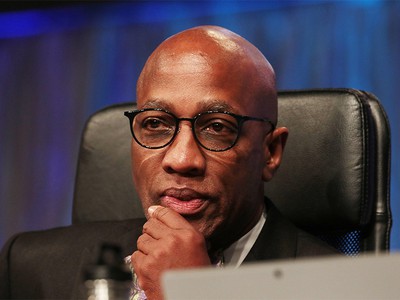 The Stated Clerk Nominating Committee (SCNC) announced Tuesday that it is recommending the Reverend Dr. J. Herbert Nelson, II, for a second term as the Stated Clerk of the General Assembly of the Presbyterian Church (U.S.A.). Nelson, who completes his first term in June, was first elected to the post at the 222nd General Assembly (2016) in Portland, Oregon.

Per Standing Rules of the General Assembly, the Stated Clerk is elected every four years and applications are available to all ruling elders and ministers of the Word and Sacrament.

“In his first term as Stated Clerk, J. Herbert began the monumental work of leading our denomination away from an institution and into a movement of God’s justice, love, and peace,” said Wilson Kennedy, committee moderator. “In our conversations with him, we were convinced of his humble spirit, pastor’s heart, and prophetic vision for God’s kin-dom.”

Kennedy, who also serves on the Committee on the Office of the General Assembly (COGA), says the nominating committee felt Nelson is putting the church on the right course for growth and ministry.

“Personally, his emphasis on faithful innovation at the forefront of our common witness as Presbyterians — all the while remaining true to our Reformed heritage, confessions, and, primarily, Scripture — is a compelling vision for how we might be the church now and in the future,” Kennedy said. “The committee is confident that God is continuing to call him to this work and trust that he will lead our church with energy, intelligence, imagination, and love!”

Other committee members echoed that sentiment.

“I have a deep passion for the ecumenical work of the church and see the need for transformative change and vision in this area. J. Herbert has that,” said Leon Lovell-Martin, COGA member, who also serves with the Presbytery of Tropical Florida.

“I appreciate that the Stated Clerk is real about the limitations we have to name and address,” said Marcia Mount Shoop, former COGA member who also serves with the Presbytery of Western North Carolina. “He invites us as a church to greater adaptivity, humility, and compassion. He loves God and the church and is leading from that place.”

Nelson says he is honored to receive the committee’s recommendation and looks forward to the start of his second four years.

“I’m excited about what is in front of us. I recognize people are predicting loss in the coming year, but our communities and churches are resilient,” he said. “We have expanded our relationships with cities like New York and have an opportunity to engage in the broader work in the life of Christendom. The groundwork has been set for growth in the life of the denomination to recapture the essence of theology and ecclesiology moving forward.”

The SCNC, elected by the General Assembly, meets near the end of the Stated Clerk’s term of office, receives and reviews applications for the position, and declares the nominee no later than 60 days before the opening of the 224th General Assembly (2020).The committee began its work last October.

The General Assembly is currently scheduled for June 20–27, 2020, in Baltimore. However, COGA is considering other options in light of the COVID-19 outbreak.