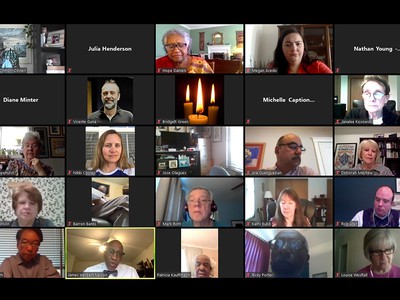 It’s Leader Briefing day Tuesday for a small group of Presbyterians taking part in the 224th General Assembly (2020) of the Presbyterian Church (U.S.A.). But this year it’s different. For the first time in the denomination’s history, the entire briefing is taking place online.

The COVID-19 virus has caused many firsts for churches, businesses, and life in general, including Tuesday’s briefing. The Office of the General Assembly has spent several weeks working out the technical issues to make it possible. Next month, the 224th General Assembly (2020) of the PC(USA) will be conducted entirely online.

Today’s gathering began with greetings from the Co-Moderators of the 223rd General Assembly (2018), the Reverend Cindy Kohlmann and Ruling Elder Vilmarie Cintrón-Olivieri. Kohlmann thanked participants for their commitment in the midst of changing times.

“Everything is different now and you are still willing to serve even though things have changed,” said Kohlmann. “Thank you for creating community among commissioners who will not be able to gather face to face. We appreciate all you have done as the world has changed and the church has responded.”

“In the most difficult and trying times, the grace of God has been with all of us,” said Cintrón-Olivieri. “Your willingness to serve as commissioners and now as the sole community is appreciated. Gracias for your willingness.”

The Reverend Dr. J. Herbert Nelson, II, Stated Clerk of the General Assembly of the PC(USA), announced the new theme for this year’s gathering, “From Lament to Hope.” Despite the disappointment of not gathering in Baltimore, Nelson says the church should be proud of what has been done so far in the host city.

“We had young people serving in the community working on projects lifted up by Presbyterians, shepherding programs for youth and opening new doors for many and continuing to walk by faith in so many ways,” he said. “We did not leave Baltimore behind. We’ve shown up for the last two years and even though we won’t be in Baltimore, our imprint is there.”

Nelson said the church needs to look at the current situation as an opportunity to reevaluate how to best serve.

“Now we find ourselves preparing to go into another place called cyberspace. We are struggling and struggling hard to try and replicate general assemblies of the past, but our options are limited,” he said. “General Assembly may not be what we are accustomed to and it may not feel the same because we won’t see friends we usually meet up with.”

Nelson told those online that he had been contacted by another denominational leader saying they would be watching to see how the PC(USA) fares in this year’s digital assembly.

“This can be a pivotal General Assembly for the entire world of Christendom in the U.S. as we find a way to carry out the work of faith and declare that we won’t allow forces or any other obstacle short circuit the work and will of almighty God,” he said.

In explaining the decision to go with digital assembly, Nelson said there were no other options.

“We narrowed everything down to those things we had to do constitutionally to get through a General Assembly and meet the mandates,” he said. “We could not cancel it. It wasn’t part of what we do or our own record of understanding. We had to have a General Assembly.”

Nelson said the church is entering a new world, adding that it is about faith and getting beyond the struggle of doubt.

“This is a test for us in the PC(USA) to see if we will be faithful in all things, to see if we can still praise the Lord amid this not being what we thought it would be, and to rejoice in things we’ve left behind,” said Nelson. “That’s a faith and love question. That’s a question of who we are as Presbyterians.”

The meeting continues throughout Tuesday afternoon.