Faith leaders across the country gathered virtually on Monday to commemorate Martin Luther King, Jr. Day and to lift their prayers and concerns as a new president prepares to take office. The Poor People’s Campaign: A National Call for Moral Revival, led by the Rev. Dr. William J. Barber II and the Rev. Dr. Liz Theoharis, called for “light, love and leadership” during this time of pandemic and political chaos.

The day began with a news conference hosted by the campaign leaders with guests from various faiths and denominations, including the Rev. Dr. J. Herbert Nelson, II, Stated Clerk of the General Assembly of the Presbyterian Church (U.S.A.).

Barber began the news conference by saying the country needs leadership with a moral agenda.

“This moment in our nation is not about left versus right or centrist and it should not be about Republicans versus Democrats and Independents,” he said. “We are very clear, and our deepest religious and moral documents tell us that there is no way for ultimate healing in the nation without breaking the chains of injustice and getting rid of exploitation. Jesus told us that a nation that’s going to truly be healed and great must start at the bottom, the least of these, and would be judged by how that nation treats the poor, the hungry, the sick, the stranger and those on the margins of life.”

Theoharis, a PC(USA) pastor, said the nation must have the moral courage to carry on King’s work. 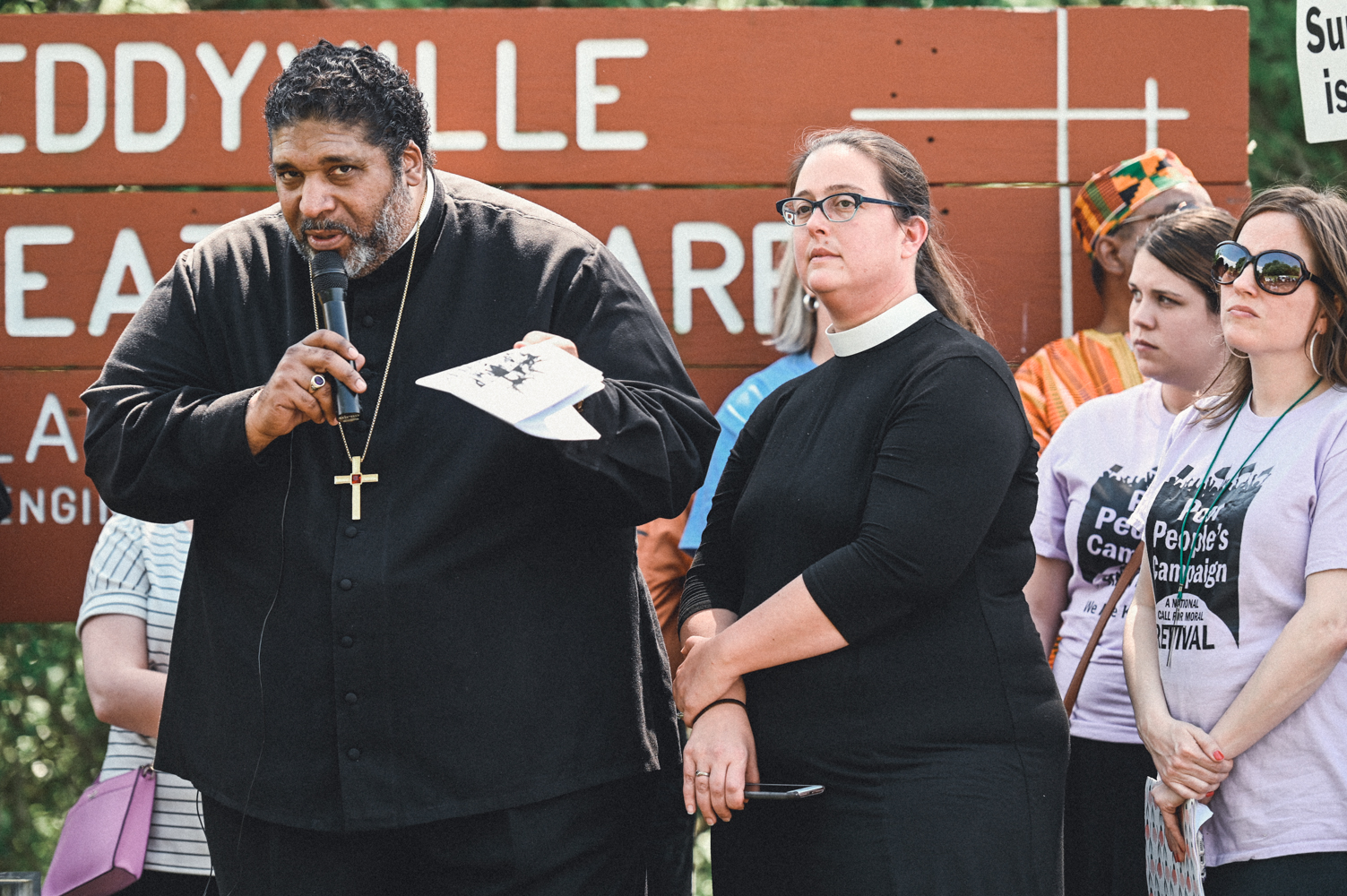 “It must say no to the violence and racism that are so emboldened at this time. It must enact a bold policy agenda that lifts from the bottom so all may rise,” she said. “This week, President-elect Joe Biden and Vice President-elect Kamala Harris will be sworn into office and inherit a public health crisis, an economic crisis and a racial reckoning that demands bold action.”

Nelson said everyone must work to heal the wounds.

“As we approach a transition in the leadership, let us be aware that one president did not act alone to shift the trajectory of our nation; nor will one election change the whole trajectory for our nation’s immediate future. We have work to do in this moment and in years to come,” said Nelson.

The attack on the U.S. Capitol nearly two weeks ago, Barber said, is what oppressed people have seen through the years.

“If you do that long enough, it will spill over into the inevitable violence that ideas of white supremacy and lies always produce. And on this day, make no mistake, the same forces of reactionary rage, fueled by lies and white supremacy, that killed Dr. King erected gallows on the National Mall and ransacked the Capitol on January 6,” he said. “If we want to come out of this jam and move forward, we cannot accept racial disparities, violence and breaches that impact Black and brown and Native and Asian Americans while also offering collateral damage to our poor white brothers and sisters and ultimately, our entire democracy.”

The Poor People’s Campaign has organized committees in nearly every state with a focus on systemic racism and poverty, ecological devastation, the war economy, and militarism and a “distorted moral narrative.”

Barber pointed to the more than 140 million poor and low-income people living in the United States, indicating that the number is much higher nearly a year into the COVID-19 pandemic.

“Schoolchildren have been left behind in a poor response to their educational needs as they lay in bed with their unemployed parents,” said Nelson. “Stimulus checks were debated and held while politicians ran for office on multimillion-dollar-plus campaigns paid by those with great money interests while millions of people in poverty are left behind.”

Nelson warned of significant difficulties ahead due to the use of government as a tool of individual power by the Trump administration and various leaders in Congress as well as some preachers.

“The poor in this nation are desperate and vulnerable. Interestingly, most of our holy books call us to seek the poor, despised. However, when the lifeline of hope is no longer in place, it is imperative that faith calls nations and powers into accountability,” Nelson said. “It is imperative that we as faith leaders hold every elected leader accountable, including the dogcatcher.”

Campaign leaders are asking the new administration to embrace the 14 Policy Priorities to Heal the Nation: A Moral and Economic Agenda for the First 100 Days. The priorities include addressing poverty, racism, low wages, lack of health care, immigrant rights, Indigenous rights and more.

“This is the healing that the nation needs. This is the way we build back better,” said Theoharis. “We call on our elected leaders and our entire society to do what the signs held at Dr. King’s memorial read: ‘Honor King, End Racism, End Poverty.’ We call on all to move with us forward together, not one step back.”

Nelson said he is thankful for the transition in government, adding that people cannot be complacent.

“The Biden-Harris ticket will have their days of choosing between God and money,” he said. “Therefore, we must be there to assist them in making that decision. It is time for clergy and other faith leaders to wake up from our deep sleep. People who are left behind need us to help them.”

The news conference was followed Monday afternoon by a national interfaith service.