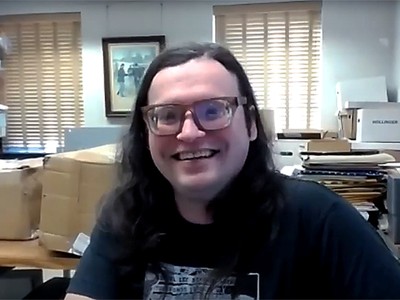 David Staniunas is an archivist with the Presbyterian Historical Society based in Philadelphia.

What can you learn from the past to help shape the work of the present and future?

This topic is of special interest to members of the Presbyterian Peace Fellowship. Since last June, the organization has been focusing on the call to defund police in light of several law enforcement shootings of people of color and the ongoing conversation about inequity in the U.S.

“This call comes from an abolitionist framework. We look back to history to understand, gain inspiration and learn from mistakes to learn how to respond now in light of what happened in Washington recently,” said the Rev. Emily Brewer, executive director of the fellowship. “It’s all connected by white supremacy and anti-Black racism, especially.”

Brewer recently moderated a webinar featuring David Staniunas, archivist with the Presbyterian Historical Society, who shared bits of history of Presbyterians and the abolition movement.

“My job is to be the first point of contact for anything that can become part of the Church’s collection. I get it on the shelf and in the database. It gives me a crow’s nest kind of view of Presbyterian history through collections,” he said. “In 2015, I felt there was a necessary conjuncture of archiving matters of social and racial justice. I developed a new awareness that is called upon to do a crash course on abolition movements.”

Staniunas says it would take at least a year to compile the complete historical overview of Presbyterian activity and struggle surrounding abolitionist movements. However, he shared some vignettes where Presbyterians encountered costs and consequences in their efforts to seek justice. Among those was the decision by the United Presbyterian Church in the United States of America (UPCUSA) in 1971 to give $10,000 to activist Angela Davis’ defense fund. Staniunas says the denomination encountered costs and consequences in seeking justice.

“There is an economic and social cost to direct political action. The point of turning the other cheek is that you have put your face in a position to be struck first,” said Staniunas. “The ensuing furor changed the church. Though national church leaders like Bill Thompson and Lois Stair in official statements through 1970 and 1971 assiduously appealed to constitutional values — due process guarantees, equality before the law — the conservative white church wasn’t receptive. Negative responses came in at about 70 to 1.”

Staniunas says that within a month of the 1971 General Assembly, 20 prominent Black Presbyterians each contributed $500 to restore the $10,000 to the UPCUSA.

The Presbyterian Peace Fellowship has been discussing police reform and whether it will be enough to address the worst abuses of police and the prison system in the U.S.

“You’ve heard that you won’t be absolved by future generations — even the people of the 1840s kept statistics that showed their particular form of slavery was especially abusive, and they could not absolve themselves,” said Staniunas. “There’s no grading on a curve for the ‘errors of the age.’”

Staniunas told the fellowship that Presbyterians will be hard-pressed to imagine a society without police in it.

“But you’ve been reminded that Virginians of the 1840s couldn’t conceive of a society without slave labor. You’ve been reminded that paternalistic defenses of slavery were all overwhelmed by abolition,” he added. “And in the work of Gay Wilmore and the people of the church’s Committee on Religion and Race, you’re reminded of the costs of discipleship, which include government surveillance, white vigilantism, public opprobrium and private slander, and economic hardship.”

Following the presentation, Brewer said there is much to learn from the past.

“I am struck by how much money drives so much of our moral positions and how much we do to justify using moral language in what is really in our best economic interest,” said Brewer. “We need to think about how using our resources that have largely been gained through largely white access and how we are using those.”

Staniunas’ entire presentation to the Presbyterian Peace Fellowship can be viewed here.