Home News Conversation with the Co-Moderators

Conversation with the Co-Moderators

Discussion and worship closed out conference

The 2021 Moderators’ Conference ended Saturday night with a Q&A conversation between conference attendees and Ruling Elder Elona Street-Stewart and the Rev. Gregory Bentley, Co-Moderators of the 225th General Assembly of the PC(USA).

In keeping with the conference’s 2021 theme, “And you shall be my witnesses: Cultivating Mission-Minded Leadership,” the co-moderators discussed their own take-aways from the three-day conference, and heard from attending moderators about their experiences. Bentley preached during a closing worship about the parable of the Good Samaritan, linking it to the PC(USA)’s calls for restorative justice.

Street-Stewart began the conversation by saying, “This has been a very valuable three days. Gregory and I want to hear from you about what are the most important things you will take away from the conference.”

Bentley, seconding that interest, said he was “sensing a can-do, want-to-do spirit, which has been confirmed by this conference.”

Before the Rev. Tricia Dykers-Koenig, Associate for Mid Council Relations in the Office of the General Assembly, opened the digital floor to attendees wishing to speak, Street-Stewart offered a few more prompts, including “How are you more equipped?” following the conference, and “How are you more empowered now to go back” to your ministries at mid councils and congregations.

The moderators responding to those prompts had different tenures at their mid councils, with one attendee sharing the news that he had been elected that same day.

All speakers shared their gratitude for the three days of study, plenary discussion, workshops, and small group break-outs, even as several noted other obligations had pulled them away from some sessions.

Two speakers asked for recordings of earlier sessions, when they had been moderating their own presbytery meetings on different Zoom meetings.

One attendee said that despite his busy schedule of church business and worship meetings, his faith that everything will work out in the end had been renewed by the conference’s programming. He joked that “worst comes to worst, that’s why God gave you a stated clerk.”

Multiple attendees spoke of the importance of humility and finding time to recharge — a particular challenge during the pandemic, when Zoom fatigue is a special challenge to a church that emphasizes connection. One speaker mentioned concerns she had about next summer’s hybrid General Assembly, which most participants will experience online.

Other speakers raised up educational opportunities provided by the conference, with one speaker noting that he had learned things about Presbyterian polity over the past weekend he hadn’t in 40 years of church service.

The conference’s music was praised by several attendees and the co-moderators, with Street-Stewart noting that music and other resources from the conference is available for later use via the PC(USA)’s Equip training page.

Street-Stewart gave thanks for the gifts of technology that made so much sharing possible. “God is equipping and guiding us” through digital meetings and workshops, she said. “It is amazing how we’ve blended theology and technology.”

Several attending moderators used their comment time to ask the co-moderators questions, including what had inspired them during the conference and how their year and a half of service as General Assembly 224 co-moderators had changed or confirmed their perspectives. 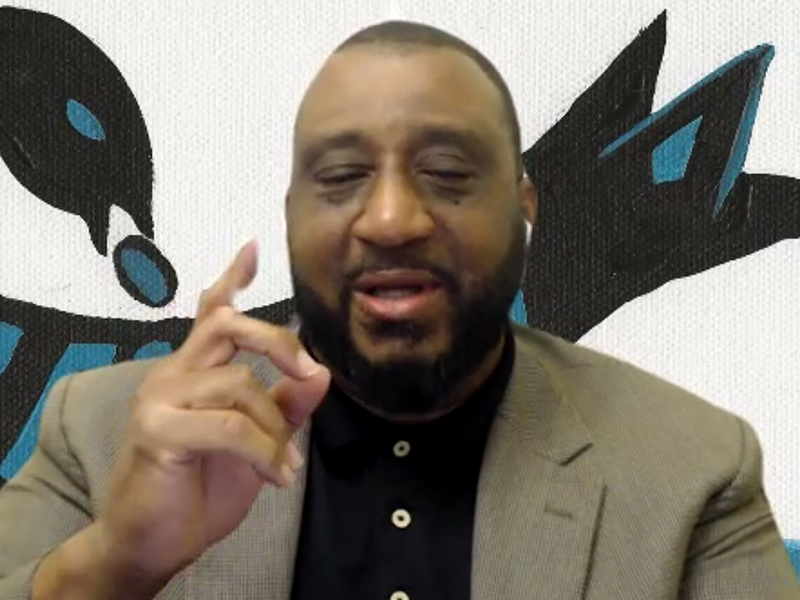 The Rev. Gregory Bentley speaks during closing worship at the 2021 Moderators' Conference.

The Rev. Gregory Bentley speaks during closing worship at the 2021 Moderators' Conference.

Bentley and Street-Stewart spoke about how Matthew 25 discussions with mid councils and churches had given them opportunities to discuss poverty and food scarcity, and to learn more about different community responses.

Bentley said, “COVID has been a great unmasking and has revealed many realities that have been with us since the founding of the republic."

“Matthew 25 and other efforts are helping us look at these issues," he said. "I’ve been heartened to see how committed people are to doing this work.”

Street-Stewart said that she had been reminded of the wholeness of the church.

“As a Native American…I see the world as full of all our relatives.”

Digital visits to churches and mid councils for anniversaries, worship services, and other occasions have helped her “get to know who we all are better," she said.

One attending moderator shared a story about nearly leaving the church after attending a presbytery meeting in the 1990s. A moderator at that meeting had not been “pastoral” toward him.

“I’ve appreciated the focus here on our pastoral relationships,” the speaker said. “Which to me precedes 'Robert’s Rules of Order' in importance."

“The last couple of days," he said, "have renewed and strengthened my faith.”

Bentley appreciated that testimony, and urged Presbyterians to provide more personal reflection of the kind the speaker had shared.

“We need to add more ardor to our order,” Bentley said.

The last attendees to speak praised the conference’s focus on spirituality, with one reiterating Street-Stewart’s message about wholeness, noting that the church is not only an American institution, but a worldwide one.

The Sankofa bird — the GA 224 co-moderators’ symbol for their tenure of church leadership, displayed behind each on Zoom — was also discussed, with its connections to West Africa and the Mississippi River explained by the co-moderators.

Street-Stewart said that getting elected was daunting for her and for Bentley, alluding to previous speakers who had admitted feeling overwhelmed at times by their election as mid council moderators. Having a co-moderator to work alongside has helped Street-Steward and Bentley in their work.

“Gregory and I, we’re like a brother and sister of another mother,” Street-Stewart said. “It’s been great working together.”

During the conference’s closing worship, Bentley preached on the conference theme of closing the loophole, using the parable of the good Samaritan from Luke 10: 25-37 to show that Jesus wants God’s children to get involved with life at its deepest, and most difficult, moments. Presbyterians are called to directly help the needy, Bentley said, just as this Samaritan did.

Bentley preached that the parable emphasizes “restorative justice” instead of the “purity tradition.” He urged the national church, mid councils and congregations to use their resources to invest in efforts toward the well-being of all, restoring the wholeness of all.

“Be participants not just spectators,” he said. “Cast down your buckets in your communities … that we might become closers of the loophole.”

After worship concluded, and the chat window filled with “Thank yous” and “Amens,” Street-Stewart thanked Dykers-Koenig and other staff from the Office of the General Assembly who organized and ran the conference. Dykers-Koenig gave special praise to the co-moderators and conference attendees for attending the gatherings on weekends and nights.

She closed by encouraging attendees to fill out their conference evaluations, which she said would be sent out in a few minutes, immediately after all the Zoom windows closed  ­— at least for the night.