J. Herbert Nelson says people are paying a personal price for the sake of profit 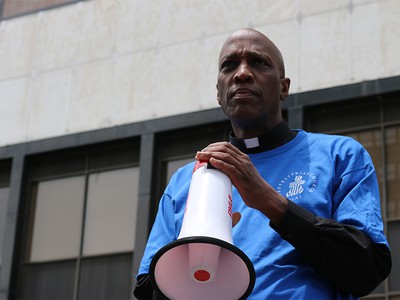 The Rev. Dr. J. Herbert Nelson, II’s issues with private prisons go back long before he began working for the national office of the Presbyterian Church (U.S.A.). When Nelson was a pastor in Memphis, members of his congregation became involved in the efforts to end the practice of corporations making money on people staying behind bars.

The Stated Clerk of the General Assembly of the PC(USA) says he was glad to hear last week that President Joe Biden had signed an executive order to begin phasing out the Department of Justice’s use of private prisons. The department is now being directed to decline the renewals of contracts with privately operated for-profit prisons.

“We have a sitting president who has put this issue front and center in the early days of his administration. Couple that with what is going on at the border that are keeping people from being with their families and being in community,” said Nelson. “We’ve turned our city jails into prisons. People are going into jail on misdemeanor crimes and literally almost serving a sentence. They don’t have money to get out. On the other hand, you see people go into private prisons and they stay there with no way to get out because they are being warehoused for the sake of making money and taking the burden off of the state.”

Nelson adds that the for-profit system had little to do with inmate safety.

“Guards are being hired at minimum wage, which means that individual is not going to go in and try to stop a fight,” he said. “There are so many violations ethically when it comes down to what these companies said they were going to do and the corners that were cut that put inmates in danger. That became a real serious piece for the Church in terms of challenging that.”

Nelson calls it an immoral practice, adding that government should be in the business of rehabilitation and trying to send people back to their homes and communities.

Federal authorities say there are approximately 152,000 people in federal incarceration with 14,000 being housed in privately managed facilities.

“The Bible says we are to ‘set the captives free.’ We are very much in favor of that. We understand that this is not going to mean all jail doors are opened and people get out,” Nelson said. “There are those who have committed some significant crimes and are paying with the time they are sentenced to. At the border, some individuals can bring contraband into the United States. There’s always going to be a need for some level of incarceration.”

Nelson says the wholesale lockup, arrests and earnings on the backs of people who are incarcerated is just not an ethical practice, particularly in relationship to faith.

When signing the order, Biden said the government needs to change its approach on the issue of racial equity.