Home News Want to see what colonized theological education looks like? Look around

Want to see what colonized theological education looks like? Look around 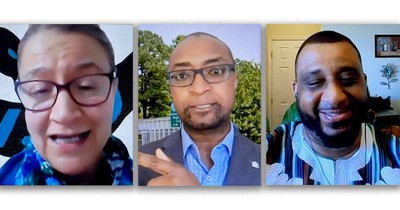 Back in 1971, three young scholars were commissioned to do a study of seminary-trained African American pastors on the South Side of Chicago. The pastors were asked to what extent their education prepared them for ministry in the Black community and church. Their answer: not at all.

“The pastors were saying they were formed in an educational process that debilitated them in terms of serving the needs and thinking theologically in ways that speak to our people or theological miseducation,” said the Rev. Dr. Matthew Wesley Williams. “Colonized theological education either reinforces the social and power relations established by colonialism or it disrupts them.”

Williams is president of the Interdenominational Theological Center, a historically Black ecumenical graduate theological school located in the heart of Atlanta. He appeared as a guest on this month’s broadcast of “Good Medicine” with the Rev. Gregory Bentley and Ruling Elder Elona Street-Stewart, Co-Moderators of the 224th General Assembly (2020).

Williams is recognized for his work in the field of theological education and has built national programs and partnerships among top-level leaders to advance opportunities for institutional change, faculty development, doctoral education, leadership formation, young adult vocational discernment, diversity, equity and inclusion in higher education.

Colonized theological education, according to Williams, grafts people into an “intellectual lineage” that makes them more suitable to reinforce the colonial kinds of structures, power relations and social order that the enterprise and theological education of America has been compatible with for 200 years. He adds that the consequences of this formula are endless.

He referred to last summer with COVID-19 and the killings of George Floyd, Breonna Taylor and others, along with the uprisings that emerged from those deaths.

“All of a sudden, theological schools and churches were scrambling over what to do in the midst of this. My question was what have you been doing?” Williams said. “A first-century Palestinian brown-skinned young adult was executed at the hands of the state, in a manner reserved for runaway slaves and revolutionaries, and we are Christ’s body? What does it mean to be the church, and where have you been that puts you at a loss at a moment where you see similar lynchings taking place in society?”

Williams says it’s hard for the church to have a voice.

“It leaves the church toothless to deal with the flesh and blood realities of what emerges when the empire strikes back,” he said. “When inequity, oppression, dehumanization and systems that reinforce that bring their forces to bear on the lives of people, the church is at a loss and rendered ineffective.”

Williams told the Co-Moderators that institutions would have to disavow the dominant value system of the western academy, which locates knowledge in particular places and suggests that knowledge doesn’t exist in other places.

“Our theological schools to this day are organized according to disciplines that fragment knowledge according to specific intellectual disciples,” he said.

Williams believes practical experience is just as important in the learning process, and that means connecting with community.

“How we resituate disciplines but also where we think knowledge is generated can help us reconstruct our curriculum and formative experiences that might pair a traditional scholar with a farmer, or pair an ethicist with a church mother. In that pairing, have genuine dialogue in ways that help to form the practice of ministry and leadership,” he said. “Because the practice is deemed a lesser form of inquiry, and we tend to think practice is lesser than theory. Knowledge is generated in doing.”

Williams says that if theological institutions have the courage to shift the ideology that is driving them, they can reshape the whole model to access to whole communal bodies.

Institutions could put scholarship in its rightful place so it might contribute to the collective wisdom and practice going forward.