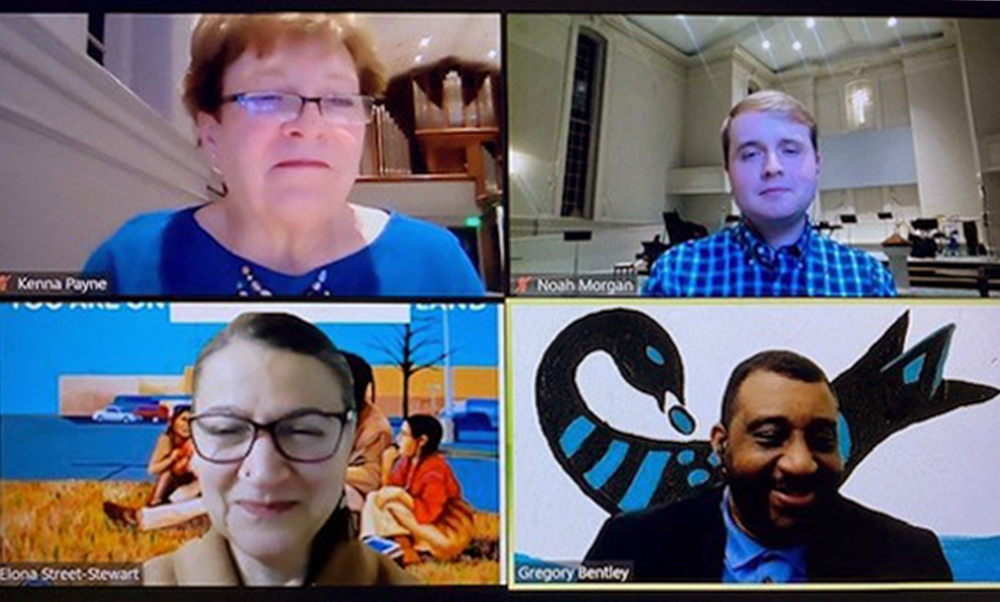 The Co-Moderators of the 224th General Assembly of the Presbyterian Church (U.S.A.) say churches need to step out of their comfort zones to bridge the divide in race relations across the country. Ruling Elder Elona Street-Stewart and the Rev. Gregory Bentley participated in a Zoom webinar initiated and co-sponsored by Westminster Presbyterian Church in Richmond, Virginia but attended by many more congregations. Participants represented 33 different churches, many Presbyterian, but also Baptist, Methodist, and Catholic.

Ruling Elder Kenna Payne and member Noah Morgan moderated the online event reading questions from participating members on the role of the church in their communities and how to build community relationships. The Co-Moderators say it’s hard work, but churches don’t always have to start from scratch.

“Cast your bucket where you are. If you look around your community, you will find an organization or an institution that is living into the Matthew 25 vision,” said Bentley. “We don’t have to re-invent; just look at what’s already going on and move alongside and make it all it can be.”

Street-Stewart says Westminster is in a community steeped in history and she suggests the congregation consider that as they seek equity.

“You are in a place where you can lead conversations about memorials or street names,” she said. “You can bring honor to persons buried in cemeteries that are segregated or don’t have headstones. These conversations can touch your community in deep ways.”

The Co-Moderators told Westminster members that the needs are all around them.

“There’s an inverse relationship between charity and justice. If you need a lot of charity, there’s a lot of injustice. At some point, you’ve got to deal with the cause,” said Bentley. “That’s when we put our hands to the work of justice. We have to ask the tough questions. Why do we have so many hungry people when we live in a land of plenty?”

One Westminster member asked how churches and individuals can get connected with other groups without stepping on toes.

“You have people that are part of charter organizations that have been around for generations. Start talking with members of those organizations,” Street-Stewart said. “Find out what the opportunities are to learn or participate.”

Some of the discussion centered on how the church can be more connected to the community. Bentley said, “You gotta just do it.”

“I’m more concerned about being hospitable than being welcoming and polite. Hospitality is inviting someone into your life, creating a safe space to work and build together,” he said. “That means you have to risk discomfort, risk going outside where you may feel you have some type of expertise. It means taking the risk of being misunderstood, ridiculed or even severing relationships we’ve had in the past that have been holding us back from where God wants us to be.”

Street-Stewart adds that it means more than just opening the doors of the church to the community.

“The need is to be there to participate in community activities, such as supporting someone else’s child in a sports program or arts project,” she said. “What does the artwork or pictures in your building represent? Are they white or do they represent the full diversity in your community? What type of music is played at church? Do the books in your church library represent your community?”

Street-Stewart adds that churches need to provide multiple language support and ensure that their building is accessible with numerous ways to participate.

Both Street-Stewart and Bentley told the church members that starting this kind of work can be scary and overwhelming, giving members a sense of vulnerability.

“It’s like starting an exercise program. Everything hurts. You must change what you’re doing in order to change your thinking. If you do it long enough, your thinking will change,” said Bentley. “You have to work through all of the resistance or excuses like ‘We’ve never done that before.’ Change your behavior and do it because it’s right.”

“There is a lot of mythology about ourselves that suggests we are the greatest and well intentioned,” he said. “We have to look at ourselves as we are. We don’t have to lie about America in order to love America. For it to become all it can be, we have to tell the truth, even if it makes us uncomfortable.”