Wright, Henderson increase roles with Office of the General Assembly 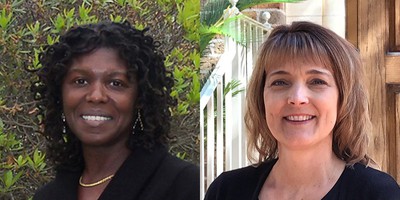 After serving in an interim role with the Office of the General Assembly for more than 18 months, Dianna Wright has been named director of ecumenical and interreligious relations, filling a vacancy created in 2019 with the passing of the Rev. Robina Winbush.

The Rev. Dr. J. Herbert Nelson, II, Stated Clerk of the General Assembly of the Presbyterian Church (U.S.A.), announced Wright’s appointment today. He also announced that Julia Henderson, who had been serving OGA in a part-time capacity for the past several months, will now devote full-time hours to the denomination.

Henderson, who served as interim director of Assembly operations, oversaw preparations and planning for the Church’s first online General Assembly last summer. She will continue to serve as leader for GA planning and business management through the 225th General Assembly in 2022.

“We have been blessed with the opportunity to work with two individuals that have brought new vision to the work of this office,” said Nelson. “I am thrilled to have both Dianna and Julia continue to share that energy and passion to serve Christ. These are difficult days as we struggle with the pandemic and racial justice issues. We need leaders like these to help us find a new way to be church in these times.”

Prior to her new role, Wright served as a member of the Committee on Ecumenical and Interreligious Relations for six years. She also served as associate presbyter with Salem Presbytery in Clemmons, North Carolina.

“I am excited about God’s call to serve and participate in the ecumenical and interreligious work of the Church, and we are looking forward to sharing in the Stated Clerk’s vison,” she said. “Specifically, we are discerning ways we can assist congregations and presbyteries to live into our agreements with our ecumenical and covenant partners. And as we think about the future of church and navigate our way through COVID-19, we must expand the ways we worship and work to include the gifts our ecumenical and interreligious neighbors bring to how we accomplish God’s will for the world.”

Henderson’s responsibilities also include working with other denominations and organizations interested in utilizing PC-Biz, the church’s website for conducting General Assembly business.

“Our GA planning and the new PC-Biz business venture are both born out of the Stated Clerk’s vision for our Church in the 21st century,” she said. “We are challenged to rethink and optimize the work of the General Assembly in ways that align with the values in the Clerk’s vision. Leasing PC-Biz to other organizations allows us to capitalize on, and continually innovate, this robust tool for the benefit of other organizations and ultimately our own GA.”