Debt relief and transparency on the agenda with Janet Yellen 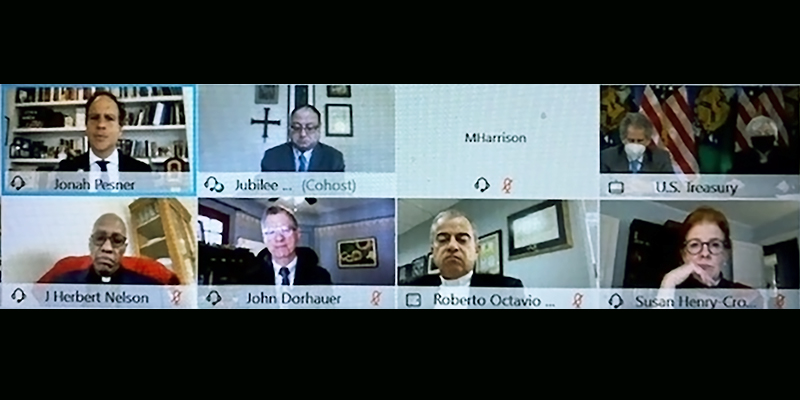 The Rev. Dr. J. Herbert Nelson, II joined principal leaders of other Christian and Jewish faiths in a conversation on Tuesday with U.S. Treasury Secretary Janet Yellen. The new Treasury official met with more than a half dozen leaders representing the Presbyterian Church (U.S.A.), United Methodist Church, Evangelical Lutheran Church in America, U.S. Conference of Catholic Bishops and the Union for Reform Judaism, among other groups.

The virtual roundtable discussion was moderated by Jubilee USA Network, a nonprofit financial reform organization based in Washington, D.C., that advocates for debt relief for developing countries. Tuesday’s conversation centered on the global coronavirus response and anti-poverty efforts.

On Monday, Jubilee sent a letter to the White House, urging the International Monetary Fund, the G20 (an international forum for the governments and central bank governors from 19 countries and the European Union) and the U.S. government to cancel debt payments and expand debt relief to developing countries to improve health care and protect workers dealing with COVID-19. The letter also calls for the implementation of financial crisis and market protections and the promotion of responsible lending and borrowing as well as the curbing of corruption and tax evasion.

During Tuesday’s call, invited guests were given an opportunity to address Yellen and her senior staff. In his statement, the Stated Clerk of the General Assembly of the PC(USA) said the yearlong pandemic has deeply hurt the most vulnerable and deepened inequality in the U.S. and abroad.

“One of the key issues in preventing the crisis is greater transparency in the financial system. This relates to debt, tax and anti-corruption policies. The Presbyterian Church and most of the other groups on this call worked hard in recent years to pass Jubilee's Corporate Transparency Act,” said Nelson. “As you know, this shines a light on anonymous shell companies and who really owns them. Some of these companies facilitate human trafficking, debt relief theft and development aid theft, tax evasion and Medicaid fraud.”

Jubilee officials estimate that developing countries lose $1 trillion a year due to illegal practices such as corruption and tax evasion. The group also says that “shell corporations” hide the identities of their owners for tax evasion purposes as well as participate in human trafficking and the exploitation of poor communities.

“Global inequality is a large and growing problem. Low-income countries are facing poverty and an increased debt burden. Many governments lack the resources to pay for vaccines and support those hit by this economic crisis,” said Yellen. “We are committed to addressing global inequality and work with our partners to tackle this crisis.”

Yellen says the current administration has already started to provide support for low-income countries through such initiatives as debt service suspension and a multilateral framework for debt treatment.

Yellen, who was sworn in Jan. 26 in as the 78th secretary of the U.S. Treasury, is the first person in American history to have led the White House Council of Economic Advisors, the Federal Reserve and the Treasury Department.