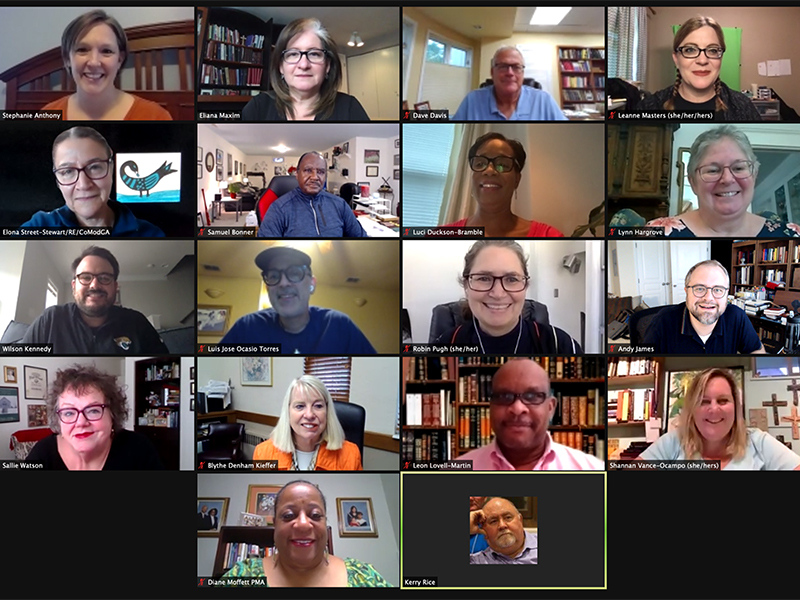 The 225th General Assembly of the Presbyterian Church (U.S.A.) is still more than a year away, but plans are well under way for the denomination’s hybrid gathering. The Committee on the Office of the General Assembly (COGA) is knee-deep into working on how to combine in-person committee meetings with online plenaries and how to conduct those at the Church’s Louisville office.

Four working groups are dividing up the details of how the gathering will take place. On Thursday, the Design work group presented a proposed docket for GA225. Under the first draft:

“Now begins a month of feedback. We’ll make sure the draft docket is circulated to the Church for consideration,” said COGA Moderator Stephanie Anthony. “There will be mid council consultations that the Design team is scheduling to get specific feedback from that audience. We also want other partners to give us feedback on how the structure will help us accomplish our work.”

Anthony said the conversations around the Hands and Feet initiative are still at a high level and the Rev. Dr. J. Herbert Nelson, II, Stated Clerk of the General Assembly of the PC(USA), says community action will be “very different” at the next Assembly.

“I think it is vitally important that we take seriously not just what we do at Assembly but how we help people go back to their congregations and look significantly at the context in which we are living,” he said. “This is how to extend Assembly beyond Assembly — people taking something back home and committing to something a lot deeper than what we’ve seen in recent years. It’s about the community and how church can have serious impact.”

The Communications work group reported on efforts currently under way to keep the greater Church informed on the plans for GA as well as the Stated Clerk’s vision for the Church in the 21st century, including a monthly newsletter, “On the Road to GA,” as well as a new webpage, Vision for the 21st Century Church. Nelson is also recording videos for virtual church gatherings that explain his vision in hopes of inspiring churches to get involved.

“We do much of this at a risk because change has a way of helping realize that we don’t always have the answers,” he said. “As we think through these days, we need to think about what it means to go into this work. We are doing this for future generations of Presbyterians as others have done for us.”

The Events work group has met with leadership from all PC(USA) agencies and entities in the past few weeks to share the Stated Clerk’s vision as well as goals for General Assembly.

“A consistent theme was grief for the loss of the large gathering and that access to commissioners, mid council leaders and members of congregations from the host city,” the team report reads. “However, the conversations took a strong turn toward the possible benefits to the new model and creative ways the agencies can engage and assist.”

The Process and Discernment working group has made three proposals for COGA consideration. The first calls for pre-General Assembly community building and learning opportunities. The goal is to provide virtual spaces and opportunities for commissioners and advisory delegates to develop relationships, build trust and deepen the understanding of items before the Assembly.

COGA will take up recommendations at its spring meeting April 13–16.

COGA also heard on Thursday the initial plans to renovate portions of the Presbyterian Center in Louisville. Phase one of the plan would create four distinct conference spaces that will allow the Church to host committee meetings in Louisville, as well as create a new production studio to support those meetings.

“Several hotels that were recently built near the Center do not have much meeting space and we’ve had initial conversations with those hotels to see if they would like to collaborate on referring groups to us for meeting space,” said Kerry Rice, Deputy Stated Clerk. “We know there are implications, so we are looking into that. It does provide exciting potential for us to develop this space, not only for our needs but also to serve the community.”

COVID-19 has forced the Church to re-think office space as more and more people are working from home. Rice says the long-term hope is to create additional space in the building for mission use or for other tenants.