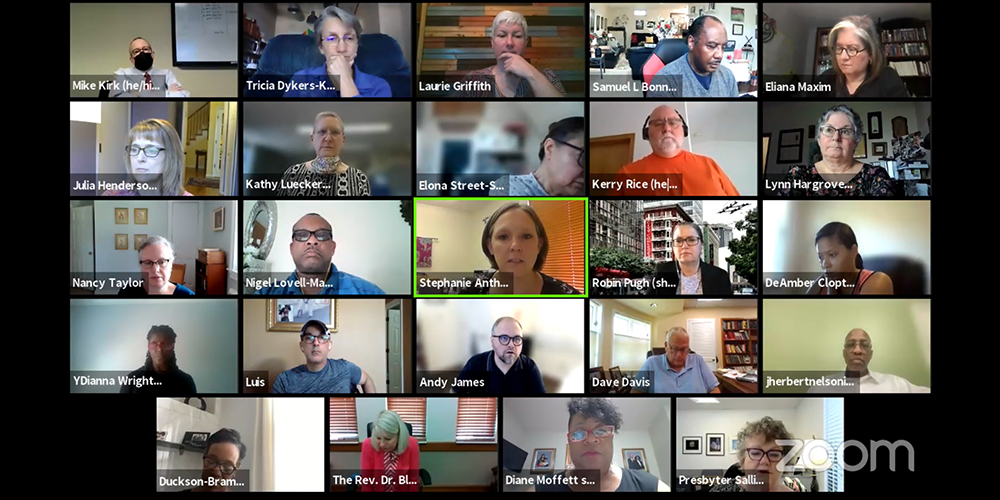 While the 225th General Assembly of the Presbyterian Church (U.S.A.) is still over a year away, members of the Committee on the Office of the General Assembly (COGA) have been looking ahead to what might be in store when the Assembly gathers again in 2024.

The COVID-19 pandemic forced the Assembly to be held totally online last year with only critical business being discussed. A hybrid gathering is now planned next year at the Presbyterian Center in Louisville with a mix of in-person committee meetings and online plenaries between June 17 and July 9.

Salt Lake City is the site for the 226th General Assembly, and a number of hotel and convention center contracts have been signed.

“We are not making any changes to commitments we already have. We don’t recommend pulling contracts or making any location changes to the 226th General Assembly, but we continue on a path of exploration and transition,” said Teaching Elder Stephanie Anthony, COGA moderator. “We will engage with commissioners at the 225th General Assembly on what the Assembly looks like and how it fits in the way we discern God’s plan for the Church. The decision is in the hands of the commissioners.”

The Rev. Dr. J. Herbert Nelson, II, Stated Clerk of the General Assembly of the PC(USA), has asked COGA over the past 12 months to rethink what future Assemblies would look like. One of the driving forces has been shrinking per capita dollars that has forced OGA to look at cost-saving measures as it relates to convention-style Assemblies.

Nelson has also called for a change in the way the Church conducts business, and he wants to create more community at the gatherings.

“How do we pause for a moment and work with one another in different ways at General Assembly?” Nelson asked. “We are going to have to work through some of these things and come out of this with a commitment to one another. We need to get away from this left, right, middle categorization of members that has turned us into a political machine of the Church.”

Teaching Elder Eliana Maxim says she is appreciative of the opportunity to hit the “pause button” at this time.

“This not only allows us to focus on the 225th Assembly and how we are planning for that but recognize that we are still reacting to a pandemic and changing circumstances and we’ll have to deal with a whole new set of realities,” she said. “I appreciate slowing down the bus and taking a breather to figure out that we have to handle what’s right in front of us, recognizing that circumstances are bound to change.”

COGA also approved a document mapping out the expectations of commissioners and advisory delegates taking part in next year’s Assembly.

According to the document that will be distributed in the coming days to presbyteries, committee assignments and travel dates to Louisville are expected to be announced around the end of February 2022. Elected commissioners and advisory delegates should also:

“I think it is important for all of us in presbytery positions to start doing this work super early. I realize that if I want qualified folks to stand for election as commissioner, we need to do it now,” said Maxim. “There is a lot of additional work, significant recruiting and training we’ll have to do.”

COGA has four smaller teams working on various aspects of next year’s Assembly. The Events Team reports that it will have future recommendations once there is more information and decisions around renovation work at the Presbyterian Center.

“We’ve had good conversations with Mid-Kentucky Presbytery about developing host teams when committees are in session, not the traditional hosting at airports and welcome areas at hotels, but assisting staff,” said Teaching Elder Dave Davis with the Events Team. “We expect to appoint a worship team soon to work with the Co-Moderators and we’ll also be looking at plans for Hands and Feet as well.”

The Communications Team reports that it is looking for as many ways as possible to update the Church on Assembly plans.