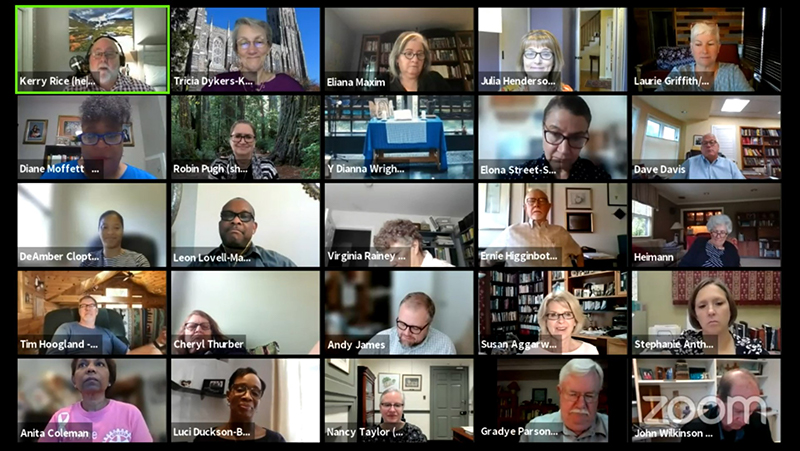 The Committee on the Office of the General Assembly (COGA) began the second day of its fall meeting Tuesday with an update on the recently released consultant's report proposing major changes for the Presbyterian Mission Agency. For more than 18 months, PMA staff have been working on a Vision Implementation Process. The end goal, say PMA leaders, is to help the denomination carry out its Matthew 25 invitation, allowing it to better serve a church in transition.

CounterStories Consulting LLC produced the 75-page report. The Rev. Shannan Vance-Ocampo, the PMA Board’s chair-elect, told COGA on Tuesday that it will be up to agency leaders to “Presbyterianize” it and will begin that process when the full PMA Board takes it up at next week’s fall meeting (Oct. 6–7).

“We envision a lot of collaboration and conversations with others across the PC(USA). PMA leaders have been meeting with other agency heads getting constant feedback about the process,” she said. “We’ve invited chairs and co-chairs of all agencies and entities because we want to hear the feedback and start those conversations.”

The Rev. Dr. Diane Moffett, the PMA’s president and executive director, says all of the work that has gone into this process is a direct result of past General Assembly action.

“We are always following the work plan that the Assembly approved,” she said. “We try to determine by spirit what is happening with one ear to God and one ear to God’s people, so we won’t be way over here when the Assembly is someplace else.”

“We are two weeks into having this report in our hands. We have a board meeting next week, in February, and a final one before the Assembly,” said Vance-Ocampo. “We don’t have all of the answers today; we’re still early in the process but we are committed to working diligently and responsibly toward Assembly.”

The Rev. Dr. J. Herbert Nelson, II, Stated Clerk of the General Assembly of the PC(USA), who has been speaking about reform across the denomination for over a year now, says the road won’t be easy for the mission agency.

“Be ready to fall and then get back up. Plans on paper are great, but the world doesn’t depend on paper these days. It’s a daring experience, so try not to allow this to discourage you. There will be stumbling blocks because of brokenness and pain,” he said. “It takes an extra amount of courage to shift and change a 400-year-old institution and bring it into the 21st century.”

The entire report can be read here.

COGA also spent a portion of Tuesday’s meeting with the Presbyterian Historical Society Board. The last time the two groups met together was at the PHS offices in Philadelphia in spring 2019.

PHS Executive Director Nancy Taylor reported that despite the COVID-19 pandemic, the Historical Society has been able to keep projects on track.

“Through hard work and despite continuing challenges of the last year, we’ve been able to succeed [with our] goals and move the organization forward,” she said. “Our social justice work has grown exponentially both in resources and concept communications with the larger church.”

Taylor talked of the increased collaboration between OGA and PHS and believes both have benefited from it.

“We see each other as one agency with particular emphases on mission and that has been very important,” said Kerry Rice, OGA’s Deputy Stated Clerk. “All of OGA staff have shown remarkable resilience through the pandemic. It’s amazing to see things moving while we try to figure out how our work lives are ordered.”

The open session concluded with budget talk. DeAmber Clopton, OGA’s associate director for Finance Administration, reported that revenue so far this year is slightly below where the agency was last year; however, she adds the budget has recognized some savings in travel and meeting expenses due to the COVID-19 pandemic.

Rice also provided an update on projected expenses for the 225th General Assembly next year, adding that it will cost a little more than originally thought, specifically around expenses for commissioners and advisory delegates.

“We have no idea what will be required and whether we will need rapid tests for all participants. What will we need to do to make sure we are covering our bases?” he asked. “What if there is an outbreak during the Assembly and we’re required to quarantine participants? That’s a much bigger expense than we anticipated and may result in quarantining them in rooms for a significant amount of time.”

OGA anticipates the technology costs for General Assembly will come in just under $220,000. However, costs will be offset in part by more than $163,000 in income from this year’s PC-Biz license fees and service agreements.

“We are learning that we will need to spend money to make the technology work more cohesively and make it more effective,” said Rice. “The good news is that some of this will be offset by money earned by providing this service to other organizations.”

Another question surrounds the final expenses for building renovation at the Presbyterian Center. OGA’s costs related to the construction of first-floor meeting space and a production studio is expected to come in less than the projected $385,000 estimate from a year ago. The overall projected budget is $2.4 million.

“Most funds for the final expenses will come from the Administrative Services Group through the forgiven PPP (Paycheck Protection Program) loan and through the capital budget,” said Rice. “There will be some expenses charged to OGA, especially around studio costs and equipment, but all of that will come from reserves.”

Rice says they view those as investment costs, not just for the 225th General Assembly.