Home News Howard Baskerville and the call of freedom

Howard Baskerville and the call of freedom 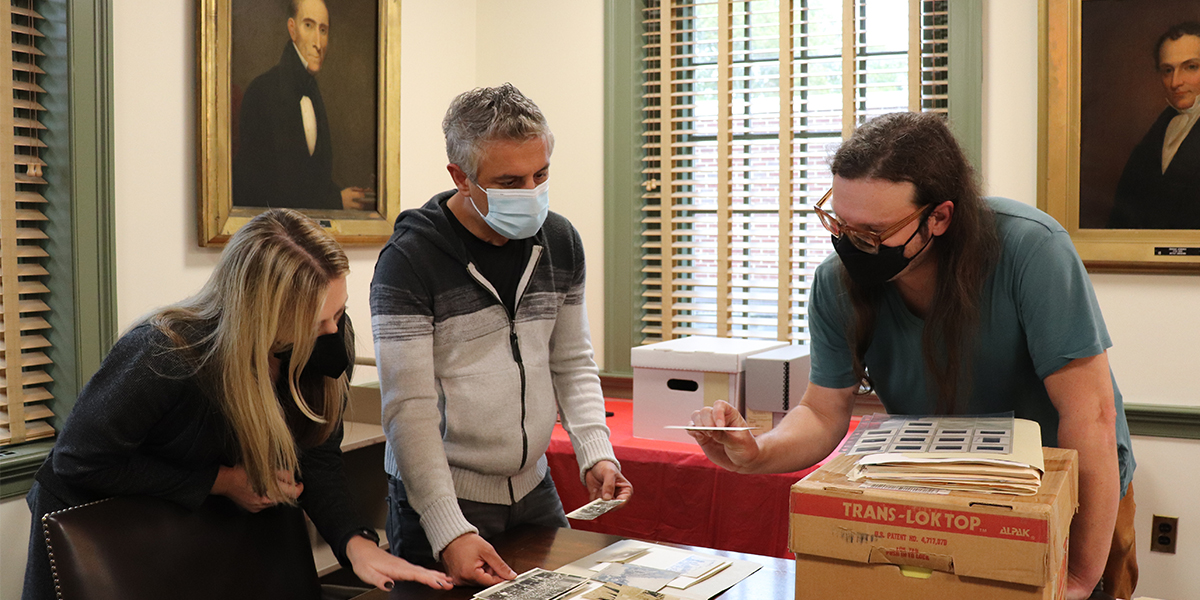 If that sequence sounds reversed — accessing source materials after publishing a book — consider the prolonged closures of the pandemic and the saving grace of virtuality. Although Covid prevented Aslan from visiting PHS earlier, the society’s digitization program gave him remote access to documents that revealed details of background and motivation about his enthralling subject. A sample of those items can be viewed in Pearl, the Society’s digital archives.

Aslan rounded a table covered with collection materials, talking about Presbyterian Board of Foreign Mission leaders such as Robert Speer and Henry Harris Jessup — figures who shaped the church’s mission program over a century ago or Baskerville’s short career. Aslan made his own smart phone scans of materials, including a recommendation for Baskerville penned by Princeton University professor Woodrow Wilson. Aslan noted that the future President’s racism toward Black Americans stood in stark contrast to his support for democratic movements around the world, a support that influenced the young Baskerville and traveled with him overseas.

In 1907 the Nebraska native arrived in the city of Tabriz, where he failed to convert many Muslims to Christianity but grew close to students at the American Memorial School, where he taught history. He was fighting alongside those same students in 1909, and trying to break a prolonged siege of the city, when he was shot dead by forces aligned with Shah Mohammad Ali. 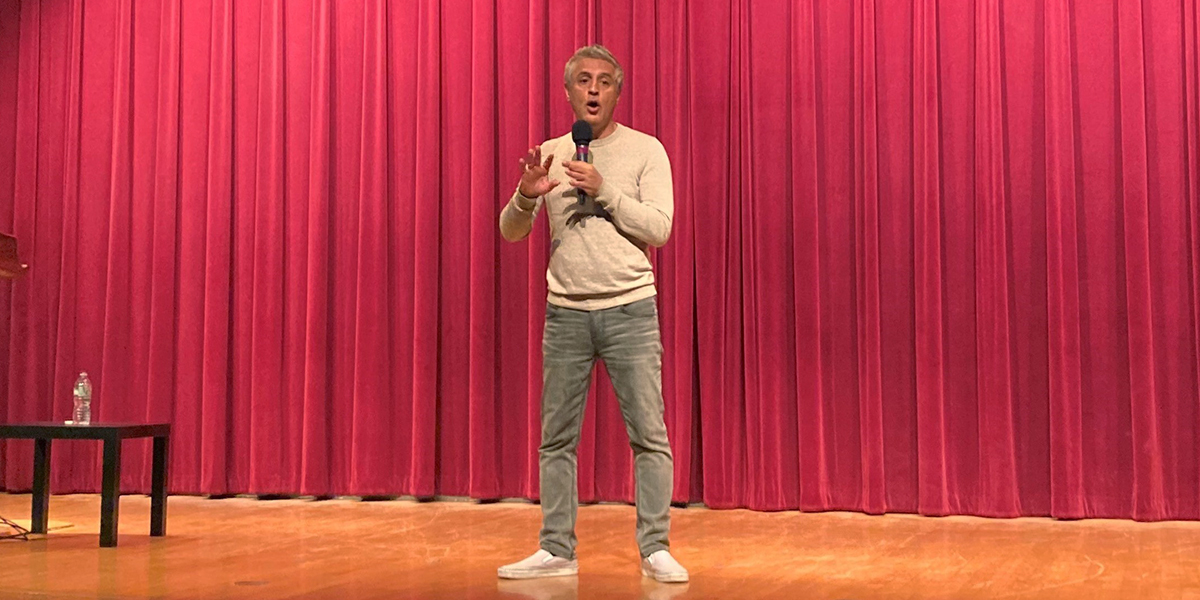 Reza Aslan at the Free Library of Philadelphia. Photo by Fred Tangeman.

During a Thursday night talk at the Free Library of Philadelphia, Aslan compared the Constitutional Revolution of 1909 to the current wave of protests against Iran’s rulers and domestic security apparatus. School girls have led many of the demonstrations, which began in response to the government’s killing of Mahsa Aminia, a young Kurdish women.

“[Shah] Mohammad Ali was one of the worst rulers in Iranian history,” Aslan said at the Free. The authoritarian leaders of today’s republic are similarly ruthless when it comes to silencing public support for democratic reforms or enforcing morality laws.

Oil merchants going on strike in the past week is a sign of the protests’ growing popularity, Aslan said. “To see people in the thousands coming out all over the country is truly amazing. What is happening now in Iran is unprecedented in the 21st century” —surpassing even the widespread protests of 2009.

Aslan grew up in Iran, where monuments hinted at Baskerville’s status as a martyr for the cause of Iranian democracy. “His death was easy for the Shiite population to understand as an act of religious self-sacrifice,” Aslan said.

Baskerville involved himself in the struggle for an Iranian constitution and parliament despite warnings by the Board of Foreign Missions and the U.S. State Department not to. “The U.S. government threatened Baskerville with treason, so he gave up his passport,” Aslan said.

Since the Iranian Revolution of 1979, Baskerville has nearly vanished from the Iranian consciousness, Aslan explained. Baskerville was never well known in the United States, where the U.S. government and Presbyterian church leaders ignored his story, wary of the ways mission can complicate foreign affairs, and vice-versa.

“It is my own call to make sure Baskerville’s name is resurrected,” Aslan told the library audience. “He represents so much of what is happening now — not just protests in Iran, but our obligation as Americans to bring awareness of democracy efforts wherever they are taking place around the world.”

Aslan praised PHS for preserving so many documents, photographs and artifacts about mission history. After his talk he dedicated a copy of his book to the society, thanking it for its work keeping “history alive.” 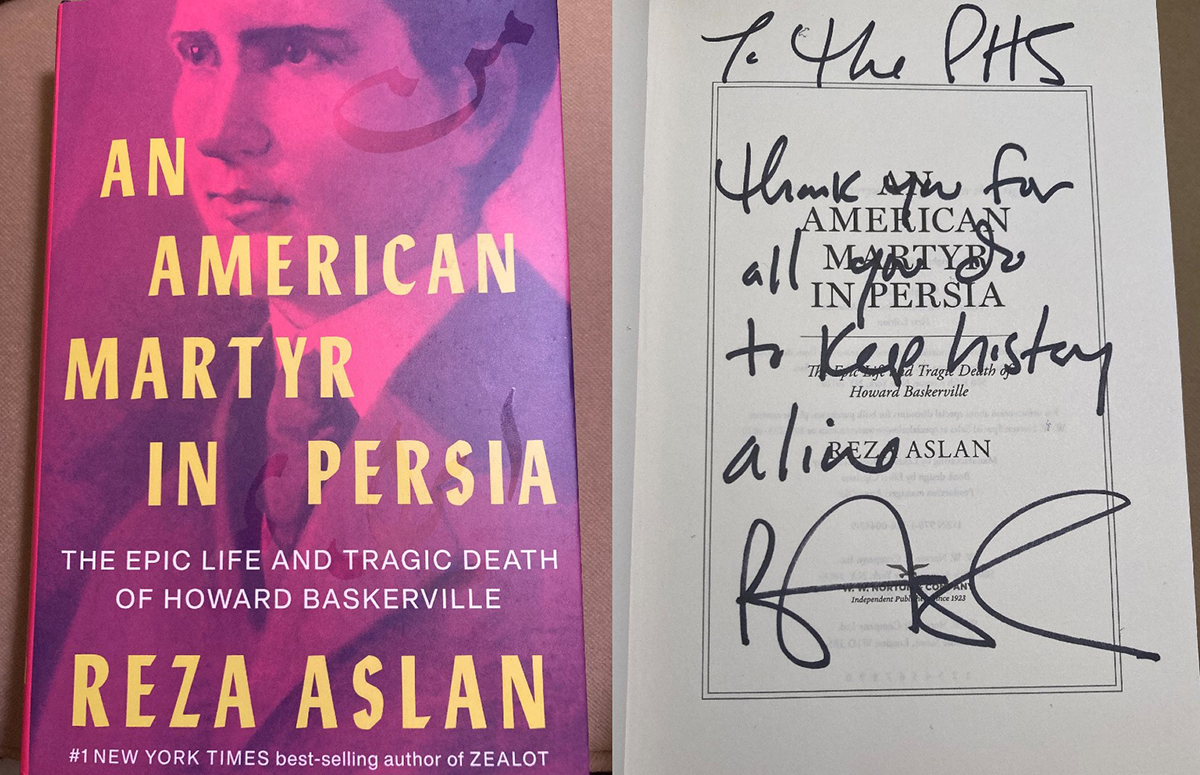 You can see Aslan speak about “An American Martyr in Persia: The Epic Life and Tragic Death of Howard Baskerville” during the remaining dates of his book tour. Presbyterian groups wishing to hold conversations about Baskerville are encouraged to contact Aslan directly.