‘People don’t always realize the influence they can have’ 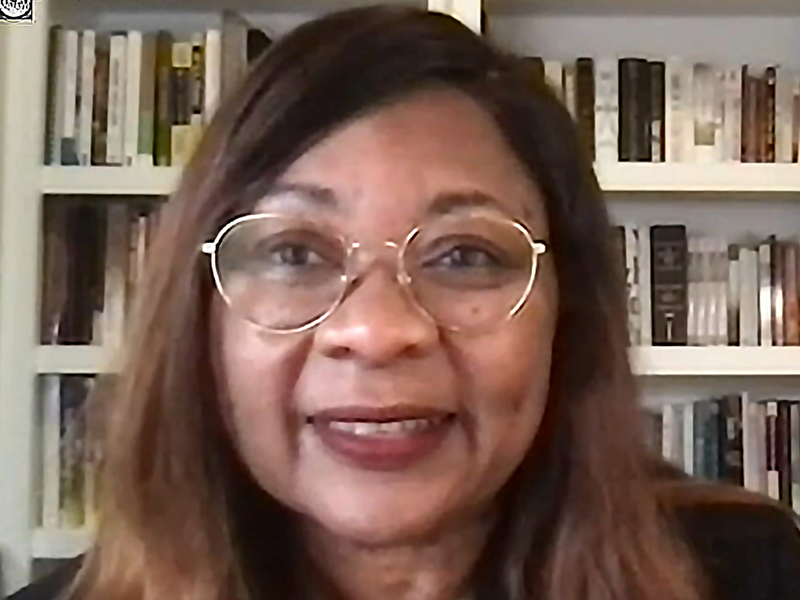 Catherine Coleman Flowers speaks with the Co-Moderators of the 224th General Assembly during "Good Medicine" on March 9, 2022.

Catherine Coleman Flowers speaks with the Co-Moderators of the 224th General Assembly during "Good Medicine" on March 9, 2022.

“If we don’t change the way we do things, we’re making sure the generations to come are going to have no life or a very hard life. They will not be refugees from war; they will be refugees from the planet,” Catherine Coleman Flowers said during the March broadcast of “Good Medicine,” hosted by the Rev. Gregory Bentley and Ruling Elder Elona Street-Stewart, Co-Moderators of the 224th General Assembly (2020).

Flowers is an environmental health advocate and the founding director of the Center for Rural Enterprise and Environmental Justice. She is also the rural development manager for the Equal Justice Initiative, a member of the board of directors of the Climate Reality Project and the Natural Resources Defense Council, and a senior fellow for the Center for Earth Ethics at Union Theological Seminary. She is widely published, including her first book, “Waste: One Woman’s Fight Against America’s Dirty Secret,” which will be released in paperback on March 29. In 2020, Flowers was awarded a MacArthur Fellowship, commonly known as the “Genius Grant.”

She grew up in Lowndes County, Alabama, which is along the route of the historic civil rights march from Selma to Montgomery and where the Black Panther Party had its origin. She grew up inspired by her activist, problem-solving parents and others who “understood their responsibility not only to their faith but also to their communities.”

Today, the residents of Lowndes County are contending with a desperate lack of access to adequate wastewater systems, causing sewage to back up into their homes and yards.

This legacy has heightened her commitment to justice issues related to environmental health. The discussion kicked off with an examination of the sad fact that situations like inadequate sanitation in Lowndes County and contaminated drinking water in Flint, Michigan, among many others, have persisted for generations.

These conditions are “baked” into a system that’s built around slavery, colonization, exploitation and extraction, said Flowers. “I still believe the Constitution is probably one of the best documents about democracy … but I would challenge us to make sure it applies to all of us, and these systems were not designed to be available to all of us. And now it’s even worse because it’s not just a race thing — it’s also a class thing.

“There are people who just don’t care about humanity; they only care about money. They don’t even care about their own children and grandchildren’s future. We’ve created a system to uphold the type of economies that have historically taken from folk instead of sharing. I think it’s just another way of taking people’s land and gentrification because a lot of times they move people out … only to improve the situation and take it and make more money off of it.”

Climate change is now compounding these problems, she said, adding that although there are many who are in denial about it, there are also many “who also just may not realize how it will impact them.”

Flowers believes in enlisting the power of storytelling, noting that as social media is used to push out disinformation, it also needs to be used to “tell the truth.” She said if she hadn’t seen Standing Rock (site of the controversial Dakota Pipeline) for herself, she wouldn’t have realized how intentional the location is, “with no regard to destroying the drinking water source for so many people.”

“There are numerous ways in which we have to tell these stories time and again,” she said, pointing out that she believes the reason Christianity has “lasted so long is because we told the stories.”

Sometimes people see things a bit differently if they understand the impact our actions today will have on their grandchildren in the future, she said. The outlook is grim “if you can’t get access to water because the aquifers are dried up where we’ve fracked them out of existence, or if people don’t have access to clean air, or we have sea level rise that’s causing flooding. We’ve turned Earth into a big garbage can. It cannot survive that way, and we can’t survive that way. We have to change our consumption.”

She mentioned just a few examples of massive environmental impact, such as the carbon footprint of cruises, landfills filling up with old cellphones when “you buy a new one every two years,” and practices such as mountaintop removal mining in West Virginia.

Flowers said that it’s especially important to help people of color remember and engage with their legacies because “a lot of times people leave the reservation or the rural communities and they forget where they came from, and they forget that we still have relatives there,” she said. “We have to connect those dots for them.”

She recalled a visit to “Cancer Alley,” an 85-mile industrial area along the Mississippi River in southern Louisiana, with retired Army Lt. Gen. Russel Honoré. She said Honoré noted that “we probably all have something in our homes that got its origins here.”

“This makes connections about how we are inadvertently supporting some of this. We need to help people understand how to make better choices. People need to start paying attention in their own backyards,” she said.

Flowers said environmental justice issues can be overwhelming and leave people feeling helpless. She suggested several actions: march for voting rights, register to vote, write editorials for newspapers, pay property taxes to hold on to your property, and go home and see what’s happening there, all things that can be done collectively to bring about changes. She said people “don’t always realize the influence they can have.”

Although Flowers no longer lives or votes in Lowndes County, it is still close to her heart and she uses her influence as a tireless advocate to “bring about change in the local community and take care of the Earth,” including participating in a historic event in early March as part of the commemoration of the 57th anniversary of Bloody Sunday and the Selma to Montgomery March.

Michael S. Regan, the first Black administrator of the Environmental Protection Agency, visited Lowndes County and met local citizens of all ages who showed him examples of the deficient sanitation systems. “It was a very touching experience for the community,” said Flowers. “I’ve been doing this work for more than 20 years, and this is the first time we’ve ever had people from the executive level of government in the U.S. go to this community to see what is happening. And the message we also delivered to them is that this is not the only community.”

She anticipates there will soon be a historic announcement saying that money from the federal infrastructure bill will be used to address sanitation issues not only in Alabama but in other Indigenous communities as well.

Flowers said Regan was moved by what he saw and shared his impressions with Transportation Secretary Pete Buttigieg on the plane back to Washington. Buttigieg tweeted about their conversation.

“Who would have thought that there was this poor place along the Selma to Montgomery march trail in the Black Belt that is the home of the original Black Panther Party that fought for the right to vote years ago and … is now working to bring sanitation equity not just along the Black Belt but throughout the country. That’s what is significant about the role that local people are playing,” Flowers said.

Bentley agreed that progress in addressing inequities doesn’t occur “without grassroots people continually hammering at the structures of oppression and segregation and continually demanding justice until it swells up.” He also credited Flowers herself, saying “we don’t get Michael Regan ready to do significant action on this or Pete Buttigieg tweeting out unless there’s a Catherine Flowers, and she is not here unless we have the everyday people of Lowndes County pushing and shaping and molding her to continue this work. We need a cadre of people on the ground who are willing to push them to do the right thing.”

To see and hear the entire broadcast, click here. “Good Medicine” is presented live on the second Wednesday of the month at 2 p.m. (Eastern time) on the 224th General Assembly Co-Moderators Facebook page.