Chapter by chapter, the Rules of Discipline Committee approves a new policy for church discipline

The new document, Church Discipline, follows years of work by the Rules of Discipline Task Force 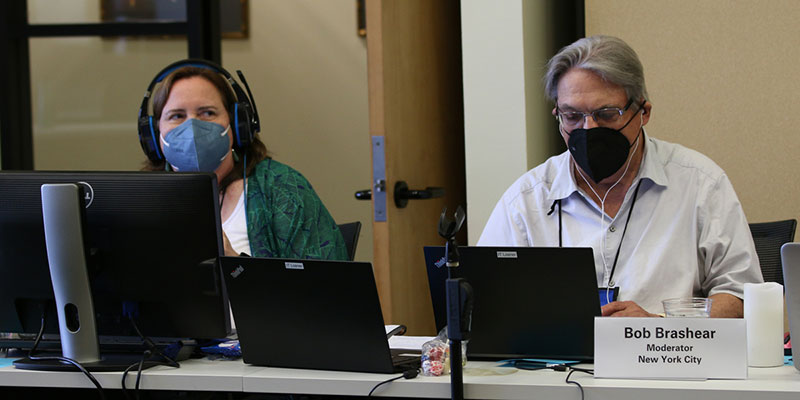 The Rev. Robert Brashear, committee moderator, at right, and the Rev. Eyde Mabanglo of Seattle Presbytery, the vice-moderator of the Rules of Discipline Committee. Photo by Rich Copley

Committee members made their way through the document, prepared by the Rules of Discipline Task Force, chapter by chapter on Tuesday, approving each chapter individually, many with amendments proposed by the Advisory Committee on the Constitution, along with a handful by committee members. The amended document can be viewed here.

Church Discipline will next be considered by all commissioners to the 225th General Assembly, who will meet virtually July 5-9.

The task force’s charge was to produce a document with simplified wording organized into sections “in a process that flows smoothly and clearly,” McRight told the committee.

Changes to Section D of the Book of Order include introducing restorative justice into the alternative resolution process. In addition, each charge against a respondent must state the specific portion of Scripture and/or the Constitution of the Presbyterian Church (U.S.A.) which is alleged to have been violated.

Under the new language, each censure would be imposed with a statement about how the censure is given “not with malice or vindictiveness but in Christian love to offer you correction in error and the possibility of full community restoration … and to restore the unity of the church by removing from it the discord and division the offense(s) have caused.”

Before helping to lead the committee through each of the 10 chapters, Committee Moderator the Rev. Robert Brashear called the document “clearly a work of compassion, but also of justice.”

The Rev. Eyde Mabanglo of Seattle Presbytery, the committee’s vice-moderator, delivered perhaps the day’s most humorous moment with this updated Serenity Prayer that any commissioner can pray. Her prayer followed a planned five-minute break that stretched into 10:

“God, grant us the serenity to accept the things we cannot change, like when PC-Biz disappears from our screens and lines are long at the bathroom; the courage to change the things we can, like our profile names on Zoom; and the wisdom to know the difference.”

After the final vote, Brashear, a New York singer-songwriter when he’s not moderating General Assembly committees, pulled out his guitar and sang his song “Rest Awhile” for those gathered both in person and online. “See how many Bible verses you can pick up,” he said.

As the committee was completing its work a day early, it fell to Mabanglo to provide the concluding prayer, which praised God, the “possibility of collective change. Though every day ordinary patterns of living disguise evil and cover over sins of power, God makes known what is hidden, calls us to courage and makes us capable of radical solidarity … Every day is an opportunity to repattern the world, the world that God so loves.”