Faces that couldn’t hide their hearts

It was the look on the faces of young people that the Rev. Jimmie Hawkins remembers best from the march to end cash bail held in St. Louis during the 223rd General Assembly (2018).

“We marched from the convention center to the detention center,” Hawkins recalled on Wednesday for Fred Tangeman, host of GA Live, a half-hour conversation that can be heard here. Young people were “ecstatic” that the Presbyterian Church (U.S.A.) was taking a visible and meaningful step during a march that raised more than $47,000. “Participants still talk about that General Assembly,” Hawkins said.

Tangeman, too, remembers “looking through big windows [at the convention center] and seeing masses of Presbyterians walking together with a sense of calling to that cause,” he said. It’s a cause that’s being reprised online during the current Assembly at 6 p.m. Eastern Time on July 7 with a panel discussion as part of the Hands and Feet initiative. Learn more here.

Hawkins directs advocacy efforts for the PC(USA) at the Office of Public Witness and the Presbyterian Ministry at the United Nations. During the 225th General Assembly, he’s serving as a resource to GA committees discerning proposed overtures on preventing gun violence and on strengthening race and gender justice. Tangeman noted the Assembly’s Addressing Violence in the USA Committee will be addressing gun violence, a topic that is far too often in the headlines — and sadly so commonplace that it often doesn’t make the evening news.

“This has been an ongoing issue for justice in the life of the Church,” Hawkins said. When he speaks to congregations and mid councils, Presbyterians tell him they’ve studied “Gun Violence, Gospel Values: Mobilizing in Response to God’s Call,” recently updated after being approved by the 219th General Assembly (2010). Even though it’s a 12-year-old policy of the General Assembly, “it’s very timely right now,” Hawkins said, given that a bipartisan group of U.S. senators reached agreement last week on legislation narrowly focused on preventing future mass shootings, such as last month’s school shooting in Uvalde, Texas. The senators’ agreement, Hawkins said, includes background checks, red flag law proposals, and more funding for mental health services and improved school security.

“That’s happening right now,” Hawkins said. “I think it’s providential that the Presbyterian Church is determined to do everything it can to decrease gun violence. We have advocated for more than a decade and it’s still at the forefront of people’s minds.”

Hawkins told Tangeman he attended the March for Our Lives June 11 in the nation’s capital with his 18-year-old daughter. “It’s an indictment of where we are as a nation that our young people have to lead the way,” Hawkins said, noting the impetus for holding the march came from young people who survived the Sherman Douglas High School  shooting in Parkland, Florida, four years ago. “This is a reality no one should have to face.”

Long known for studying issues long and hard before forming policy at General Assembly, Presbyterians “come to general agreement on our path forward, and I believe there is something powerful in that,” Hawkins said. “We trust the Spirit will move in our gathering.” 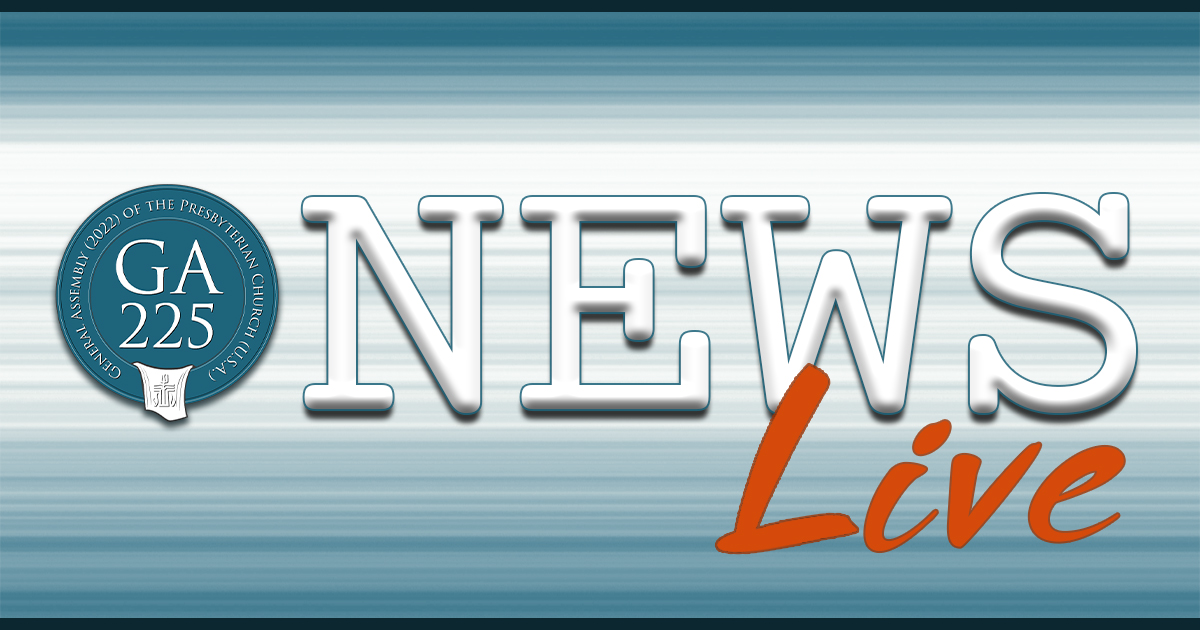 GA policy is built on both biblical and theological foundations, Hawkins noted. “Other denominations call me and ask if they can share our statements. I push [GA policy statements] because congregations need to study them … We look at how the Bible informs us and how tradition has informed us. Once our minds are made up, we stick with it.”

While Presbyterians are “across the board” politically and even theologically, “what comes out of the General Assembly are thoughtful decisions,” Hawkins said. “I think commissioners learn and come out of it better informed.”

As he was researching his recently published book, “Unbroken and Unbowed,” Hawkins said he was struck by the variety of ways people can register their protest. Options range from marching in the streets to donating to organizations and causes that work to bring about God’s kin-dom on Earth. Most Presbyterians believe God “is a God of love and of justice, and you can’t read the Bible without talking about justice,” he said. One indication: “The prophets take up the last one-third of the Old Testament.”

From a faith perspective, advocacy is a form of discipleship, he said. “People are starting to see advocacy as part of their Christian walk,” Hawkins said. People who were once solidly against “bringing politics into the church” now tell him they “feel the Spirit moving me to find out ways I can make a difference.”

Hawkins also discussed his involvement with the Poor People’s Campaign, co-founded by another Presbyterian pastor, the Rev. Dr. Liz Theoharis, as well as Bishop William Barber II. That organization held its Moral March on Washington and to the Polls last weekend.

“There’s a lot of synergy between the justice issues of the Presbyterian Church and the Poor People’s Campaign,” Hawkins said. “The PPC has given a strong push to getting people to use their voices … It’s a call to take a look at what’s going on in your local community.”

“Charity and advocacy — to me they are two sides of the same coin,” Hawkins said.