Special committee would consult with Stated Clerk, six agencies and others to better enable GA work 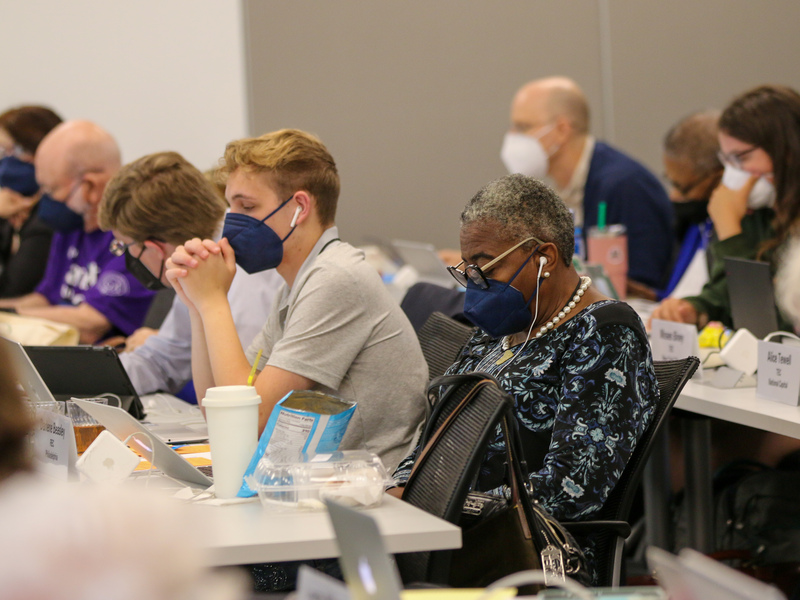 Ruling Elder Commissioner Darlene Beasley listens during the Committee on Standing Rules meeting on June 27, 2022 at the 225th General Assembly of the Presbyterian Church (U.S.A.) in Louisville, Kentucky. (Photo by Randy Hobson)

The financial implications are expected to be nearly $30,000 over the years 2023-24. The proposal, STAN-36, came to the committee from the Committee on the Office of the General Assembly.

Provided the item is approved next week in plenary, the Co-Moderators of the 225th General Assembly, the Rev. Shavon Starling-Louis and the Rev. Ruth Santana-Grace, will appoint the nine-member committee, which will be charged with proposing a new set of Standing Rules. Among the special committee’s considerations will be:

“You’ve spent time over the last two days getting to know these [Standing] rules, why they work and why they don’t work,” the Rev. Andy James from COGA told the committee. “We believe this proposal is the right step at the right time so the next General Assembly can more effectively and broadly reflect the will of God through the Presbyterian Church (U.S.A.).”

According to the item’s rationale, the proposed special committee won’t have to start from scratch “because any number of groups have proposed various changes to these processes in recent years.”

The committee approved three other items for consideration by the entire assembly next week. All three came from COGA.

STAN-11, regarding worship planning, adds the General Assembly Committee on Representation to the list that GA co-moderators must consult while planning worship for the upcoming assembly.

STAN-09, regarding the Stated Clerk Nomination Committee, also adds GACOR to the consultation process for selecting the nominee to be the Stated Clerk of the General Assembly of the PC(USA).

As committee members prepared for closing worship, Moderator the Rev. Jennifer Jennings of East Iowa Presbytery thanked them for “the attention and cooperation and collegiality you have shown as brothers and sisters in Christ.” She encouraged committee members to prepare and practice for strict time limits on speaking enforced during plenary, which runs from July 5-9.

“Brevity,” Jennings said, “is what we’re going for in the plenary.”