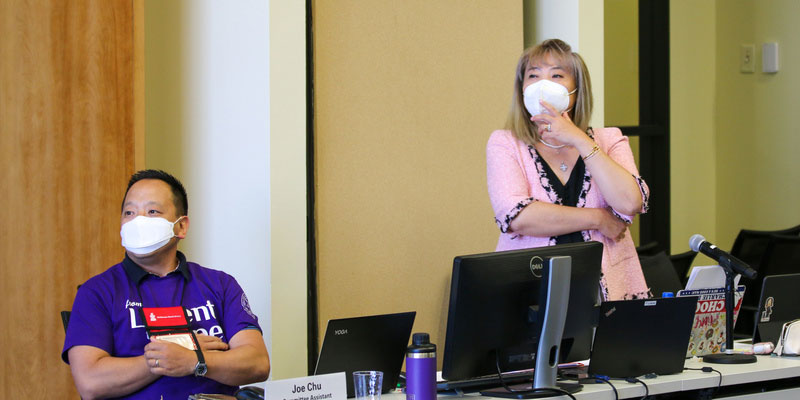 Committee assistant Joe Chu (left) and moderator Frances Lin (right) of the Presbytery of San Diego watch presentations from small groups during the Committee on Ecumenical and Interfaith Engagement meeting on June 27, 2022, at the 225th General Assembly of the Presbyterian Church (U.S.A.) in Louisville, Kentucky. (Photo by Randy Hobson)

Committee assistant Joe Chu (left) and moderator Frances Lin (right) of the Presbytery of San Diego watch presentations from small groups during the Committee on Ecumenical and Interfaith Engagement meeting on June 27, 2022, at the 225th General Assembly of the Presbyterian Church (U.S.A.) in Louisville, Kentucky. (Photo by Randy Hobson)

The Ecumenical and Interfaith Engagement Committee started its final day of work at the 225th General Assembly of the Presbyterian Church (U.S.A.) with two related overtures to consider. But parliamentary procedure wasn’t going to let the committee get away easy.

The items of business at hand were ECU-02, which called on several entities of the PC(USA) to explore a global covenant agreement to use as a formula for establishing relationships with other denominations, and ECU-03, which called for the PC(USA) to establish a memorandum of understanding with the Evangelical Presbyterian Church, Ghana.

Even before committee members gathered in Louisville, there was discussion about the possibility or answering the Ghanaian overture with the formula for relationships item, though it wasn’t as easy as it sounded.

Both overtures were referrals from the pandemic-shortened 224th General Assembly in 2020 and were the results of discussions that had been going on for years.

The Rev. Dr. Robert Foltz-Morrison of the Presbytery of New York City presented the Ghanaian overture, which the presbytery sponsored. He said ECU-03 was the result of decades of relationships between Presbyterian congregations and presbyteries in the United States and Ghana through the Ghana Mission Network. Conversations came to fruition at the Big Tent gathering in Baltimore in 2019 with the proposal to bring the issue of a memorandum of understanding to General Assembly.

Foltz-Morrison said the structure was needed because of a quickly growing Evangelical Presbyterian Church, Ghana community in the United States across eight states that finds homes away from home in PC(USA) church buildings and congregations.

And they are not alone.

The other overture, ECU-02, was the result of discussions about creating a covenant relationship with the Gereja Masehi Injili di Minahasa (the Christian Evangelical Church in Minahasa), founded in the Indonesian province of North Sulawesi, and recognition that similar conversations are happening all over the PC(USA).

“This is a reflection of the world we live in, where churches, like many other things, are increasingly globalized,” said the Rev. Philip Woods, associate director for strategy, program and recruitment for Presbyterian World Mission and a resource person for both overtures.

Woods said World Mission was supportive of the Ghanaian overture but did feel it could be answered by the broader overture.

The committee concluded its time together with a worship service that ended with each member of the committee receiving a cross. Standing in a circle, they blessed their crosses and passed them to the person to their right and repeated that until everyone had a cross that had been blessed by every other person on the committee.