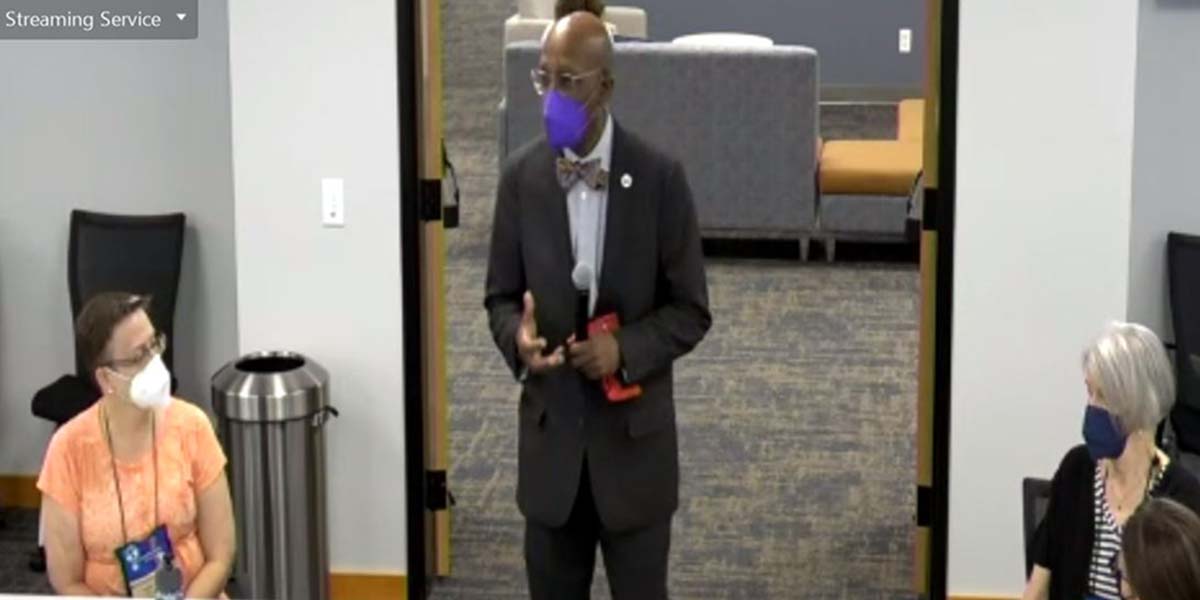 Stated Clerk of the General Assembly J. Herbert Nelson talks to the Immigration Committee on June 29, 2022, during the 225th General Assembly of the Presbyterian Church (U.S.A.) in Louisville, Kentucky.

Stated Clerk of the General Assembly J. Herbert Nelson talks to the Immigration Committee on June 29, 2022, during the 225th General Assembly of the Presbyterian Church (U.S.A.) in Louisville, Kentucky.

A day after the General Assembly’s Immigration Committee wrapped up its business, the Rev. Dr. J. Herbert Nelson, II stopped by and encouraged them to break new ground in their local congregations and “dare to be different.”

Upon your return, “have the spirit of innovation, the spirit of the power of Jesus Christ and the Holy Spirit, and even more than that, the power that has been given to each and every one of you to be disciples in this present age,” said Nelson, Stated Clerk of the General Assembly of the Presbyterian Church (U.S.A.).

Nelson’s comments came during a brief committee gathering that was mainly devoted to worship and giving committee members time to share thoughts after two days of formal business. Their Monday and Tuesday work revolved around how the church can expand its efforts to welcome and assist immigrants, refugees and asylum seekers who are trying to find a safe place for themselves and their families to thrive.

Moderator Virginia “Ginna” Bairby acknowledged the emotional strain of having to weigh complex issues, especially during a debate on Tuesday that led to the committee voting in favor of declaring the Presbyterian Church (U.S.A.) to be a “Sanctuary and Accompaniment Church.”

During that discussion on IMM-06, the fact that the church is a work in progress was apparent as committee members pondered whether to choose language that wouldn’t ruffle the feathers of people back home or decide to push the church to be more bold. Issues of race and equity intersected with the overall topic.

“Several of y’all have shared the intense emotions that came from that conversation, and I just want to honor them,” Bairby said. “Folks felt sadness, hurt, anger, grief, joy, consternation. … But I just want to say, ‘We hear you and we see you.’ This work is not easy, and sometimes it does get messy, but I so appreciate everyone who had the courage to speak truth. … That is Presbyterianism at its best, and I thank you guys for walking this journey with us.” 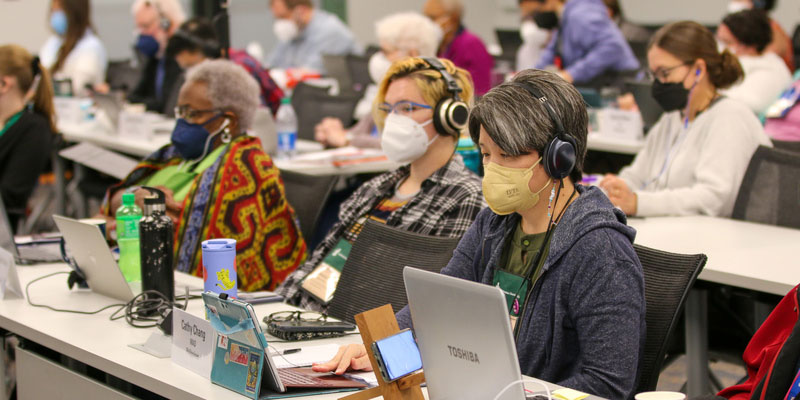 The group had Communion, took part in hymns and recitations and read from John 21:15–19, a portion of the Bible in which Jesus repeatedly asks Simon Peter whether he loves him and instructs him to care for his lambs and sheep.

During brief remarks, Nelson thanked the committee members and talked about ingredients that will be needed for the church as it goes forward.

“Innovation is going to be not just a part of what we need to do here in this particular space, but what does innovation mean when we go back to our congregations? What does it mean in a world that, quite frankly, has changed on us and that we don’t have a whole lot of control over in many ways?”

Churches are still grappling with whether people will return to services, how to keep those who are online engaged and how to surmount fears about the coronavirus and the possibility of a future pandemic.

But “we have to be willing to, yes, try and fail, get up again, find the pieces that worked, discard the ones that did not and put them on a shelf because you may need them later,” he said. “And then find our way to the space where we can re-collect, and at the same time, build bridges of hope for the contextual reality that is facing us as a church and as a people.”

Nelson went on to say that instead of being fearful, “we have to begin to explore deeper into our faith and trust that all things in this particular age of our life will work together for the good of those who love the Lord and who live according to the Lord’s purpose. To me, that is a playground of opportunity.”

He closed with a story about visiting the Presbyterian Center while renovations were underway for the General Assembly and being “a nervous wreck” about whether the project would be finished in time. He was anxious, but anxiety was declining among those who were actually doing the work.