The UPCUSA and La Causa: Cesar Chavez speaks at the 1974 General Assembly

Looking back at the origin of the National Farm Worker Ministry 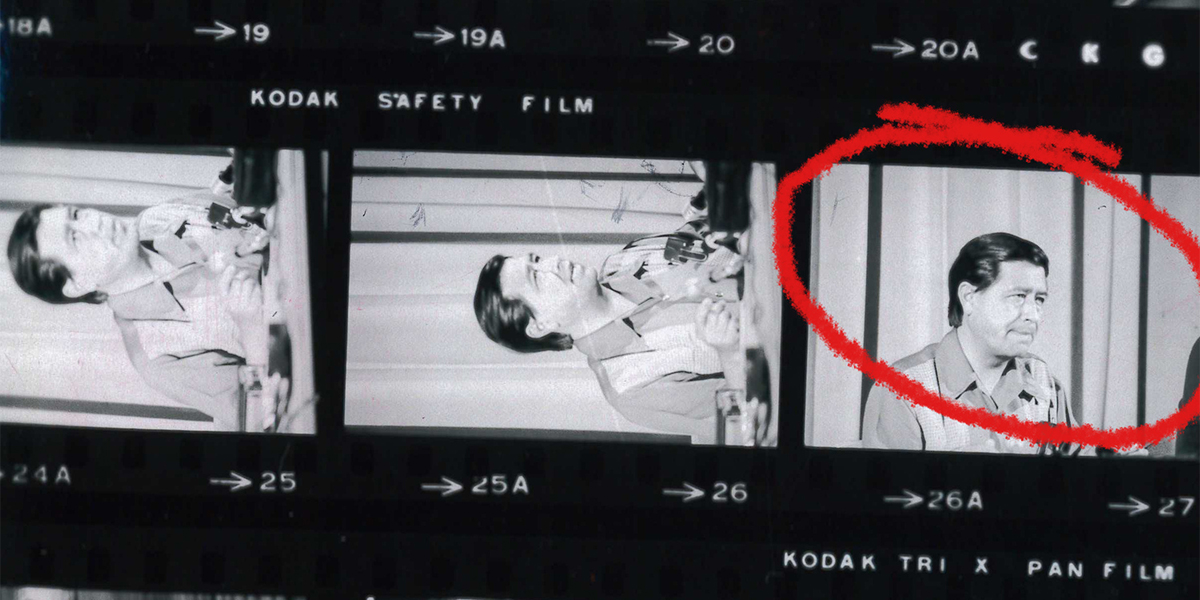 In 1972, the Rev. Fred Eyster, pastor of the United Church of Christ in Bethlehem, Pennsylvania, told his congregation that he and his family were leaving to work for the United Farm Workers (UFW) in California.

Fred and Sue would be the 18th couple to join the National Farm Worker Ministry (NFWM), an act of accompaniment with farm laborers under the aegis of the National Council of Churches (NCC). They would teach free school for laborers’ children, work in the fields and help organize the workers, while receiving a subsistence wage and giving up middle-class suburban life.

The plight of California’s farm laborers — and the charisma of Cesar Chavez and his La Causa — are what led comfortably installed ministers to cross the country for a very different life. From the 1960s through the 1980s, members of the NCC supported the UFW. As Eyster told his congregation, “We’ve done a lot of talking, marching and writing of letters. Now we can put our hands and feet where our mouths have been.”

The 1973 assembly of the United Presbyterian Church in the United States of America (UPCUSA) passed a resolution supporting the UFW-initiated boycott of lettuce and table grapes. The following year, Chavez was invited to address the 186th General Assembly, held in Louisville.

The Presbyterian Layman publication objected to Chavez’s appearance and detailed the efforts of a group of commissioners to find a speaker to counter Chavez, though these efforts were ultimately ruled out of order by Stated Clerk William P. Thompson.

During his 10 minutes, Chavez thanked commissioners for the church’s support of the union and spoke of a common commitment to nonviolence.

Some in attendance were upset about denigrating comments Chavez made about the International Brotherhood of Teamsters (IBT), following the Battle of Coachella Valley the previous August in California when Teamsters attacked UFW picketers.

“Don’t you know, Cesar, that there are growers and maybe even Teamsters among us? Don’t you see that not all United Presbyterians are convinced of la causa?” wrote Nancy Griffing in A.D. magazine. 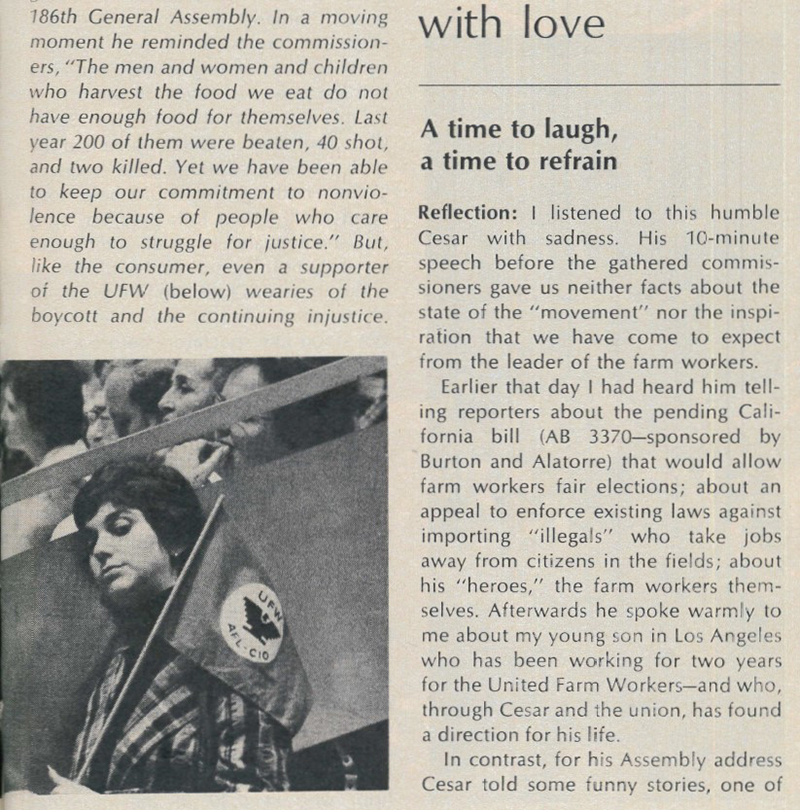 The 1974 General Assembly proceeded to vote down an overture to extend the 1973 boycott, replacing it with a call to “support the small growers in their efforts to gain economic justice” and “work for reconciliation.”

The frustration of some commissioners poured over into an abrupt refusal to hear from Chris Hartmire, a Presbyterian minister who had worked alongside Chavez and the UFW since the 1960s.

Hartmire moved with his family to join the California Migrant Ministry in 1961. In 1962, Chavez and his family moved to Delano, California, where they began organizing farm workers, visiting towns and ranches, and building a small base of power, known as the National Farm Workers Association (NFWA). In 1965, members of the mostly Filipino Agricultural Workers Organizing Committee abruptly walked off the fields and called on their Mexican-American comrades to join them. The NFWA, despite Chavez’s trepidation, voted to join the strike. Chavez called on Hartmire and the California Migrant Ministry to support the strikers as well, and from then on, the bonds between Presbyterians and La Causa were forged. 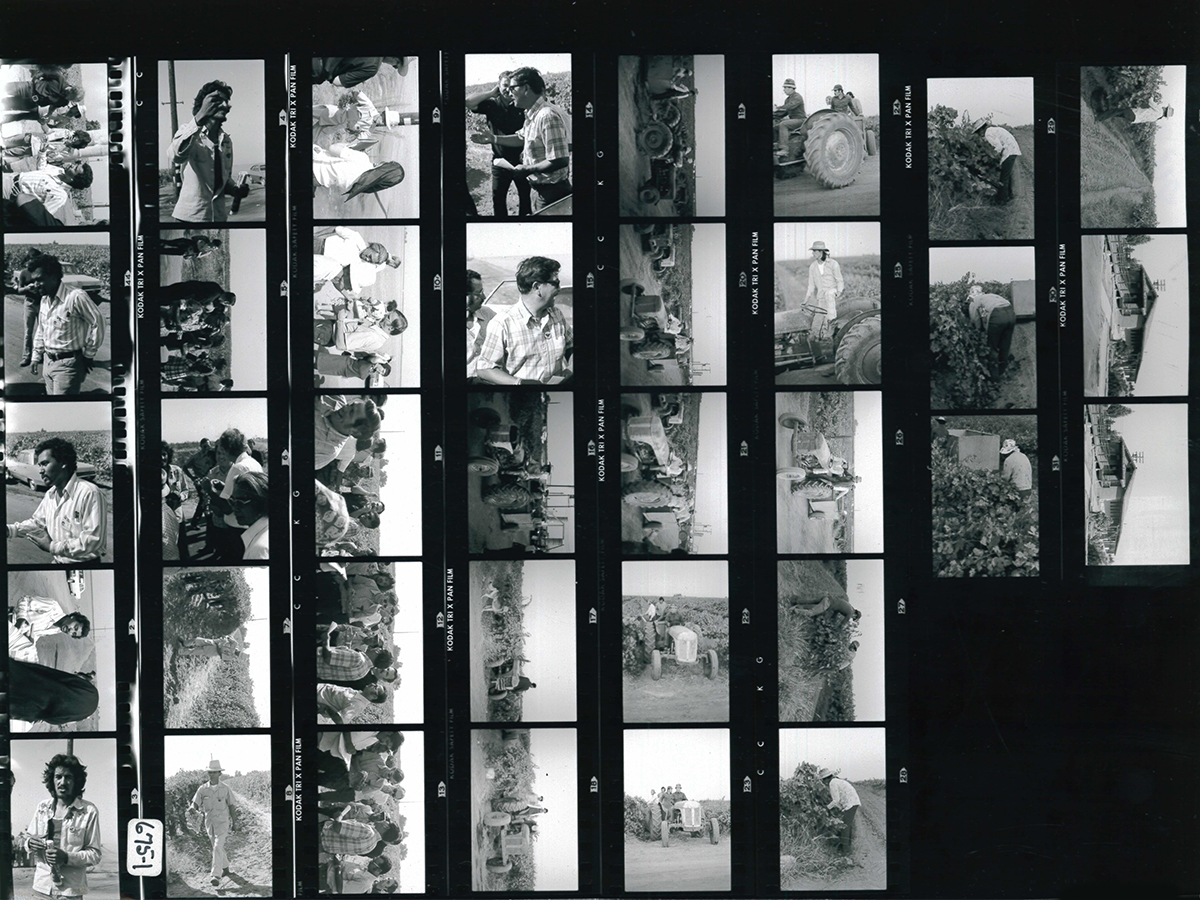 Recognizing that farm labor struggles in California would fail without nationwide action, Hartmire applied the national pulpit of Presbyterianism to the movement. This new effort, established jointly by Presbyterians and Congregationalists in 1970, would become the National Farm Worker Ministry. Hartmire would continue to rally Christians’ attention to La Causa until going to work full time for the UFW in 1980. He passed the baton to Eyster.

National staff of the UPCUSA contended with diverse expressions of outrage toward the church’s positions on these social justice issues. R. H. Ankeny of Apollo, Pennsylvania, wrote in 1974 to Stated Clerk Thompson, “I’ll eat whatever grapes I wish. Don’t tell me not to! NEVER!!!! As I see things we should keep out of Rhodesia & S. Africa’s business. Much of our money is going to support NCC & WCC & the guerrilla outfits in Africa & other lands (I’m told & I read so.)”

In its coverage of the 1974 assembly, the Layman pointed out, “Mr. Hartmire, who has been a close associate of Cesar Chavez from the beginning, is director of the National Farm Worker Ministry of the National Council of Churches, to which the United Presbyterian Church contributed $1,985,046 in 1973.”

California ultimately passed legislation establishing a Farm Board to ensure fair and secret balloting in farm worker union elections. In 1976, growers of the San Joaquin Valley successfully pressured the legislature to defund the Farm Board, prompting a national boycott of Sun-Maid raisins and Sunsweet prunes. Hartmire and the NFWM worked alongside Chavez and the UFW on a state referendum to restore funding to the Farm Board, succeeding that fall.

By the early 1980s, some 40,000 workers had gained union protections through UFW. Chavez died in April 1993, mourned by more than 40,000 marchers. The struggle for just immigration policy, fair pay and livable working conditions on America’s farms continues today.