Home News A reading as a first act of repentance

A reading as a first act of repentance 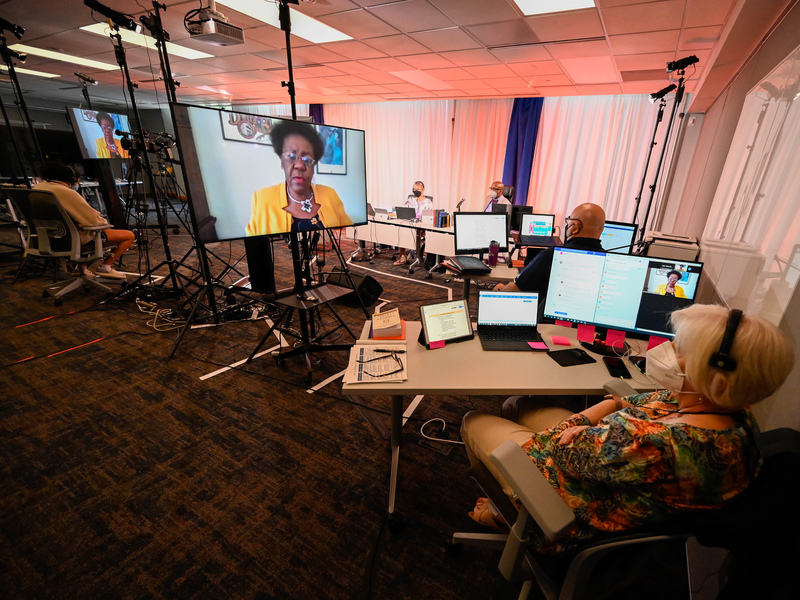 Race and Gender Justice Committee Moderator Willye Bryan presented the committee's report virtually early on Wednesday afternoon during the seventh plenary of the 225th General Assembly of the Presbyterian Church (U.S.A.), on July 6, 2022, at the Presbyterian Center in Louisville, Kentucky. (Photo by Rich Copley)

Plenary 7 focused on the work of the Race and Gender Justice Committee (RGJ), with nine items of business placed on the consent agenda. The committee’s two other items were RGJ-07: “A Resolution Addressing the Lack of Installed Pastoral Leadership in People of Color Congregations in the PC(USA) — From the Racial Equity Advocacy Committee” and RGJ-08: “On Offering an Apology to African Americans for the Sin of Slavery and Its Legacy.”

The two-hour plenary ended with votes overwhelmingly approving both items, and with white Presbyterians reading aloud “A Litany of Repentance” found in RGJ-08, which begins with the words: “As white Christians we repent of our complicity in the belief in white supremacy.”

A LITANY OF REPENTANCE

As white Christians we repent of our complicity in the belief in white supremacy: the belief that people of European descent are superior in intelligence, skills, imagination, and perseverance. We acknowledge that this belief in white supremacy has been the foundation of, and an excuse for, atrocities against people of African descent in the United States and in the world.

We repent of our failure to recognize and take responsibility for the legacy of slavery.

We repent of the injustice, pain, humiliation, and suffering imposed on African Americans by our ancestors and ourselves through actions and inaction. We repent of our complicity in failing to act in mutual loving relationship.

We repent of closing our eyes to the degradation and injustice forced upon African Americans who were enslaved, segregated, terrorized, and imprisoned.

We repent of covering our ears to the crying of families torn apart, to the sound of human flesh being struck, while songs of freedom and heavenly grace flow from our lips.

We repent that we have failed as an institution and as individuals to use our voices to abhor and end lynching, segregation, and racial profiling. We regret our generations of silence on these issues so that we could maintain a comfortable life in our churches, homes, and communities.

We repent of shutting our hearts to the experiences of fellow humans whose stories of pain, suffering, hardship, struggle, love, and joy mirror our own life journeys, yet are deprived of privilege and marred by racism. We have turned our backs and walked away pretending not to see, yet we saw, pretending not to know, yet we knew, and convincing ourselves that we were not complicit, yet we are.

We now know that we as white Christians have benefitted directly and indirectly from these injustices. We name ourselves as complicit and repent.

Finally, we repent of our violent actions to suppress Black agency. African Americans, since the time of slavery, have actively pursued their freedom … built this country … laid foundational structures … and demonstrated their capacity to fully participate in the construction of this American society in spite of white supremacy.

As repentance means turning and going the other way, with Christ’s help we seek to do so. At the same time, we commit ourselves to walking with people of African descent toward the goal of healing, reconciliation, and eliminating racism as we seek to dismantle white privilege.

Earlier, Committee Moderator and Ruling Elder Willye Bryan and Committee Vice Moderator and Ruling Elder Lori Yamauchi presented the committee’s business, with its intersecting items focusing on injustice and inequities faced by communities of color, Indigenous people and women and transgender people. Many items called for reparative justice and initial steps to apologize for the church’s participation in white supremacy, with several items calling out patriarchal traditions and systems.

Earlier in the plenary, the Rev. Iris Dalila Santoni Ortiz, moderator of the Bills and Overtures Committee, said the plenary was on schedule, and referred participants to PC-Biz for review of the day’s upcoming work. Ian Hall from the PC(USA) A Corp and DeAmber Clopton from the Office of the General Assembly also pointed commissioners and advisory delegates to PC-Biz and its real-time financial implications widget that tracks budget and per capita ramifications.

Also preceding the presentation by the Race and Gender Justice Committee was a short video on the work of the Presbyterian Publishing Corporation, with its two imprints — Westminster John Knox Press and Flyaway Books — and its Growing Faith Resources curriculum division.

With Co-Moderators the Rev. Ruth Santana-Grace and the Rev. Shavon Starling-Louis leading the plenary, Bryan and Yamauchi separated the RGJ presentation into three categories of intersection: racialized violence, health disparities and reparative justice.

Madison McKinney from the Advocacy Committee on Women’s Concerns (ACWC) spoke about RGJ-02: “A Resolution on Missing and Murdered Indigenous Women, Girls, and Two Spirit People (MMIWG2S)” and its recommendations addressing the silence around the issue, and ways Presbyterians can advocate for more awareness. That action strongly connected to the plight of transwomen of color, who also suffer disproportionate rates of violence, including murder: RGJ-04: “A Resolution for Transwomen of Color — From ACWC and the Racial Equity Advocacy Committee.” 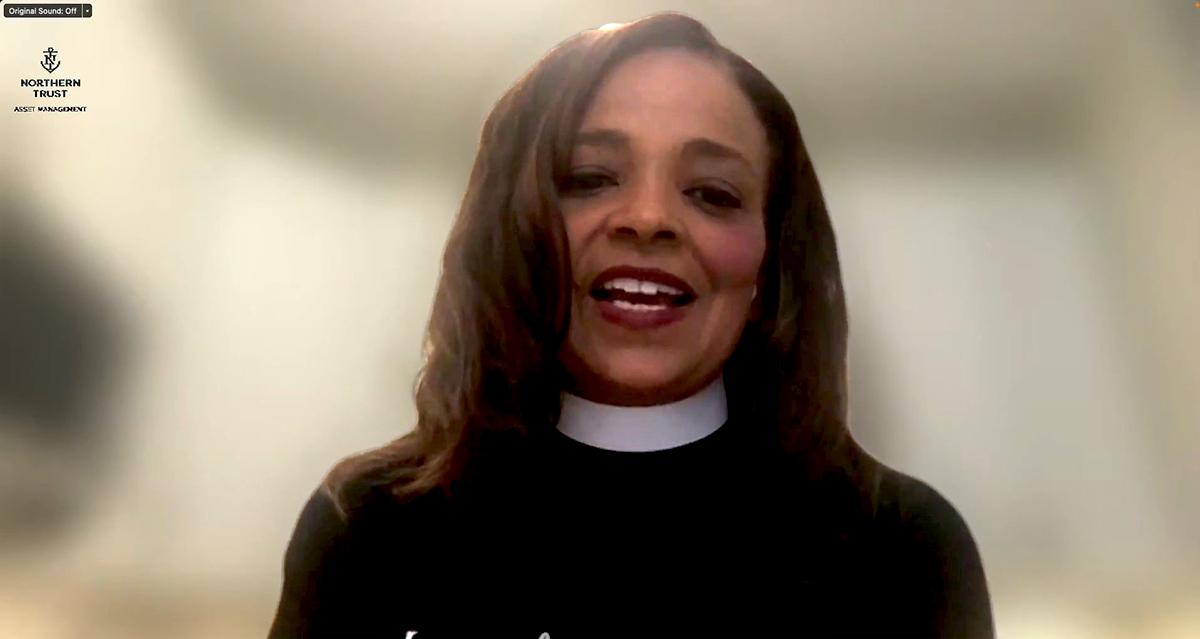 The Rev. Kerri Allen address the assembly during plenary on July 6, 2022 at the 225th General Assembly of the Presbyterian Church (U.S.A.).

Later the Rev. Dr. Flora Wilson Bridges from the Racial Equity Advocacy Committee (REAC) spoke in favor of another public-health-focused item: RGJ-11: “A Resolution on Racism as a Public Health Crisis.” That action calls for redoubled efforts by the Presbyterian Mission Agency (PMA) and the wider church “to monitor and advocate for public policies that work toward health equity by addressing social determinants of health and opposing those that cause harm, violence, and death.”

Ruling Elder Cris Heceta from Central Florida Presbytery spoke in support of RGJ-14: “On Violence and Hate Against Asian Americans and Pacific Islanders,” noting the rise in violence against AAPI individuals over the past two years and the need for more work in support of that community by denominational leadership.

Maxine Richert introduced RGJ-09: “On Directing the Office of the General Assembly to Issue Apologies and Reparations for the Racist Closure of the Memorial Presbyterian Church, Juneau, Alaska,” and the team that researched and wrote the overture, including members of Northern Light United Church in Juneau — a congregation that grew even as Memorial, a majority Tlingit congregation, was closed in the 1960s and its popular Native pastor, the Rev. Dr. Walter Soboleff, removed.

RGJ-10: “Resolution on Race, Reparative Justice, and the PC(USA) — From the Advisory Committee on Social Witness Policy (ACSWP)” and RGJ-12: “Report of the Special Committee on Racism Truth and Reconciliation,” both “centered on reparative justice for Indigenous people and people of color,” Bryan said. The two items were left “autonomous,” like other RGJ motions, owing to the specificity of their recommendations.

Mark Douglas from ACSWP emphasized the importance of reparative justice to all the items handled by the committee, not just those that directly mention the term.

Douglas spoke about RGJ-10, including its Recommendations 1–4 that relate to the background issues the church needs to understand regarding reparative justice. Other recommendations in RGJ-10 emphasized giving “material expressions to our faith commitments.”

Regarding RGJ-12, the Rev. Kate Jones Calone from the Special Committee on Racism Truth and Reconciliation spoke about the special committee’s work, including the many times it had heard from people of color about the pattern of the PC(USA) not doing enough to confront racial injustice, as opposed to its many statements and studies professing opposition to racism.

The special committee’s recommendations call for uncovering and addressing white supremacy at every level of the church, including congregations. “History will judge this Assembly as a time of decision,” Jones Calone said. “We are being called, here and now.”

Between mini-presentations of each item of business from the consent agenda, Bryan and Yamauchi introduced members of the RGJ committee who spoke about their experiences inside the Presbyterian Center. 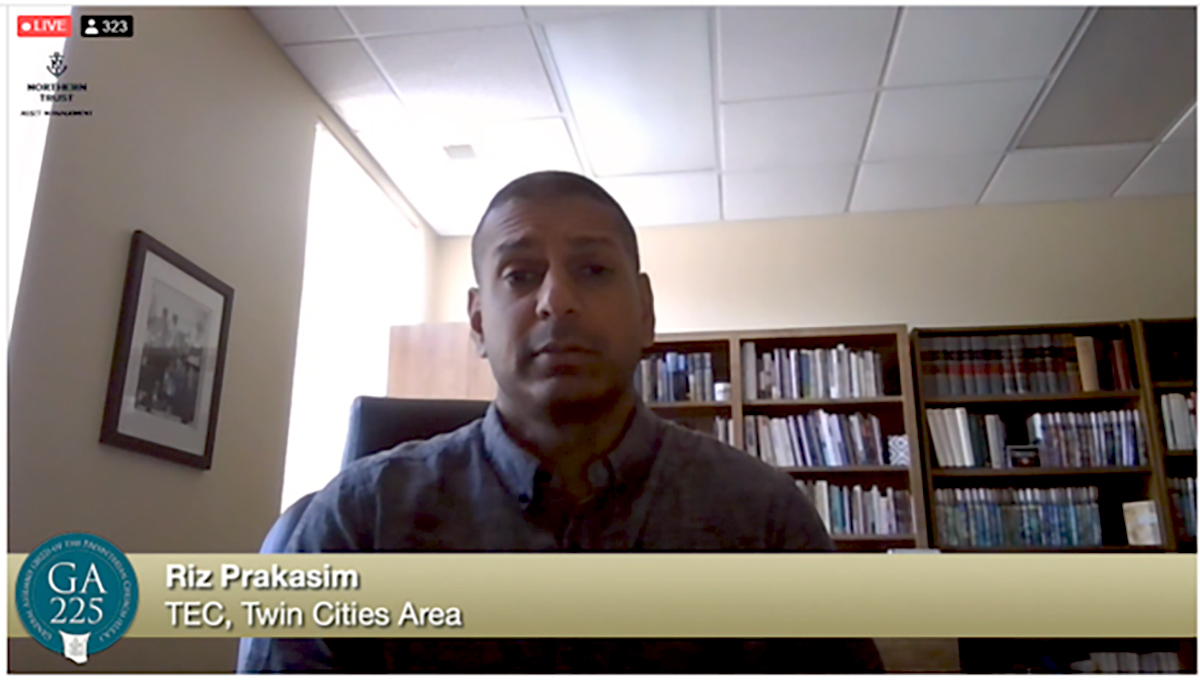 The Rev. Riz Prakasim, Teaching Elder Commissioner , speaks during plenary session on July 6, 2022 at the 225th General Assembly of the Presbyterian Church (U.S.A.)

The Rev. Riz Prakasim discussed hearing from resource staff and other commissioners who spoke to the realities of inequality and injustice in different parts of the country and world. The Rev. In Yang spoke about his gratitude as an Asian American that the committee had approved an overture supporting his community but also other overtures supporting other communities that have been “victimized and stigmatized.”

Anwi Fomukong, a Young Adult Advisory Delegate, spoke of the mutual support committee members provided each other. The Rev. Keron Khellewan, an Ecumenical Advisory Delegate from Trinidad and Tobago, said, “I had a great opportunity to connect with new voices from different places, and be reminded that we all have one faith, one hope.”

In the last half-hour of the plenary, attentions turned to the two items not on the consent agenda.

Regarding RJG-07, about installing more pastoral leaders at churches of color, Yamauchi discussed how one stumbling block had been a call for debt forgiveness in the original motion. By working with a subcommittee, including staff from the Presbyterian Investment and Loan Program (ILP), the recommendation was amended in the finally approved item.

Jim Rissler, the ILP's president and CEO, said the Investment and Loan Program will work on creating a fund to help congregations of color pay off debt. ILP “is not only comfortable with that amended recommendation, but in favor of it,” he said.

Plenary discussion by commissioners included the Rev. Abby King-Kaiser speaking in favor of RGJ-07 and the items on the consent agenda. King-Kaiser was impressed with the work specificizing steps to confront racism and inequity, not simply identifying the problem of racism. 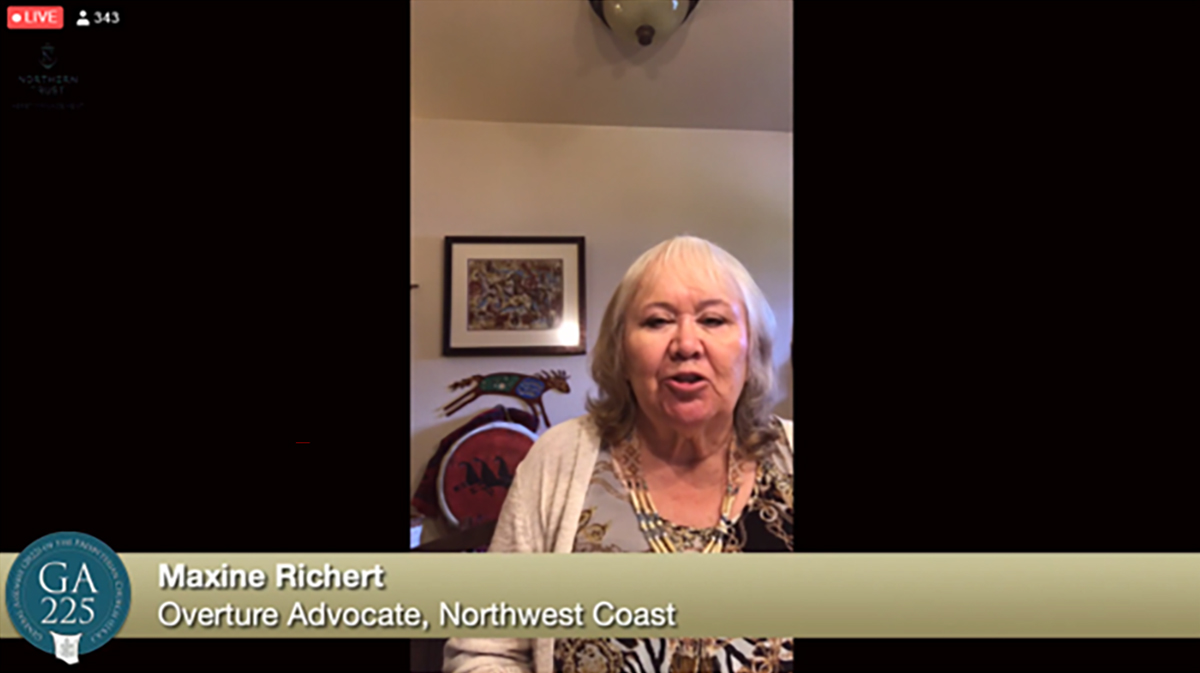 The GA225 co-moderators relayed a question about how recipients of reparations and repatriation would be determined. Dr. Corey Schlosser-Hall from the PMA said that the under-development Center for the Repair of Historical Harms would be willing to help coordinate efforts among the PMA, other national agencies and other groups to establish reparations processes.

Plenary voting on RGJ-07 saw commissioners approving the item as amended by the RGJ committee, with 368 voting yes and 21 no.

On RGJ-08, “On offering an apology to African Americans on the Sin of Racism,” overture advocate Diane McCullough spoke about Recommendations 3 and 4, including the development and dissemination of resources for all ages looking for “spiritual change” that will lead to reparative justice, including reparations.

Earlier, Ruling Elder Tony De La Rosa, transitional synod executive of the Synod of Mid-America, had spoken about support the synod was committing to help pay for costs found in RGJ-08’s financial implications.

The only “floor” discussion on Zoom was from the Rev. Bob Morgan, who said he had asked for the motion to be removed from the consent agenda. The item was too important to not be discussed during plenary and voted on, he said. Morgan supported the motion.

After that, commissioners approved RGJ-08 as amended by the committee, with 373 yes votes and 19 no votes.

Starling-Louis invited white Christians wherever they were to read the litany of repentance spelled out in RGJ-08, and for African Americans, other people of color and individuals from Native communities to receive the words. Starling-Louis emphasized that the invitation was optional.

RGJ Committee Moderator Bryan, who is African American, ended the presentation by the Race and Gender Justice Committee, remarking that the reading of A Litany of Repentance “was very appropriate, and very much appreciated.”