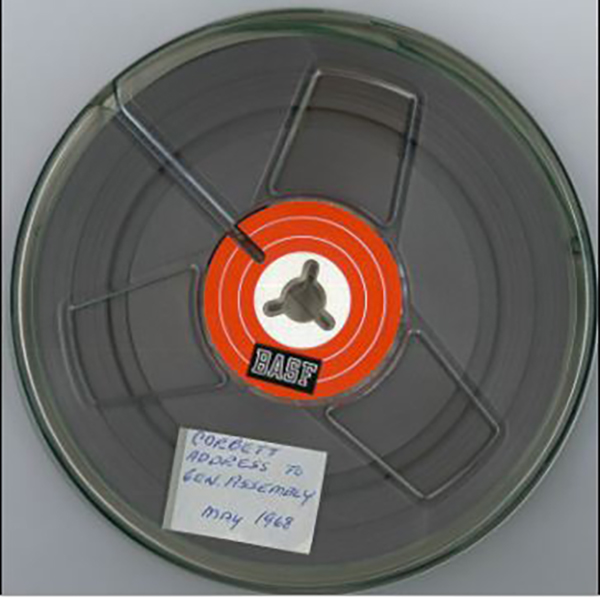 A recording of Corbett’s speech in Pearl

A recording of Corbett’s speech in Pearl

This gathering of materials has a broad range, from the earliest digitized item connected with an 1860 General Assembly meeting to newer items that are added after each assembly. A collection that spans over 160 years can seem daunting, so PHS is highlighting some items from past assemblies that allow you to relive impactful moments at the click of a button.

“In truth, our cause is your own.” So begins Rev. Dr. Cecil Corbett’s speech to those gathered in Minneapolis in 1968 for the 180th General Assembly of the UPCUSA. Corbett, a Presbyterian minister and member of the Nez Perce Tribe, served as president of Cook College and Theological School in Tempe, Arizona, and as national agency staff liaison to Native American churches. He passed away in 2020.

The year that Corbett asked for the support and dedication of the Presbyterian church for the Native American cause was a monumental year in the decades-long fight for Native American rights. In 1968, President Lyndon Johnson signed the Indian Civil Rights Act into being, a law that held a promise of recognizing the citizenship of Native American people in the United States. This legislation was one of many as part of a larger wave of laws being created in the 1960s in response to demands for civil rights across the country.

Corbett offered some historical context for the overarching national discussion of Native American rights and citizenship, before turning his focus on the presence of the Presbyterian church in his life, and the lives of others.

“The ministry to the American Indian must be developed ecumenically wherever possible,” Corbett said. “The church has been a divisive force on the reservation — we must not project the image of a divided Christ.” 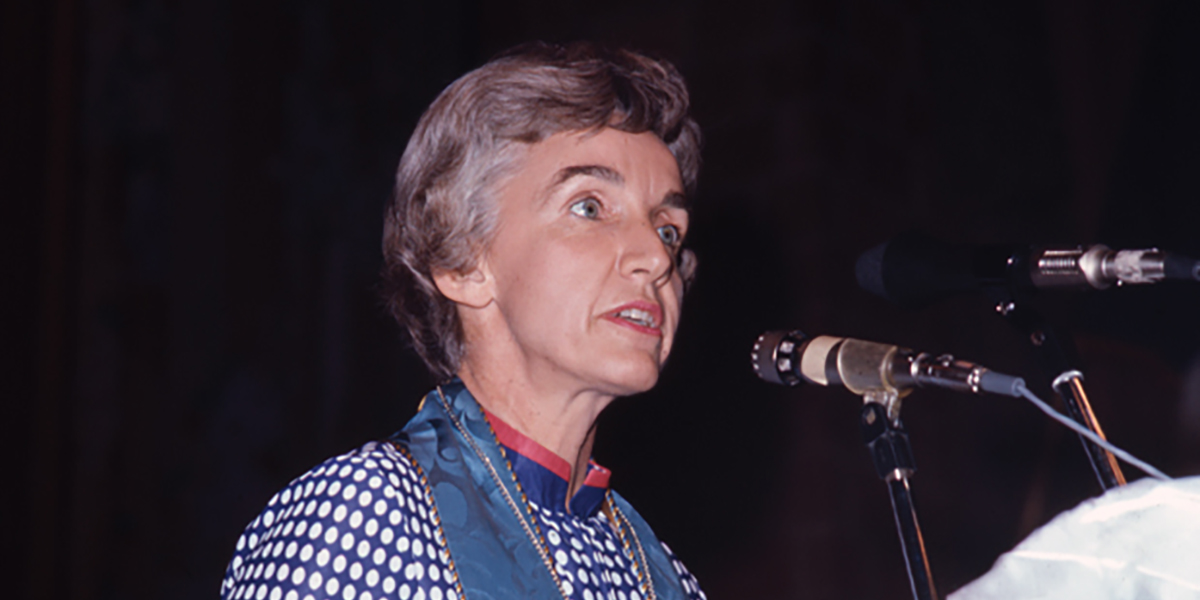 Pearl is host to several images of historic moments in Presbyterian history, including this image of Lois Stair addressing the 183rd General Assembly (UPCUSA) in 1971 after being elected moderator.

Stair was the first women to be elected to the position, a historic moment decades in the making. The PCUSA General Assembly opened the position of ruling elder to Presbyterian women in 1930, expanding eligibility for them. However, it took four decades for this to translate into a Presbyterian woman holding a leadership position of such a high level as GA moderator. For Stair, her every public move would be analyzed, applauded and criticized — both within the UPCUSA and beyond.

Despite this, Stair did not shrink away from speaking out on issues she valued as important to the denomination. She urged congregations to embrace diversity and break out of their comfort zones; she called for the development of church programs focused on building equality and protecting and uplifting minorities. When faced with intense discussion within the denomination about these issues, Stair uttered words of encouragement.

“It’s hard for us, particularly as women, to see conflict as a hope. We have been taught to be peacekeepers. But you know if we are to be peacemakers as Christ calls us to do, we must see hope in facing conflict, in letting our differences show, in being honest about hurts that haunt us in the world,” she said.

Read more about the election of Stair as the first woman Moderator here. 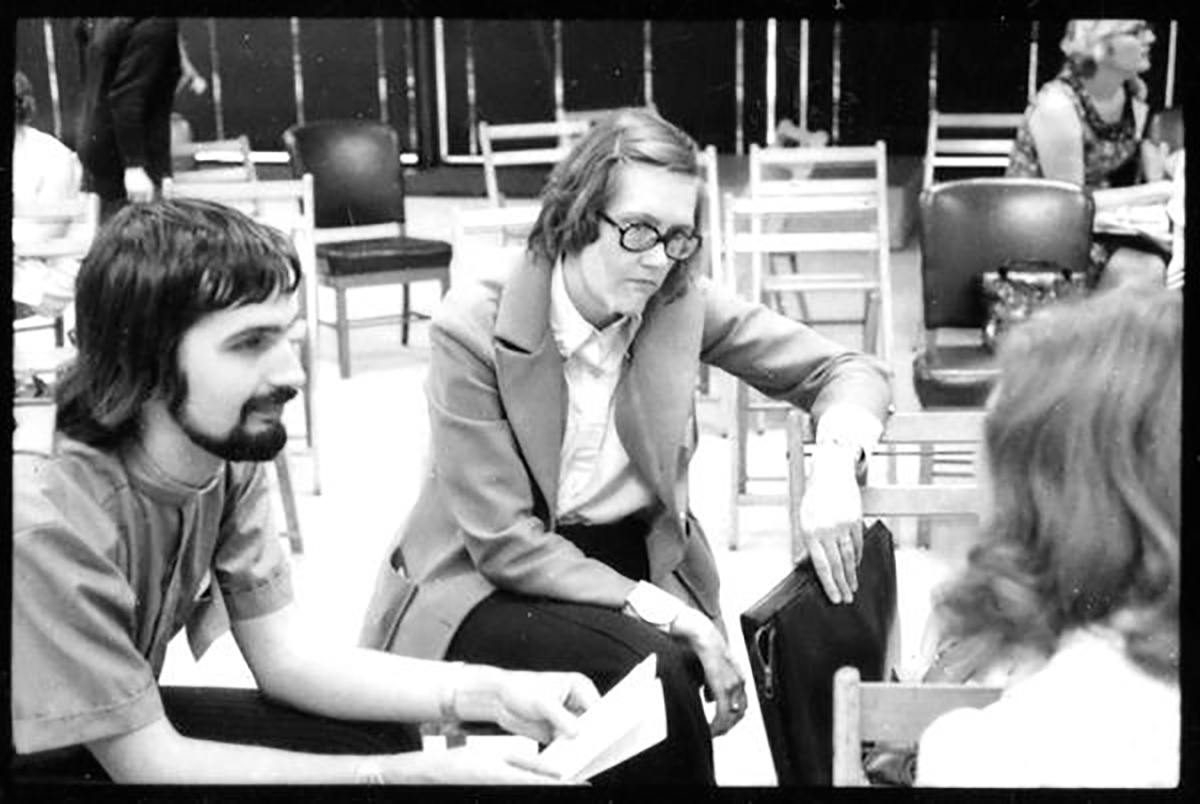 In the mid-1970s, the Presbyterian church was deep in discussion about homosexuality and LGBT ordination. During this time, flurries of letters and questions arrived at the doorstep of the General Assembly of the UPCUSA — Our candidate is openly gay, can you provide us with guidance on how to proceed?

Rev. David Sindt had a question of his own. He presented it to the crowd of congregants at the 186th General Assembly (1974) meeting via a hand-written sign he held above his head — Is anyone else out there gay?

A graduate of McCormick Theological Seminary and a devoted Presbyterian, Sindt was ordained by the Presbytery of St. Paul in 1965. By 1971, Sindt had come out as an openly gay man. At the same time, he began worshiping at Lincoln Park Presbyterian Church. A year later, his church called him to serve as their assistant pastor and establish an outreach program to the local gay community. In 1973, however, Lincoln Park’s call — suspected to be the first call to service of an openly gay man by a Presbyterian entity — was rejected by the Presbytery of Chicago.

Fast forward to 1974, when Sindt stood before his siblings in Christ, one in a crowd of hundreds, hoping he might find people to connect with at the 186th General Assembly. That year, the Presbyterian Gay Caucus met for the first time; Sindt would go on to spend the next five years as the group’s national coordinator, helping to establish a nationwide network of LGBTQIA+ individuals and allies. The organization was renamed Presbyterians for Lesbian and Gay Concerns (PLGC) in 1977, and continues its advocacy work today as More Light Presbyterians. All of this was made possible by the iconic moment when Sindt lifted his sign to the crowd, for all to see. 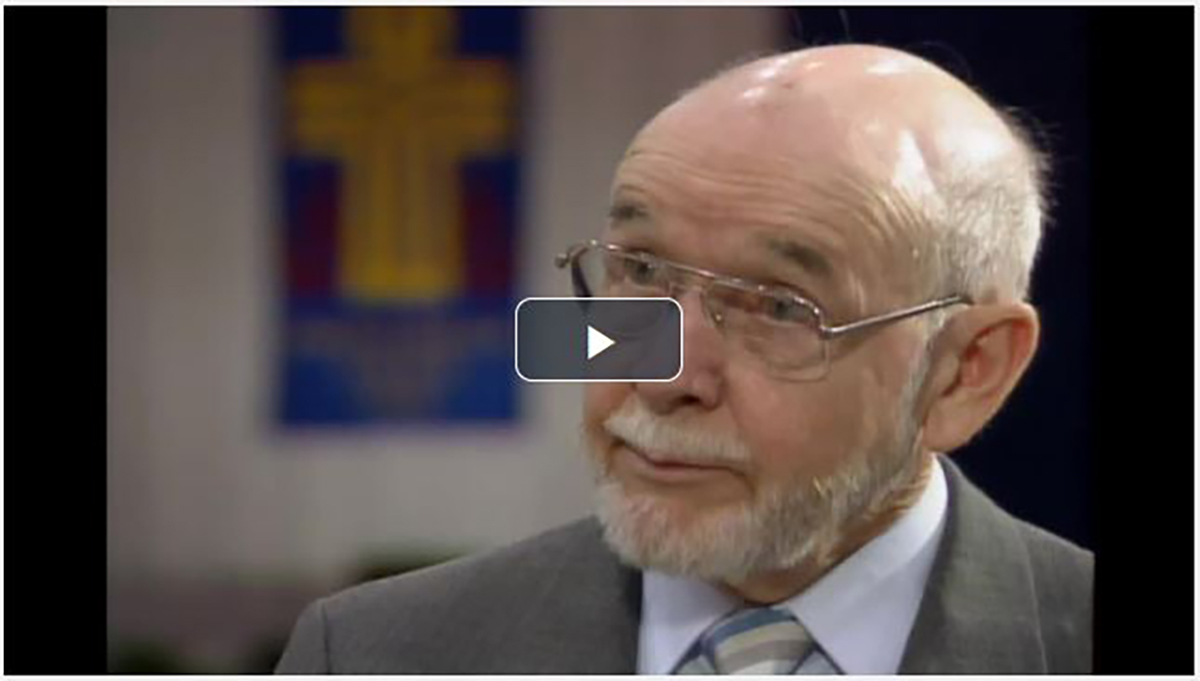 In Pearl, you’ll find a 26 minute-long interview of Rev. Ben Weir, conducted at the 204th General Assembly meeting in Milwaukee in 1992. In May 1984, deep into his mission service in Lebanon with his wife, Carol — the couple had lived there for three decades already — Ben was kidnapped.

For almost a year and a half — 495 days, to be exact — Weir was hidden in windowless rooms around the city of Beirut. His captors blindfolded him, beat him and isolated him in solitary confinement. All the while, Carol did not know when, or if, she would see her husband again. She and the four Weir children — Christine, Susan, John and Ann — petitioned governments and NGOs around the world to facilitate his release.

In September 1985, Weir was released by his captors, finally returning to his family. The following January, San Francisco Presbytery nominated Weir for the position of moderator of the General Assembly. 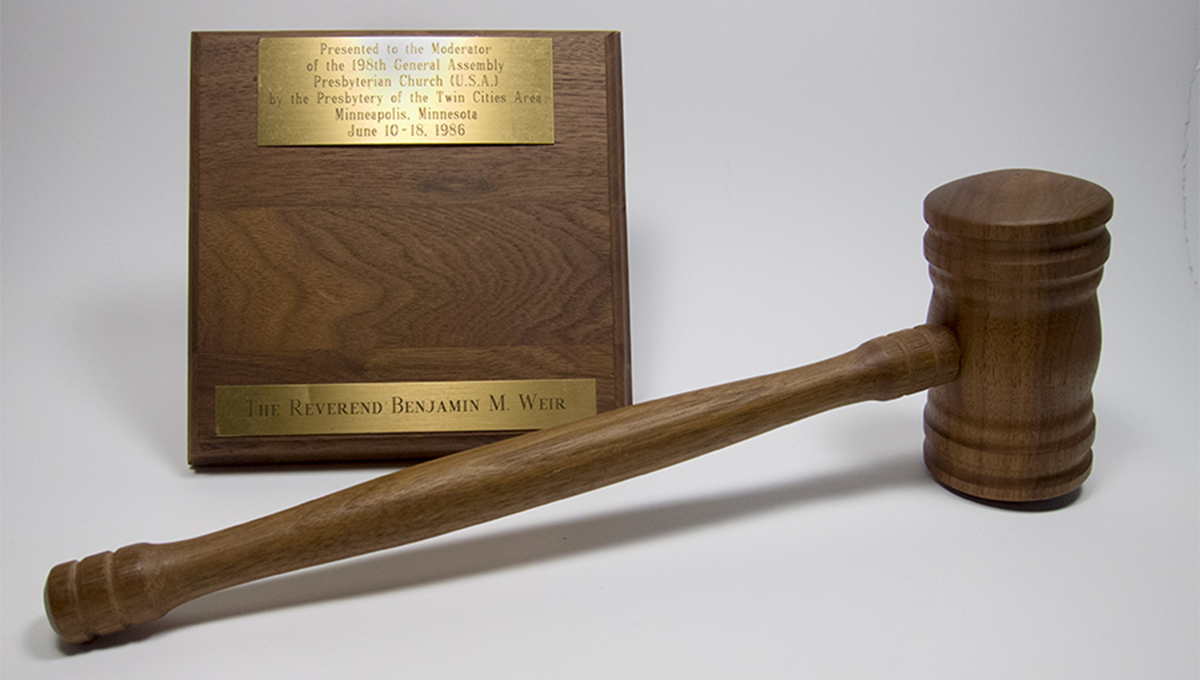 Moderator’s gavel from the 198th General Assembly in Minneapolis, 1986

Eight years after he was taken captive, Weir spoke about his experience as a hostage, the experiences of other hostage families, peacemaking and breaking the cycle of violence.

“There was a … reference back to former times and what it was like and the separation of families … and the fears and the pain … those times of separation and captivity are now behind us. It’s become part of our lives — we recognize that, but that it is also behind [us]. It’s kind of a launching pad now, into the future …. The future is in God’s hands.”

Along with the interview, available in Pearl, you can view images of artifacts in our collections relating to the Weirs’ mission service in Lebanon in the PHS online exhibit “Journeys of the Faith: Artifacts from the Mission Field.”