June 2016 - A journey of faith—Gradye Parsons

This is approximately my 96th monthly column. It is the bookend for my eight years of writing these columns. I want to thank you for sharing your stories with me. You have trusted me with your joys and challenges in conversations across the congregations and mid council bodies of the Presbyterian Church (U.S.A.). Please know that each of your stories has impacted me and will always remain part of my understanding of faith. What follows is my journey of faith that I prepared as part of my reentry into the Presbytery of East Tennessee. 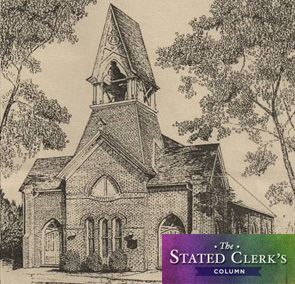 I was examined to become a candidate for ministry at the Mars Hill Presbyterian Church in Athens, Tennessee, in 1976. I started seminary that fall at Gordon-Conwell and graduated in 1979. While in seminary I had my first paid job in the church. I was a church janitor.

I was called, installed, and ordained at the Newport Presbyterian Church in 1979, serving five years with that congregation. The congregation taught me how to be a pastor. I was expected to call on a ruling elder at random on Sundays for the offering prayer. I would hear these beautiful prayers in perfect King James English. It was while I was in Newport that I really fell in love with the mountains and mountain people.

In 1984 I accepted the call to the Windsor Avenue Presbyterian Church in Bristol, Tennessee. This congregation had many educators as members. They taught me how to teach, preach, and be involved in the community. The first organizing meeting for the city hospice ministry was in the church. One summer the music director had the teenagers form a band during vacation Bible school. They would play during worship. The first couple of years the band was pretty bad. But over the years, with the congregation’s nurture, they improved to the point where every band member had made regional or state honor bands. The high school band director credited the congregation for encouraging the students.

In 1994 I was called and elected to be the executive presbyter and stated clerk of Holston Presbytery. I spent most of time either putting out fires or trying to get congregations fired up. I got to work with lots of truly committed teaching and ruling elders.

In 2000 I accepted the invitation to be an Associate Stated Clerk in the Office of the General Assembly. In 2008 I was elected Stated Clerk of the General Assembly and reelected in 2012. I have been privileged to preach and lead workshops in congregations and presbyteries all over the world. I have digested almost every kind of potluck dinner imaginable. It also has been an honor to work with incredible staff dedicated to serving this church.

In the forty-year journey from my first trip to Mars Hill I have fallen more in love with God and God’s church. My call into this chapter of my ministry is as clear as that first call. My traveling companion has been my wonderful wife, Kathy, who is the best theologian I know. My son Josh, an attorney, and my daughter Rachel, a PC(USA) minister, have grown up in the church and are still in the church.

In all these things I give thanks to God.

There are eighty-nine years of living between my mother and my grandson. Yet they are experiencing similar journeys of self-discovery. My mother lives with dementia. It would be inaccurate to say she suffers from it. She treats it more like a traveling partner. While she has forgotten a lot of good things, she also has forgotten a lot of hurts and angers.

One of the great aspects of my time as Stated Clerk is hearing about the mission and ministry of Presbyterians and their congregations. Sometimes it is ministry in its own community. Other times it is a mission trip to some spot in the world. Universally I hear how these experiences are transformative.

March 2016 - The hard work of reconciliation

There appears to be a math equation in this quote from John Calvin. Toleration plus pardon plus mercy equals freedom—the freedom defined as children being able to ask their parents anything. I wonder if this formula cannot be applied to our life as community.

Sustainability is a word that is used in many contexts. We talk about it with farms that have found the balance between what the soil can give up and what the soil needs to be healthy. It is used to refer to communities who have the resources they need to maintain a healthy economic life. Energy sources that are renewable also are viewed in terms of their sustainability.